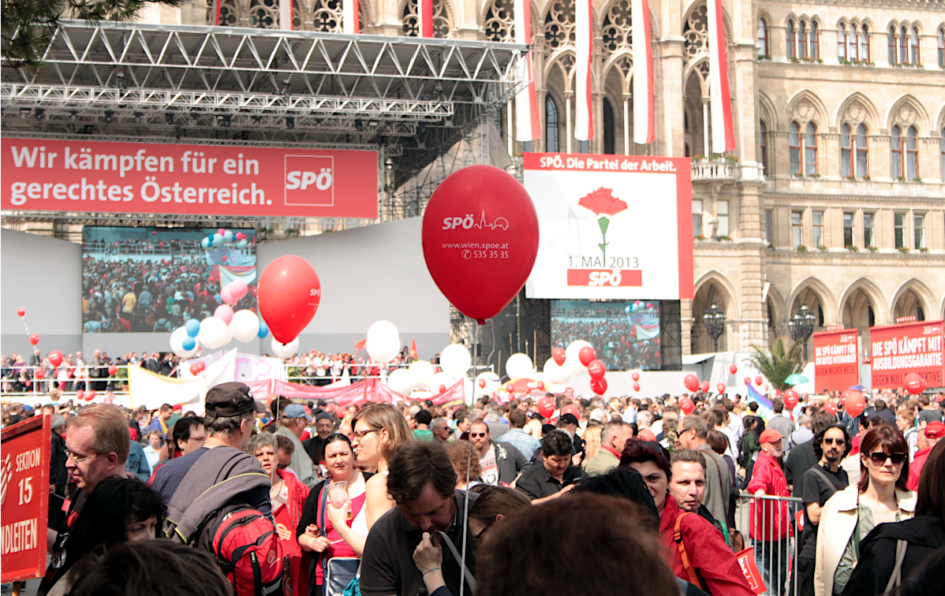 Contribution by Chris Baumgarten a journalist and leftist author from Vienna. Among other things he runs the blog balkanstories.net

Austria’s Social Democratic Party (SPÖ) has fully embraced transgender ideology. Amidst the deepest crisis the party has faced so far, this risks one of the last assets the party has in the eyes of the public: It’s credibility as a champion of women’s rights.

It’s not as though there had been no warning before SPÖ’s Women’s Organisation set to pass two highly ideological resolutions on its National Conference a few weeks ago.

Several members had tried to contact the Organisation’s National Secretary to start a discussion before the delegates were set to pass Resolutions 38 and 39, both entered into the Conference by SOHO, the Social Democrats’ LGBT chapter.

“I tried several times”, a feminist party member and activist told me “and was given the impression that there was to be no debate. I didn’t even get an appointment”.

It was indeed to radically trans ideological resolutions that were to be put in front of the women delegates: No. 38 “Self determined, visible and proud” calls for Self ID and a ban on “conversion therapies” and transmedicine centers in all of Austria’s nine provinces – in a country of less than nine million inhabitants.

The demands also include the further introduction of “gender identity” in schools’ curricula and “national measures against hate crimes, hate speech and all forms of group specific violence”.

As if this weren’t bad enough, sister Resolution 39 states that “Our Feminism is inclusive”.

Like everywhere else this phrase has been uttered it is a code for “It’s only Feminism if it focusses on men’s needs”.

Author Dominique Mras, a trans identified male, didn’t shy away from using the slur TERF in his address before the National Conference, effectively both browbeating and deceiving the delegates into accepting his resolution that apparently had been neither fact- nor spell checked prior to it being handed out.

The paper refutes, for instance, any doubt that trans women are women on account of their, well, different socialization and experiences: “What experiences are those supposed to be? Assaults, exploitation, worse opportunities on the labor market, reproduction or misogynistc remarks – trans identified women (read: trans women) experience that, too.”

“What a women is“, Mras‘ resolution goes on “can not be determined by biological categories nor with the argument of socialisation”.

Needless to say, this “Inclusive Feminism” Mras and fellow trans activists envision means that men have full access to women’s shelters, women’s prisons, toilets and other protected spaces, as soon as they declare themselves to be women.

While the paper doesn’t call for gender critical women and men to be expelled from the party in so many words, the subtext is clear: Rational minded people have no more place in the party, unless they pretend that transideoloy is reality and reality is an illusion.

After Mras’ angry speech against “Terfs”, the resolution was passed without much of a debate.

This hardly comes as a surprise. While the activist mentioned above couldn’t even get the National Women’s Secretary to discuss the issue with her in person, other women critical of Resolutions 38 and 39 were refused delegation to the Women’s National Conference.

Those two papers may be the most radical example of SPÖ’s likely to be deadly budding romance with identity politics and queer and trans ideology, but especially the party’s youth organisations have been infiltrated and taken over by respective agents a few years ago, slowly seeping into the party mainstream.

This alienates quite a few among those members who still pay attention to what’s going on in the party.

Some vented their frustration on social media, only to be met with a barrage of slurs and insults, such as terf.

At least two people who have been active for a decade or more see themselves confronted with petitions demanding their expulsion.

It is unclear whether or not this will result in formal procedures.

“I was terfed and insulted all over”, a member told me, “also by people whom I’ve known for years, ever since we were active together in youth organizations.”

In the public, it was of course trans woman Mras who made himself out to be the victim. In an interview he told the left leaning liberal daily Der Standard – roughly the Guardian’s Austrian equivalent– that “I received a lot of hate messages, including the ridiculous question what’s between my legs”.

While I do not know or condone of the tone of these messages, most people would consider the latter question to be fairly relevant when it comes to women’s issues and women’s rights.

That trans ideology is being forced onto the party without a debate like on the Labour Parties of Britain, Australia and New Zealand, further divides a membership already heavily demotivated by the party’s deepest crisis in its history.

Austria’s government is still reeling under the nepotism and whiff of corruption a parliamentary committee exposed in the past few months, Chancellor (i.e. Prime Minister) Sebastian Kurz is being investigated for committing perjury before the committee and the confusing Corona management didn’t help boost the popularity of the Conservative-Green coalition in power.

Yet, most opinion polls show that if General Elections were to be held next Sunday, SPÖ would hardly stand to gain anything from the crisis engulfing the government.

Most polls show it to have around 20 per cent of the vote – as little as the party got in the most recent General Elections in 2019 – by far the worst election results in the party’s history.

With SPÖ’s left wing incapacitated or sidelined, its bourgeouis-liberal wing and its pseudo-blue-collar right wing struggle for control over the party.

The liberal wing is heavily invested in identity politics, the right wing is trying to attract voters with a hard anti-immigration stance that doesn’t shy away from openly xenophobic rhetoric.

Like all other Social Democratic Parties, SPÖ had once heavily embraced Neoliberalism as its guiding principle after the collapse of the Soviet Union, trying to be – or at least pretending to – its “humane face”.

Like all other Social Democratic Parties it has never recovered from that embrace, even though it occasionally attempted to veer left a few inches.

It had nothing to fight off the rise of the New Right which happened earlier and more forcefully in Austria than in most other European countries – let alone a solidary and universalist vision of a better future.

Private sector blue collar workers have abandoned the party in masses that once united the vast majority of them.

According to most statistical models, SPÖ came in third in private sector blue-collar votes in the 2019 elections, after the conservative-turned-anti-immigrant-right-wing People’s Party and the radical right “Freedom” Party.

Only in two demographically relevant groups of the electorate did the party hold a plurality of the vote: naturalised migrants and women.

In spite of its constant toying with xenophobia, SPÖ is still seen by many migrants as the one and only party able and willing to guarantee their rights and at least a sense of dignity.

And women still see SPÖ as the most credible party when it comes to sex based rights (or to use the old fashioned term: women’s rights) and the willingness to improve women’s lives through better childcare and fighting the gender pay gap.

The adoption of a radically antifeminist stance a few weeks ago so far hasn’t registered much outside the party.

Nor has the turmoil within the party reached the critical levels it did with the British Labour Party which has been hemorrhaging female members for the past three years or so and even more so since Red Scare Keir Starmer took over the party and started purging from it anyone not deemed woke enough.

Opposition within SPÖ is about to form, however, and that makes it a question of time until the discussion reaches a wider audience outside the party.

In the long run, this risks putting SPÖ’s historical achievements for women’s rights and its reputation as a champion of particularly working class women on the line.

Given its current situation, this seems about the last thing Austria’s Social Democrats need.

Also, the inevitable discussions that will follow SPÖ’s Women’s Chapter’s ill thought through move in the near future, it seems likely that the possibly last functioning organisation within the party except its Union Chapter will be occupied more with itself than with anything that can even be remotely described by reality.

Yet, for the erstwhile winners the conclusion they’ll draw from the party’s current crisis is crystal clear: The party is losing voters because it hasn’t done enough to fight for marginalized groups, i.e. because it hasn’t embraced identity politics hard enough.

In other words: SPÖ should do enough to (re-)educate the blue-collar voters it lost over the past 30 or so years so they’ll understand the error of their ways, particularly when it comes to trans issues.

Transing the crisis must end it. Never mind that this hasn’t worked for a single political party anywhere.

For the time being, this is the slippery slope SPÖ needlessly chose to walk down.

Let’s see if it finds its way back to more secure footing and how much damage it will take on its already ill-fated adventure in the dark alley of identity politics.