Trucker convoy a farce – but no joke 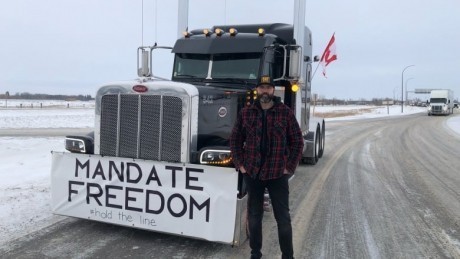 The “Truckers For Freedom convoy” itself is a farce. It is a handful of pickup trucks and SUVs being driven across the country to protest vaccine mandates for cross-border haulers.

The target of their spite tells you all you need to know. Their aim is to whip up resentment at the federal government, and Justin Trudeau in particular, and funnel that anger into organized support for the far-right.

They ignore all these facts because they never care about facts. Their aim is to create a big lie. They wrap themselves in frothy rhetoric about liberty and freedom, while far-right and white supremacist groups flock to their banner.

Their goal is to converge on Ottawa and create traffic chaos. The more rabid among them are calling for the same sort of assault on the legislature as occurred in Washington on January 6 2021. Anyone who ever lived in Ottawa knows that all it takes to create traffic chaos in that city is 3 stalled Volkswagens. And their threats to tear down the legislature will come up short.

Social media reflects the division in this country called Canada.

A vocal minority is foaming at the mouth, turning public health restrictions required to curb the pandemic into a global conspiracy. Driving across Manitoba, the “convoy” encountered highways closed due to ice storms. Its supporters instantly responded by calling out a grand conspiracy to halt their heroes. Because of bad roads. In Manitoba. In January. What are the odds?

An equally vocal majority is ridiculing the whole thing, dubbing it the #ConvoyOfKarens and the #FluTruxKlan. It is tempting just to laugh it off. But it is a mistake to make little of the forces behind the stunt, and their real intent.

First and foremost is to raise funds and draw recruits to far-right organizations and parties.

To date, with almost a week to go, a GoFundMe page for the “Freedom” convoy has raised $4.5 million dollars. GoFundMe has suspended the collection until it can get a clear accounting from the sponsors as to what the money will be used for. The sponsors are the Maverick Party in Alberta, a collection of far-right bigots who regard Jason Kenney’s UCP government as too left wing. The Maverick Party says the money will be used for fuel and lodging for the convoy. That’s a lot of diesel fumes.

More than 50,000 people have donated money. Organizers from neo-Nazi and white-supremacist groups will follow in the convoy’s wake, attempting to identify and organize people who come out to support the “convoy”.

Maxime Bernier, leader of the collection of bigots and far-right libertarians called the People’s Party of Canada, is working overtime to pull the convoy supporters into his orbit. Still on the fringes of electoral politics, the PPC has the national resources to benefit most from the “convoy”, as it has been attempting to lead the anti-vaxx protests across the country.

Even more mainstream, but equally vile, politicians like Jason Kenney are attempting to co-opt some of the convoy’s support. He recently tweeted photos of empty supermarket shelves, posting: “I am getting pictures like this from grocery stores across Alberta this morning. This is turning into a crisis. It requires immediate action by the Canadian & US governments.” People across the province responded by posting photos of fully stocked stores, and one internet sleuth determined that the pictures posted by Kenney were actually from Houston, Texas in 2021, in the aftermath of a hurricane. There was no retraction or apology from Kenney.

And of course the federal Tories are trying to get in on the act, securing their right-wing base, and posting silly ramblings comparing Canadian grocery stores to “1980s style Moscow stores”, conjuring images of Canadians lined up in the cold for withered vegetables and bad bread.

The only problem in our stores is the soaring prices, and the merciless profiteering from the corporations that control our food supply.

While the actual “convoy” is a motley handful of trucknuts, mainstream media are giving them big coverage, tracking their progress, amplifying their lies. The big corporations that own and control them want an end to public health restrictions, and a return to business as usual. Who cares if a few – or a few thousand – people die.

The last time the right-wing pulled a cross-country convoy stunt was in 2019, when the “Yellow Vest” movement converged on Ottawa to “defend” Canada’s oil and gas industry. In the end a handful of notorious creeps like Bernier and neo-Nazi Faith Goldy showed up, complaining that the government hadn’t shoveled the snow off Parliament Hill for them.

This time, drawing on their many months of organizing local anti-vaxx marches, their rally will be bigger, even if it falls short of the hundreds of thousands their most deluded disciples predict. Even a small step forward puts more wind in their sails, money in their coffers and boots in their gangs.

Until there is an equally big, vocal and visible movement from the left, against pandemic profiteering, against environmental destruction, in support of Indigenous land demands, and in defence of our human rights and living standards – a real movement for freedom – stunts like the “truckers convoy” remain a danger. It can’t be laughed off.

‘Prison is no joke’

US claims about Russian “aggression” are a hypocritical farce

The Farce of “Justice” in a Liberal Democracy