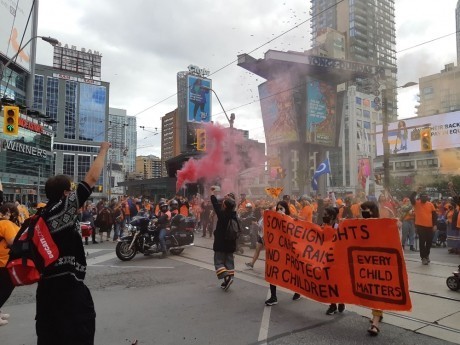 October 2, 2021 – From International Socialists
251 views
The inaugural “National Truth and Reconciliation Day” on November 30th is a product of the massive pressure from below expressing the need for a true reckoning for the legacy of the Indian Residential “School” (IRS) system. Until this year, this day has been known as Orange Shirt Day, from the colour of the favourite shirt of Phyllis Webstadthat was taken from her on her first day at IRS. She is from the Stswecem’c Xgat’tem First Nation in northern Secwpemc territory and has authored two books, the “Orange Shirt Story” and “Phyllis’s Orange Shirt”, for younger children.

Prime Minister Justin Trudeau flew on holiday to the beach in Tofino, BC, perhaps licking his wounds after losing an appeal to a court decision compensating Indigenous victims of the child welfare system to the tune of billions of dollars the previous day. The mask is slipping for the man whose political future is up in the air after the election that only he wanted failed to bring a Liberal majority. The 2015 “sunny ways” Trudeau would have been eager to stand at the forefront of such a national holiday and cry crocodile tears for the victims of IRS genocide, all the while perpetrating the ongoing genocide of Indigenous peoples throughout Canada. But now it seems he is no longer putting in the effort to keep up the charade. This shows how the rising Indigenous sovereignty movement, and the broader understanding among settlers that Canada is founded on Indigenous genocide, in part through the IRS system, has shaken those who wield the power in the Canadian state.

This lack of respect for Indigenous people and communities who’ve been traumatized by the genocidal IRS system is consistent with Trudeau’s attempts to deflect blame away from the federal government for responsibility for the IRS. There is also likely an element of a backlash against the Cancel Canada Daymovement that transformed July 1st into a sea of orange. And this backlash also consists of continued construction of pipelines over Indigenous land and arrests and violence by the RCMP against Indigenous land defenders on their own land.

On Wet’suwet’en territory, on the banks of the pristine river Wedzin Kwa, this week land defenders have occupied the CGL rig intended to drill under the river. RCMP arrested 2 land defenders this week, including 1 on November 30. Before the Unity Landback event in Dufferin Grove Park on November 30th, one of the performers, Derek Miller from Six Nations territory, had to report to police for fingerprinting for showing up in solidarity at the 1492 Landback Lane camp.

Governments, police and courts, as products of, and perpetrators of settler colonial capitalism, cannot reconcile their operations with dismantling the same colonial system.

#ShutDownCanada in February 2020 in Solidarity with Wet’suwet’en under attack was a breakthrough moment that showed that there was an active network of Indigenous land defenders in Indigenous communities across Turtle Island, and significant support that was broader than ever before amongst settler populations in so-called Canada, including from unions.

The amazing occupation of a luxury home development at 1492 Landback Lane on Haudenosaunee land garnered wide support, also significantly from the labour movement. Delegations of United Steelworkers (USW) members, including the Ontario and National leadership, have visited the site numerous times, donated money and other resources to help further the struggle and is conducting ongoing education of the rest of the membership on the need to support struggles for Indigenous sovereignty.

Earlier this year, the confirmation of Indigenous genocide when ground penetrating radar identified 215 unmarked graves of Indigenous children at the site of the former Kamloops Indian Residential “School” (subsequent searches at other sites across Turtle Island have confirmed over 6,000 graves) shook Canada to it’s settler colonial foundations.

In Indigenous communities, a mixture of grief for their lost children and anger that it took physical evidence for the matter to be taken seriously, despite a mountain of testimony from IRS survivors and critics and the TRC calls to action that dealt specifically with searching for these graves. Both these feelings are compounded by the ongoing genocide represented by the continued stealing of Indigenous children in what is called the “Millenium Scoop”, where Indigenous children are taken into foster care on the pretext of child welfare, blaming parents for the poverty that is perpetuated by the colonial system. The failure of the Liberals to provide clean water to the many reserves that have been without for years, and for some decades, the continued attacks on unceded and treaty territory for pipelines and other economic developments, the unequal treatment of Indigenous people at the hands of governments, the police, the courts, schools, the healthcare system and by employers and in many other ways, continues the genocidal project of the Canadian settler colonial capitalist state.

The confirmation of IRS genocide has shaken the beliefs of non-Indigenous Canadians in the moral foundation of Canada, 57% overall, and 70% among 18 to 34 year olds polled in June by Leger felt that their view of the country and it’s brutal history had changed. This has raised questions for many about other Canadian myths: peacekeeping “nice guys” that look out for the little guy and say sorry a lot. The reality is Canada is, and has always been an imperialist state and the fact that broader layers are making the connection is a positive sign.

The view from the ground up on November 30th was much different than from the top down. Ceremonies and actions, online and in person were held in many communities across the country. Indigenous led, with participation by many supporters, these events showed that the struggle for Indigenous rights and sovereignty continues to grow, and socialists need to continue arguing for respect for Indiengous sovereignty.

By making November 30th a holiday for federal workers, Trudeau is asserting that “Truth and Reconciliation” has already been achieved, otherwise what are we celebrating?

This is just another bold face lie.

After last February, reconciliation is dead.