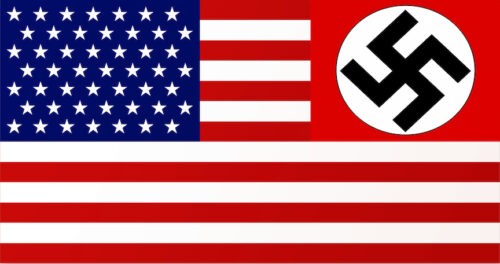 With a bold and completely self-sabotaging diplomatic blunder, one which fails on every level including the least rigorous sanity test, this past Wednesday the U.S. was one of two nations to vote against a UN resolution designed to discourage the glorification and promotion of Nazi ideology. The other nation was Ukraine, which currently is overrun and effectively ruled by Jew-hating, Russia-hating, LGBT-hating neo-Nazis, who openly flaunt their allegiance to Stepan Bandera, a collaborator with the Third Reich during WWII.

The reason the U.S. supports such Jew-hating, Russia-hating thugs is obvious. It’s an effective way to intimidate Russia and initiate a proxy war.

Let’s state this up front: U.S. support for Ukraine is not symbolic. It’s a blatant act of geopolitical aggression. While it’s certainly not out of character for the U.S. to align itself with vile regimes, playing this game in this particular arena escalates risk of major war to a new unprecedented level. Russia has over 7,000 nuclear weapons. While it has pledged no first use, it has stated openly that it will use them if their survival as a nation is threatened.

The U.S. has sent mixed signals as to whether it would support Ukraine in a war with Russia. At the same time, the U.S. and its allies have ships in the Black Sea, and are regularly skirting Russia’s borders with reconnaissance and nuclear-armed bombers. The U.S. and its NATO allies already have troops in Ukraine, supposedly training the military there to “defend” itself. There are now several NATO bases in the country. Intentionally or unintentionally, military conflict in this region by any actors could put the U.S. and Russia in direct confrontation.

The marriage of deception and hubris is the gain-of-function for recklessness. Lies are like viruses. They can’t be contained. The lies surrounding the 2014 Ukraine coup, the subsequent “invasion” of Crimea, the military aggression of Russia in the Donbas, coupled with the power-drunk delusions and self-righteousness cavalierly deemed ‘exceptionalism’, are a self-replicating storm which has overwhelmed Western media, our State Department, all of our presidents, and more dangerously Congress, which constitutionally has the responsibility for declaring war. Marco Rubio, Tom Cotton and Jim Inhofe, virulent war hawks with a lot of clout, are pushing a bill through the Senate called GUARD (Guaranteeing Ukraine’s Autonomy by Reinforcing its Defense). It proposes significantly increasing the amount of lethal weapons, employs confrontational, insulting language which slanders Russia and makes unfounded accusations about Russia’s behavior and deployment of troops within its own borders. The aid package is supposedly intended to counter Russia’s non-existent aggression against Ukraine. More weapons will only feed Ukraine’s delusion that it can take on Russia militarily. At minimum, it will give Ukraine better odds at succeeding if they decide to attack the Donbas region. This isn’t the blind leading the blind. It’s the crazies leading the crazies.

The purpose of the UN resolution (you can read it HERE for yourself) is: “Combating glorification of Nazism, neo-Nazism and other practices that contribute to fueling contemporary forms of racism, racial discrimination, xenophobia and related intolerance”.

The U.S. takes the specious and patently ridiculous position that the resolution would infringe on free speech. Well, we officially discourage female genital mutilation, black markets for human organs, and pedophilia. Supporting laws banning these and other socially unacceptable practices hasn’t interfered with discussion online, debates on TV, YouTube videos, publication in academic journals and the media on these controversial topics. Besides, on page 3 of the UN resolution itself, it explicitly states:

Stressing that the purpose of addressing hate speech is not to limit or prohibit freedom of speech, but to prevent incitement to discrimination, hostility and violence, which shall be prohibited by law …

To make the American position even more disingenuous is the campaign in the U.S. and much of the West to prevent any criticism of Israel and its cruel oppression of the Palestinians, including the passage of laws prohibiting BDS (boycott, divestment, sanctions), the coordinated effort to incentivize Israel to end the occupation of Palestine, an effort which perfectly parallels the same strategy used against the apartheid regime of South Africa in the 80s. The prohibitions around BDS and voicing legitimate challenges to Israel’s oppressive, cruel and genocidal treatment of Palestinians amount to not just suppression of free speech but silencing of dissent and a direct legal assault on noble and necessary attempts to halt grotesque criminality and abuse of power.

Such is hypocrisy, self-contradiction, and shame. But to make an omelet you have to break some eggs. To maintain an empire you have to abandon a few principles. To march to war you have to villainize the peacemakers. To destroy the world and end all life you have to abandon reason and restraint. Winning is everything, even if you lose everything. Salute the flag. Bow down to the red, white, black & blue.

John Rachel has a B. A. in Philosophy, has traveled extensively, is a songwriter, music producer, neo-Marxist, and a bipolar humanist. He has written eight novels and three political non-fiction books. His most recent polemic is The Peace Dividend: The Most Controversial Proposal in the History of the World. His political articles have appeared at many alternative media outlets. He is now somewhat rooted in a small traditional farming village in Japan near Osaka, where he proudly tends his small but promising vegetable garden. Scribo ergo sum. Read other articles by John, or visit John’s website.

A just verdict, but not true justice

From Pegasus to Blue Wolf: How Israel’s “Security” Experiment in Palestine Became Global