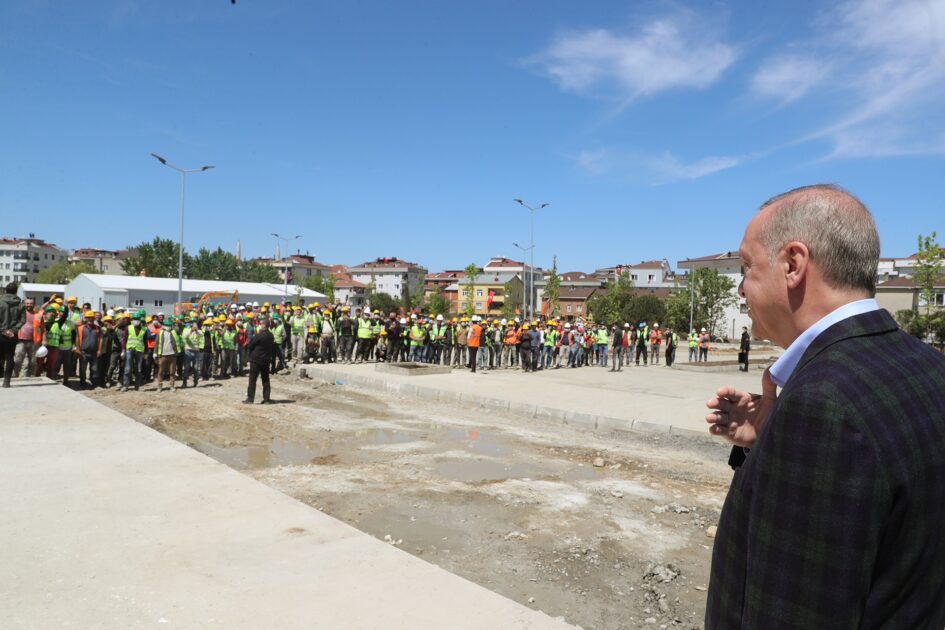 On 14 August, the ruling Justice and Development Party (AKP), led by Turkish President Recep Tayyip Erdoğan, celebrated its 20th anniversary against a background of environmental, economic and political crisis.

The wildfires that spread across Turkey in the space of a few weeks have destroyed more than 160,000 hectares of land, and killed eight people and thousands of animals. The lack of firefighting planes and other resources showed the incompetence of this government, as they prioritised profit rather than the resources needed to deal with these kinds of natural events.

Similarly, it is reported that more than 80 people have died following the floods in northern Turkey. The majority of these deaths occurred in one city called Kastamonu. Local people interviewed on the TV blamed the logs piled next to the river and the hydroelectric power plants for causing these floods. These power plants were built despite mass opposition from local communities and environmental groups. But the AKP has allowed its big business friends to exploit natural resources in pursuit of profit, at the expense of the people who live there.

Even before the wildfires and floods, which revealed the incompetence of this government, almost all of the polls showed that support for the AKP had been dwindling over the last few years. This is the case even in the areas where Erdoğan had traditionally received more than 60% of the total votes.

The class character of Erdoğan’s regime has been laid bare to working-class people during the pandemic. Although there was a ban on dismissals, thousands of people have lost their jobs, as bosses found loopholes in employment laws. During the lockdowns, millions had to go to work in unsafe working conditions or risk losing their jobs. More than two million workers were forced to take unpaid leave.

Unemployment has skyrocketed to nine million, which will only get worse with the lifting of the ban on dismissals. Furthermore, inflation levels remain very high. According to the Inflation Research group, an independent group of academics, the annual inflation rate in 2021 is around 40%, yet the official data claims that annual inflation this year is 18.95%.

On top of this, the massive influx of refugees from Syria, Iraq and Afghanistan over the last few years has stoked anti-migrant sentiments among Turkish people, as they look for someone to blame amid a sharp deterioration in living conditions. In the absence of a mass workers’ party putting forward a class position, far-right parties will exploit anti-migration sentiments to make gains.

The stabbing of two Turkish men in capital city Ankara by Syrian refugees, earlier this month, has led to a dangerous escalation of tensions, as a group of Turks attacked Syrian shops and houses in retaliation following the death of one of the stabbed men. It is the task of the left to fight for resources all working-class people need. A programme of jobs, homes and services is needed to smash racism and unite the working class.

Despite the widespread anger and all the problems that exist as a result of Erdoğan’s rule and the capitalist crisis, the opposition parties have failed to win the confidence of AKP supporters or those who have previously voted for the AKP.

The reason why the AKP government is still able to get support from a significant section of the population, even though people are looking for an alternative, is due to the weakness of the opposition and their failure to put forward any policy that can provide solutions to the problems faced by working-class people. Working-class and young people need a party of their own, a party that is armed with a fighting socialist programme.

The splinter groups from the AKP, like the party founded by former finance minister Ali Babacan, have failed to win the confidence of AKP supporters. Babacan’s policies only get an echo amongst capitalist commentators, who assume that AKP supporters might support Babacan on the basis that he was the finance minister when the Turkish economy was performing relatively well. Any policy put forward by Babacan can only appeal to businesspeople.

Despite the fact that the main opposition party, the Republican People’s Party (CHP), is widely seen as a left party by many, it is strongly tied to the capitalist system. It is opposed to any serious opposition to Erdoğan’s rule as they fear they can be sidelined by a mass movement.

But there is a substantial layer of young people who still have illusions in the CHP. They see the CHP as a vehicle for political change because of the more liberal and secular policies it puts forward. This is despite the fact that the party is shifting more to the right every passing day, as they opportunistically use religion to appeal to AKP supporters. More importantly, the CHP is the party of big business, and if they do come to power they will implement a programme of cuts and privatisation. This is illustrated by the fact that when bin workers employed by a CHP-led council went on strike earlier this year, a shameful smear campaign against the workers was initiated by the CHP.

As a product of the political turmoil of the 1990s, the AKP regime often talks about the economic and political problems present before they came to power, and how they have transformed Turkey into a ‘healthy’ country. This narrative can have a certain echo amongst the older generation who fear returning back to the 1990s.

However, young people have not seen or remember any government other than the AKP. Under Erdoğan’s rule, they feel like their democratic rights are being trampled on; have seen inequalities in education; can’t find jobs or pay their rent. Youth unemployment stands at a staggering 45 percent. This figure is much higher for young women. Many working-class youth feel like their future is slipping away through their fingers.

It is not surprising, therefore, that support for the AKP and their ally, the far-right Nationalist Movement Party (MHP), amongst youth is lower than the national average. According to a poll conducted amongst 15-21 olds, only 24 percent of them said they will vote for the AKP or MHP in the next general election, due in 2023. It is crystal clear to Turkish and Kurdish youth that the AKP regime offers young people nothing but poverty, exploitation, oppression and war.

Due to the high levels of repression, a layer of young people might be put off getting organised and fighting. But as witnessed during the Gezi Park resistance of 2013, young people are prepared to move into action once they find an outlet to express their anger. Therefore, the question is not whether there will be a struggle but when the struggle will erupt.

More recently, we saw a glimpse of how prepared young people are to fight when Boğaziçi university students organised several protests after a pro-government rector was appointed by Erdoğan. These protests were replicated on campuses across the country. After months of protest, the students and staff won a partial victory as the rector was removed from the office. This U-turn could boost the confidence of youth, as this generation has not seen many victories against this regime.

During the pandemic there has been a brutal offensive against the working class and the youth by the bosses and their political representatives. The numerous cases of trade union victimisation are an indication of how ruthless the bosses are in stopping workers from organising in their workplaces.

With the exception of a handful, the tops of the trade union movement have failed to go beyond press statements. The pro-government, right-wing union leaders, such as the leadership of the Confederation of Public Servants Trade Unions (Memur-Sen), are already making treacherous deals with the government. Trade union action is needed to fight for a decent living wage for all workers. It is an urgent task for the left in these unions to put forward an industrial and political programme to transform trade unions into democratic, combative organisations.

Workers, young people and the oppressed also need a party of their own. The pro-Kurdish left party, the People’s Democratic Party (HDP), played an important role to enthuse the oppressed Kurdish people by putting forward left policies. Despite the enormous pressure and anti-democratic measures that effectively deny Kurdish people the right to vote and the right to be elected, the HDP remains the third biggest party in the Turkish parliament.

However, due to various factors, the leadership of the party has indulged in identity politics, which is reflected in their programme and methods. Rather than succumbing to divisive ideas of identity politics, the HDP should adopt a socialist programme to cut across ethnic and sectarian divisions, and help build a new mass workers’ party to resolve the crisis in working-class political representation. But the HDP alone will not be enough to build such a party. The trade union movement, together with other left forces, needs to throw its full weight behind such a project. Even a conference called by left union leaders to discuss this strategy can have an electrifying effect on the rest of the labour movement.

The profound crisis in global capitalism – economic, political and social – will have huge ramifications in Turkey, not to mention the possibility of a refugee crisis, which will have a further destabilising effect. For how long the Erdoğan regime will be able to deal with these crises will depend on a combination of national and international factors. But it is clear that Erdoğan will do all he can to cling onto power by any means.

Building independent organisations of the working class is vital to prepare ourselves for these looming battles. This requires building militant unions and a mass workers’ party with a socialist programme. The CWI would like to take part in the debates and discussions in Turkey on how these organisations can be developed and what programme and methods are needed to fight for a socialist society run by workers.

What is happening in Turkey?