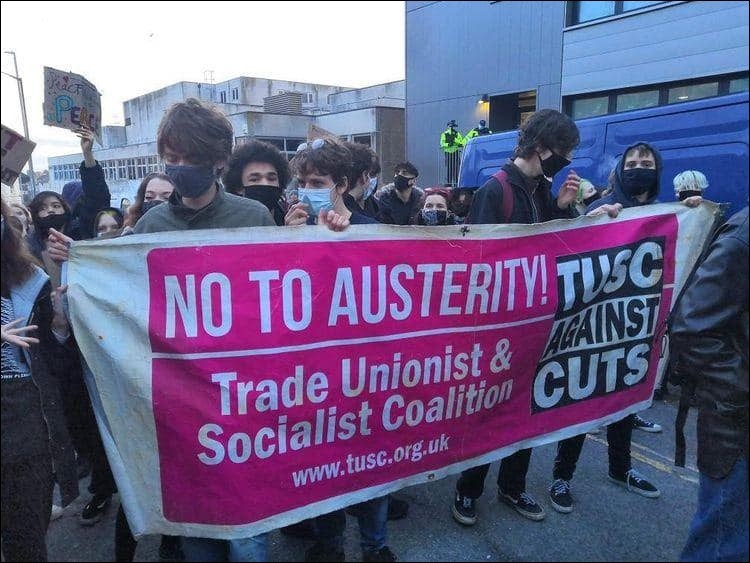 The Socialist has this week printed the following appeal from the Trade Unionist and Socialist Coalition (TUSC), of which the Socialist Party is a constituent part. Socialist Party members will be among those standing as part of the coalition in May’s elections. 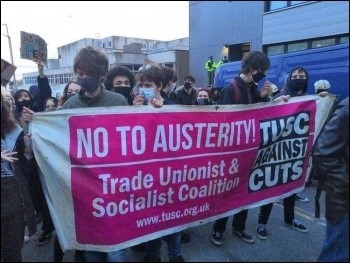 The Trade Unionist and Socialist Coalition (TUSC) has issued an appeal for the widest possible united anti-austerity socialist challenge at the local council elections scheduled for 5 May 2022.

“As every day goes by, it becomes ever clearer that the Labour Party under Sir Keir Starmer will not provide alternative anti-austerity policies to those the Johnson government is seeking to implement to make working-class people pay for the effects of the Covid crisis, through cuts in public services, wage freezes, and rising prices and taxes”.

“In the polls taking place next May, in which over 6,500 council seats are up for election, while there may be a handful of Labour candidates still defending the anti-austerity policies that Jeremy Corbyn supported, voters in the vast majority of cases will have no choice other than that between different varieties of austerity politicians – unless fighting trade unionists, socialists, and working-class community campaigners get together to offer a united, anti-austerity alternative at the ballot box”.

If Jeremy can consider standing, why can’t you?

“One thing that Starmer has been firm on, as he stated again in a BBC interview on 26 November, is that Jeremy Corbyn will not be re-admitted to the Parliamentary Labour Party and, if so, will therefore not be able to contest the next general election as a Labour Party candidate”.

“Although there has been no formal announcement from Jeremy the indication is that, as reported in The Guardian on 27 November, ‘backers now expect him to follow the example of Ken Livingstone, who stood as London mayor in 2000 despite not having been selected to run for Labour’.”

“But while Jeremy may be looking to the next general election to stand against Starmer’s Tory-lite Labour, as Ken Livingstone did against Tony Blair’s New Labour, we do not have to wait until then. The May local elections are just months away”.

“TUSC is extremely encouraged by the growing determination of many trade unionists not to let Labour councillors get away with cuts to local authority services, jobs and conditions without a challenge, including at election time”.

“The Unite union conference in October agreed that ‘Unite must now adopt a policy calling on Labour councils to set legal, balanced no-cuts needs-based budgets’ rather than meekly accept the Tories’ austerity agenda. This will now be a challenge made to every Labour councillor and candidate. And if they don’t meet it, why should they expect to be unchallenged at the ballot box, either by Unite members standing themselves or backing other anti-cuts candidates?”

“Meanwhile BFAWU, the Bakers’ Union, has disaffiliated from Labour while making clear that they are not stepping back from politics. We would warmly welcome BFAWU members, and other union members too, standing as independent trade union candidates in these elections. And we commit to ensuring that the TUSC name – or one of our legally registered descriptions like ‘Trade Unionist and Socialist Candidate’ – will be made available for them to use on the ballot paper if they wish to do so, to help distinguish them from other independents standing”.

TUSC umbrella open to all

Clive Heemskerk, the TUSC national election agent, stressed that the TUSC umbrella is open to all:

“The only qualification to candidates being able to use the TUSC name and logo on the ballot paper is that they accept the ten core policies in our local elections policy platform (see ‘Vote for a socialist recovery from the Covid crisis! TUSC core policies for May’s elections’ at tusc.org.uk).

“TUSC stands for a socialist recovery from the Covid crisis. So somebody who is unwilling to pledge that if they are elected they will go into the council chamber and vote against cuts, closures, privatisation and other austerity politics cannot be a TUSC candidate. None of the establishment parties require that from their candidates, but we do”.

“In the same way that using the TUSC name distinguishes candidates from other ‘independents’ on the ballot paper – some well-meaning but many of them ex-Tories or former UKIPers hiding their policies – so the core policy pledges show TUSC candidates’ distinguishing commitment to defending working-class people and their local public services”.

A coalition of equals

“But the core policies are a minimum commitment, not a maximum, and individuals and organisations participating within the Trade Unionist and Socialist Coalition are unequivocally able to preserve their own identities, promote the organisations they may be members of, and highlight any further policies and issues that they may also wish to campaign on”.

“TUSC is an inclusive coalition of equals with no one group able to dominate over others, operating on a consensus basis – nothing is agreed unless everyone agrees. This applies to the All-Britain steering committee which comprises the current participating organisations – the RMT transport workers’ union, the Socialist Party, and Resist – the elected TUSC Individual Members’ representative, and senior officer or national executive level individuals from the BFAWU, NAPO, NEU, POA, UCU, UNISON and Unite trade unions, sitting in a personal capacity”.

“But it also applies locally as well. So, for example, TUSC has invited the newly-formed Beacon Liverpool Party to participate in a local TUSC group with the same rights as the local branches of the organisations participating nationally, and the same offer is there for all other local or regionally based organisations wanting to take a stand”.

“The TUSC ‘umbrella’ federal approach, we believe, is well-adapted to the situation we face with Starmer’s revival of Tony Blair’s New Labour politics – to achieve the widest possible united anti-austerity socialist challenge in May”.

How you can become a TUSC candidate

Candidates who wish to appear on the ballot paper using the name and logo of a registered party have to submit to the council election staff, along with their nomination forms, a Certificate of Authorisation to use a Party Description, signed by the registered Nominating Officer of the party. TUSC has produced a form to process applications for a TUSC certificate for local council elections, which is available on the TUSC website at www.tusc.org.uk/txt/454.doc.

There is also a summary guide for candidates and election agents looking to contest the local council elections available as a downloadable PDF at www.tusc.org.uk/txt/455.pdf, which prospective candidates and agents are encouraged to read before submitting an application form.

Anti-socialist protest in Cuba fizzles out

Britain: back to ‘business as usual’ – is austerity over?

Austerity isn’t over – Prepare for struggle

Austerity and its link to ‘social murder’