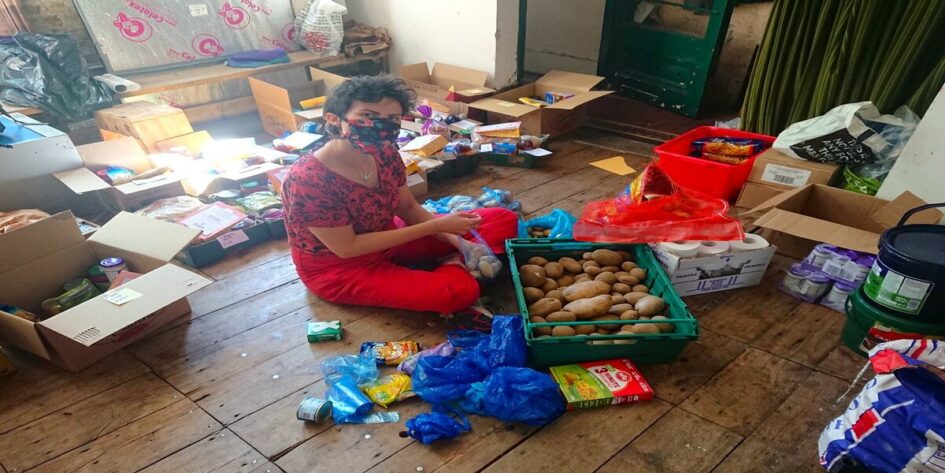 As Covid-19 hit the UK and we entered the apocalyptic scene- scape of bare supermarket shelves and boarded-up pubs, it was hard not to recognise that our economic system for organising society had failed. While it’s important to underline the continuity between the issues we have faced pre- and post-Covid-19, it’s equally important to recognise and re-orientate ourselves to the new practices that capital is adopting. The pandemic has highlighted and exacerbated the insecurities and precarity already presented in the UK economy, and these have played out on individual and structural levels.

At the level of the individual, it is the most vulnerable who have had the rug pulled from under them: migrants with ‘no recourse to public funds’ status (NRPF) living in insecure housing; young zero-hours hospitality workers living from pay cheque to pay cheque; outsourced migrant workers treated as disposable at the best of times; and many more. While the furlough scheme papered over some of the cracks, for some workers even that was withheld by bosses. Many of us have discovered that there is either no safety net below us, or that the gaps in it are so big there’s every chance we’ll fall through. For groups organising on the frontlines of this crisis, stepping up in extraordinary ways was a necessity, with mutual aid and community support groups trying to catch those who fell through the net. On a structural level, the shocking inability of our economic system to redirect industry towards offsetting the worst excesses of the pandemic has revealed the true price of withdrawing even the minor elements of democratic participation in the post-war national economy. The total failure to plan or coordinate a robust response revealed the weakness of ‘just-in-time’ supply chains. For all the back-slapping triumphalism of our free-market economy, our food supply floundered while workers were sent into unsafe workplaces with no personal protective equipment. The role of labour in the capitalist system as simply sites of value creation or extraction has been laid bare, with essential workers allowed to avoid isolation in order to work – but not to socialise – and renters abandoned to the only temporarily deferred payment of full-cost rents. Over the past 18 months, our education system has been stretched at every evel, health care workers treated to a real-terms pay cut and zero-hours and outsourced workers treated as totally expendable.

Where is the response?

While the fury at the Covid-19 death toll of around 130,000 should rightly fall on the Conservative government and its death-cult capitalism that subordinates human life to the pursuit of profit, we have to question where our opposition has been. The Labour Party’s decision to support the government ‘in the national interest’ has cost lives.

For the UK workers’ movement, the pandemic has come at an incredibly difficult time, when we are at one of the lowest ebbs in our history. The proportion of unionised workers has been halved since the 1980s – an alarming statistic that doesn’t just tell us that there’s half as many union members in workplaces but that many workplaces are not unionised at all. This is particularly the case in the private sector. Office of National Statistics data tell us that the divide between trade union membership in the public and private sectors is stark: only 13.3 per cent of private sector employees belong to a trade union, compared to 52.3 per cent of public sector employees.

The post-lockdown moment demands that we begin seriously to think strategically about where we go from here in addressing these issues, both within and beyond traditional union spaces. TWT this year will be programming sessions that look to tackle that very question, asking: how does organising, in our communities and workplaces, fit into ‘rank-and-file’ strategising? What does strategic campaigning look like? What can we learn from the ‘glimpses behind the curtain’ of capital the pandemic has given us, and how can we incorporate it into strategy?

There are many groups that have been organising during the pandemic that we can learn from. The organised renters and community groups such as the London Renters Union and Cooperation Town, which successfully resisted evictions. The nurses who risked their lives during the pandemic now mobilising against a pitiful one per cent pay raise. The food logistics workers and hauliers who, understanding their value and prepared to demand more, have been organising wildcat strikes nationwide.

Key to answering these questions and pushing back against inequality is understanding how the working class in this country is (and might be) composed. This means doing the work to understand how the economy operates, not just from the macro perspective of policy, but from the everyday experiences of workers and communities.

Capitalism is riddled with contradictions and presents us with new points of attack when it adapts to a shifting context. By organising collectively, mapping together the labour processes across the economy, deciphering the disciplinary tactics wielded by management and extractive capital, and learning from the strategies of resistance employed by workers and communities, we begin to see new forms of embryonic solidarity, or what academic Maurizio Atzeni has described as ‘solidarity not yet activated’.

We can activate that solidarity through collective action and struggle led by workers and communities. This means starting our organising from the concrete everyday injustices of work and social reproduction under capitalism, rather than beginning in the abstract.

Our job is to look inside the black box of how capital organises the economy, to see the contradictions and cracks and to exploit them. As Leonard Cohen wrote: ‘There is a crack, a crack in everything – that’s how the light gets in.’

#TWT21: Socialists and the Labour Party