U of MN students speak out for striking educators 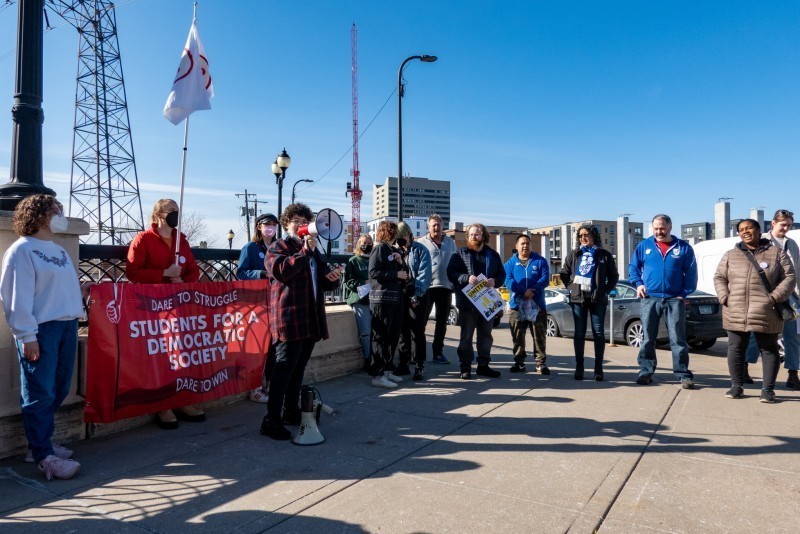 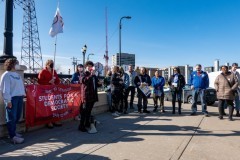 U of MN students stand with striking educators.
(Brad Sigal)

Minneapolis, MN – Around 40 people gathered in Dinkytown, off the intersection of 15th Avenue and 4th Street to hold a speak-out in support of striking Minneapolis educators on Saturday, March 19. The action kicked off with a round of chants, as onlookers passed by, some even joining the protest, and cars honked their horns in support, and speakers made their way to the mic.

Students for a Democratic Society (SDS) member and former Minneapolis Public Schools student, Gillian Rath, said, “being a schoolteacher is one of the most demanding jobs I can think of.”

Rath continued, “I had teachers who would pay for school materials out-of-pocket and talk with me when I needed advice. That’s not uncommon for teachers to do. I’m sure everyone here can think of one teacher they had that did things like that for them.” She ended her speech by demanding, “so why doesn’t the district provide teachers with the necessary wages and resources?”

Ana Vasquez, an educator and the Second Vice-President of the Minneapolis Federation of Teachers Local 59’s teacher chapter, and Loretta Van Pelt, a rank-and-file member of MFT and organizer with Twin Cities Coalition for Justice for Jamar, both detailed what educators were striking for, showing that it’s not just a fight against cuts in the moment, but a fight against a long ongoing attack on public education and on the working class.

Vasquez led the demonstrators in reading aloud MFT’s demands for Safe and Stable Schools, including a living wage and professional time for educational support professionals, recruitment and retention of educators of color, smaller class sizes and more mental health supports for students, and competitive pay to retain licensed educators.

Olivia Crull, a member of SDS and the Freedom Road Socialist Organization made clear to students, “We have to hold the line with [MFT], so that they can win everything that educators and students in this city deserve.” Crull continued, “Now I love the word solidarity, but I want to challenge us all to go beyond that. Students shouldn’t just be in solidarity with workers, we should see their fight as our fight. We should see ourselves as the future working class.”

Closing out the action, David Gilbert-Pederson, an organizer with AFSCME 3800 and Minnesota Workers United, and who is currently on release to MFT 59 to lead up their strike solidarity work, detailed how much the educators he had did for him, and how important it is to stand with them in this moment. Gilbert-Pederson also made the connection of how MFT is leading a fight for the whole working class.

Solidarity with striking lecturers is the only way students win