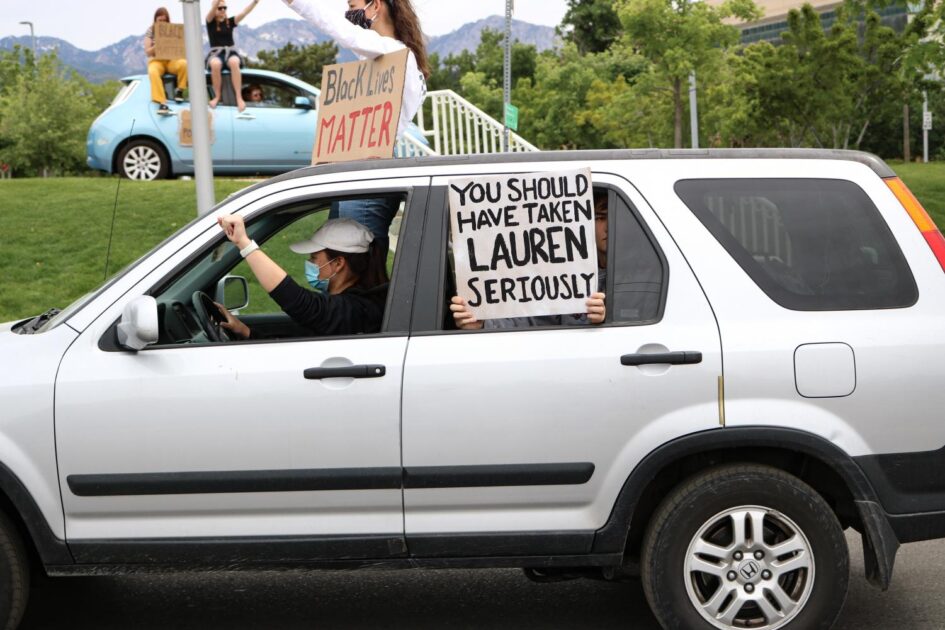 A series of racist hate crimes over the past few months has spurred anger and organizing among students on the University of Utah campus. Students at the University of Utah plan on holding a demonstration to demand administrative accountability, campus police defunding, and reallocation of funds for student needs on Jan. 7.

The fall semester at U of U saw multiple high-profile racist attacks and crimes, but students see the last four years as a period of increasing threats to safety. These students mark the assault and murder of Lauren Mcklusky in 2018 as the beginning of the most recent rise in hate crimes.

Mcklusky was assaulted and murdered by an ex-boyfriend and found in the back seat of a vehicle. It was later found that Lauren had tried to contact the U of U police multiple times and had made numerous reports of being followed and threatened to both U of U police and the Salt Lake City PD with minimal response.

In December the university began investigating two reported racial hate crimes that occurred on campus during the fall 2021 semester. School officials claim they were alerted by a student’s Instagram post that stated: “University of Utah Students walked through residence halls in KKK uniforms & smeared poop on a black student’s door. Why hasn’t anyone done anything??”

On Sept. 1, a Black student living in the U of U residence halls found a paper towel on their door handle with “a brown substance in it,” and more of the substance, which appeared to be fecal matter, smeared all over the door of the Black student’s dorm room.

On Oct. 2, in the same residence hall, a resident advisor reported people in “white, KKK-like attire.”

The University Racial and Bias Team, which reports “incidents and updates” on the campus has also recently reported three additional recent hate crimes:

On Sept. 7, “three unknown individuals joined the Muslim Student Association Discord channel and began using racist language and sharing racist memes and images in an attempt to ‘troll’ the channel and its members,” according to the Racial and Bias Team.

On Nov. 23, “a university contractor was making a delivery when two students shouted the N-word and threw sunflower seeds and coffee pods at the individual.” According to the University, this report is in the “monitoring” stage, meaning the team is “working with appropriate departments to monitor and prevent future reoccurrence.”

On Dec. 10, “a car parked in the Chapel Glen parking lot was found with a racial slur and bullying language written in the dust on the windows of the car.” This incident is “in review.”

U of U students call for more safety, organizing

The recurring racial attacks and hate crimes on campus have raised concerns among student activists at the University of Utah that there is an organized far-right wing force on campus putting Black, Brown, LGBTQ, women and other students in immediate danger.

Devin Martinez, an organizer on campus with the ANSWER Coalition — Act Now to Stop War and End Racism, told Liberation News, “The University allowed these incidents to happen with no repercussions for those responsible, practically sending the message, especially to nationally oppressed students, that you’re on your own — the U will not keep you safe.”

Martinez continued, “The rising number of these harsh attacks on our campus leads those of us involved on campus to believe that there is a significant far-right wing presence on campus targeting these nationally oppressed students. It’s pushing many students to think about how they should respond to these failures by the University, collectively.”

Liberation News also spoke with Ermiya Fanaeian, Chairwoman of Armed Queers Salt Lake City, organizer with the World Prosperity Organization and a well-known student activist at the University of Utah involved in multiple movements on campus. She addressed herself to school official claims to be doing “so much work for less fortunate/oppressed students.”

Fanaeian said, “The reality is that such claims from our university’s faculty and deans don’t actually go beyond some self-flattery. The institution, and certainly the faculty and deans, haven’t made a tangible commitment to change the material reality of working-class and oppressed students.

“Student housing is beyond inaccessible to this day, to this day police are funded more than ever, while resources for women fleeing violence are nearly non-existent.

“The mass amount of funding that the institution receives could end the obstacles in the way of our education; it could have created systems that would have prevented the racist attacks on campus, but their dedication is to profit. And why would those who profit truly put any ‘work’ into challenging it?

“The University of Utah has shown they are not willing to adequately address the harm being done to its students on a real, material level. White supremacy and patriarchal violence are persistent on campus, allowed to fester, and are not addressed.”

Appleton, WI: SDS rallies for $15 an hour for students on campus

Cops on campus are a threat to students of colour