U.S. policies drove people from Haiti, now force them back 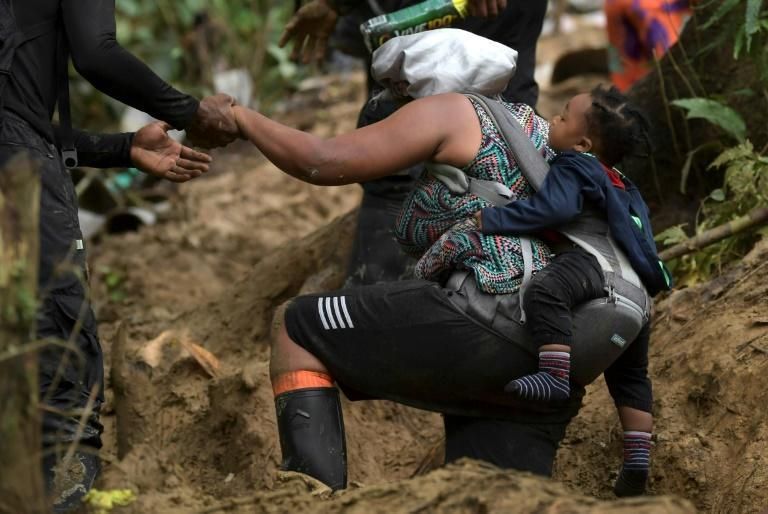 Haitians expelled from the camp in Del Rio, Texas, at the end of September were forced or tricked into getting on planes by U.S. authorities. Sometimes the Haitians were told they were going to Miami or California, when the plane was really going to the major Haitian cities, Port-au-Prince or Cap Haitien. A woman and child with a group of Haitian refugees seek to reach the U.S. by an overland route through the Darien Gap in Colombia in September.

Haitian authorities dragged them off the plane in Haiti, their luggage dumped on the tarmac. Some parents told U.S. reporters that although they finally got their bags back, their children’s birth certificates from Chile, Brazil or other Latin American countries had been removed.

Most of the Haitians in the Del Rio camps had lived and worked in various Latin American countries for years. Their children are not Haitian citizens. As many as 192,000 Haitians with Chilean visas had been working on various projects in Chile; tens of thousands of Haitians had been working on building infrastructure for the 2014 World Cup and the 2016 Olympics in Brazil.

After COVID hit in 2020, work dried up in Latin America, and Haitians lost their visas along with their jobs.

According to some reports on Twitter, since the middle of September, there have been at least 43 flights to Haiti from the U.S. Most went to Port-au-Prince, but five or six went to Cap Haïtien. Between 5,500 and 6,500 Haitians were expelled from the U.S. on these flights.

The Department of Homeland Security has extended the Temporary Protective Status for Haitians in the U.S. for another 18 months, because of the “dire situation in Haiti.” Nevertheless, Secretary of Homeland Security Alejandro Mayorkas said, “We felt it possible to return people to Haiti,” by getting USAID and NGOs to provide assistance. Mayorkas has repeatedly said that no Haitian should attempt to get into the U.S. illegally.

Assistance promised has never arrived. Some forcibly returned families lost their luggage, along with documents like passports and birth certificates. Others had no family in Haiti to stay with, or that family was unreachable since there was no public transportation to where they lived.

One reporter interviewed a man who said he had to walk from the airport to Carrefour, a trip that is two hours by automobile.

More attempts will be made

Haiti is the most oppressed and exploited nation in the Western Hemisphere, with workers paid the lowest wages. The United States has forced Haiti to open its market to subsidized U.S. rice since the 1980s and forced Haiti to keep its minimum wage to less than $3 a day.

U.S. intervention in Haiti has been going on since President George Washington told Secretary of State Thomas Jefferson to send $750,000 to the French colonialist enslavers, who were trying to repress the uprising of the African people that they had enslaved. That was the first foreign aid the U.S. ever gave. More recently Secretary of State Hillary Clinton put Michel Martelly in as president.

Destroying Haiti’s economy and politics inexorably pushes Haitians out of Haiti towards the U.S.

Colombia’s government is well aware that tens of thousands of Haitians are in Colombia without visas and are preparing to move north to attempt to enter the U.S. across the Mexican border. Arresting them would cost money.

Over 19,000 Haitians are in Colombia’s northern town of Necoclí, waiting for a boat to take them to Panama so they can walk across the Daríen Gap, which is a jungle wilderness without roads.

The paths through the Gap, according to pictures of the Haitians trekking through it, are narrow, muddy and rocky, with standing water, hot and humid, and with many poisonous snakes. People have to carry their children and luggage. Those who collapse on the trail are often left behind. Many die.

Conditions are so bad in Haiti that many people choose to cross the Daríen Gap rather than return to their homeland.

Nothing prevents the Biden administration from reversing Donald Trump’s policy of excluding Haitians. The administration could adopt new asylum regulations. In the past, presidents have adopted Deferred Enforced Departure (DED) to allow selected groups to stay for a definite period of time.

It is going to take more than threats to keep Haitians from attempting to improve their lives and the lives of their children.