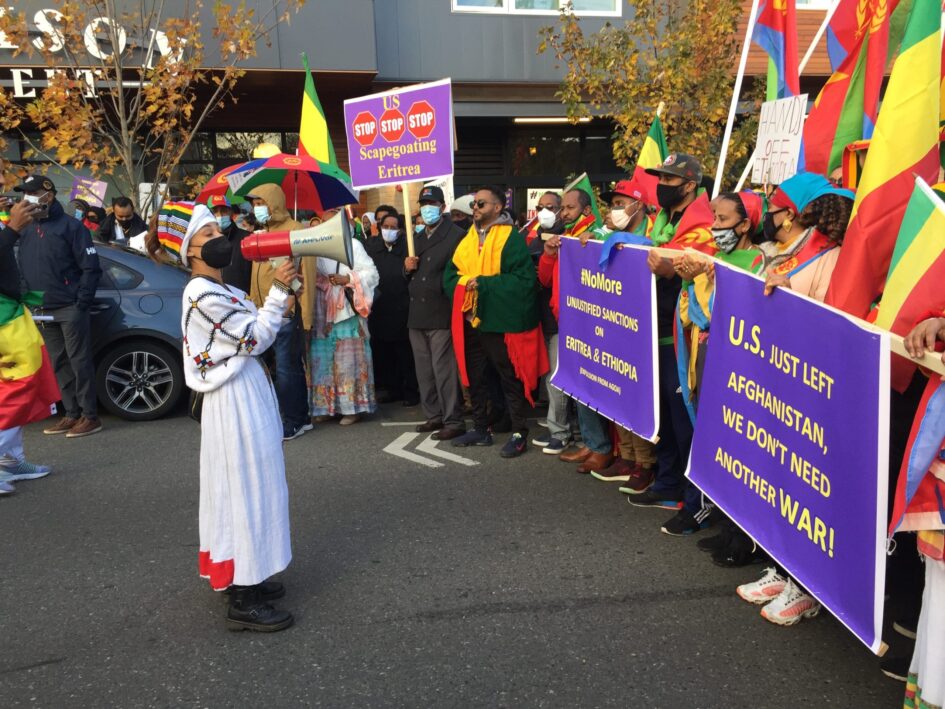 Photo: Nov. 21 demonstration in Seattle against U.S. intervention against Ethiopia and Eritrea

The Senate Foreign Relations Committee has overwhelmingly approved a new measure designed to impose sanctions on Ethiopia. Known as the Ethiopia Peace and Stabilization Act of 2022, the bill authorizes the U.S. government to suspend financial and security assistance to Ethiopia and to sanction individuals the United States decrees to be responsible for the ongoing conflict in the country. While it has not yet been signed into law, the legislation has already been met with condemnation by the global Ethiopian and Eritrean diasporas.

The bill is the latest in a series of acts by the U.S. government intended to destabilize the Ethiopian government. It follows an initial round of sanctions in September of 2021 as well as Ethiopia’s suspension from the African Growth and Opportunity Act, which provides favorable terms for trade with the United States. Critics of the bill rightfully note the act reflects the U.S. government’s one-sided support for the Tigrayan People’s Liberation Front (TPLF) insurgency against the elected Ethiopian government.

Ignoring all relevant political and historical context, the corporate media in the west presents the conflict in Ethiopia as a case of an ethnic minority group being targeted in a genocidal war. But the TPLF held dictatorial power for nearly three decades, brutally crushing dissent while it monopolized control of key state institutions, including the military. About 6 percent of Ethiopia’s population is Tigrayan, and there are Tigrayans who oppose the politics of the TPLF. Not long after the TPLF was outmaneuvered by current Prime Minister Abiy Ahmed in 2018, the TPLF launched an insurrection to regain its power. Abiy Ahmed’s government pursued a policy of ethnic unity within Ethiopia, and a foreign policy that prioritized peace and cooperation in the Horn of Africa region.

The U.S. government has been sympathetic to the insurrection due to its close relationship with the TPLF regime when it was in power and its desire to see the peoples of the region remain divided against each other. TPLF leader Meles Zenawi, for instance, spearheaded a U.S.-backed invasion of Somalia in 2006. In contrast, the current government concluded a historic peace agreement in the first year of his term with Eritrea, Ethiopia’s neighbor to the north, and has moved to improve relations with Somalia.

The new bill’s provisions are yet another attempt to undermine the sitting government. The U.S. government has no sincere interest in protecting Ethiopian civilians — in fact, the United States ignored decades of human rights abuses in Ethiopia under the TPLF regime. U.S. imperialism is merely scrambling to regain its control and influence in a strategically important part of the world.

Protestors around the world have called for the United States to back off and respect the self-determination of Ethiopia, Eritrea and all countries in the region. Yet the U.S. government has repeatedly given itself the authority to determine the existence and extent of war crimes or genocide in Ethiopia and then sanction individuals accordingly. But provisions of the new bill — such as the requirement that the United States oppose any loan from the World Bank or IMF to Ethiopia and its ally Eritrea — show that their true aim is the destabilization and delegitimization of any government that does not follow its dictates.

Sanctions will only worsen the situation. U.S. intervention of any type has never improved the humanitarian situation in a targeted country. But the movement continues to demand U.S. hands off Ethiopia and Eritrea!

Taliban faces US destabilization from within

Eritrea: how did we get here?

“Honest mistakes”: How the US and Israel justify the targeting and killing of civilians