The Conservative government is preparing to deploy the armed forces to smash upcoming strikes this month by hundreds of thousands of workers, including a 48-hour nurses walkout. Plans are also being forwarded to impose new anti-strike legislation aimed at making industrial action largely ineffective.

Up to 100,000 members of the Royal College of Nursing (RCN) are to strike in England, Wales and Northern Ireland on December 15 and 20. The nurses are fighting years long-government pay restraint and support a pay rise of 5 percent above RPI inflation—around 20 precent.

Postal workers in the Communication Workers Union (CWU) are continuing a series of national strikes, with last week’s walkout of 115,000 workers to be followed by stoppages on December 9, 11, 14, 15, 23 and 24.

To justify repression against workers fighting low pay, the destruction of their conditions and threat of thousands of job losses, the government once again denounced them as stooges of Russian President Vladimir Putin. Conservative Party Chairman Nadhim Zahawi told Sky News’ Sophy Ridge on Sunday, 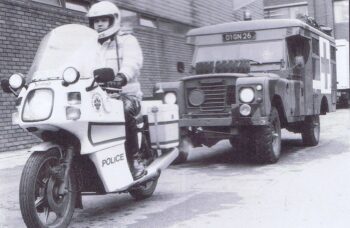 Zahawi warned that, “It’s the right and responsible thing to do, to have contingency plans in place… We’re looking at the military, we’re looking at a specialist response force… surge capacity.” Troops could be “driving ambulances” and working on UK borders during strikes.

At the end of November, 80,000 ambulance technicians, paramedics and 999 call handlers in England voted for industrial action to be held in January over pay and staffing. It would be the first by ambulance staff in 30 years. During the 1989-1990 national strike by ambulance workers the Thatcher Tory government mobilised the armed forces in an attempt to break it.

Sky News reported, “Cabinet Office said around 2,000 military personnel and civil servants are being trained to support a range of services—including Border Force at airports and ports—in the event of strike action.

They include up to 600 armed forces personnel and 700 staff from the government’s specialist surge and rapid response team, as well as other parts of the civil service.

‘Decisions are yet to be taken on deploying troops to these tasks but they are part of the range of options available should strike action in these areas go ahead as planned.

Cabinet ministers in departments most affected by strike threats, including the Home Office, Transport, Health and Education, gathered this week for a series of Cobra meetings [dealing with national emergencies or major disruption] to coordinate their response.

Other plans being considered for use against the nurses strikes are bound with the government’s privatisation agenda in the National Health Service. The Sunday Telegraph reported, “Chemists could be allowed to diagnose patients with minor conditions and prescribe antibiotics for the first time to try to reduce demand for GP appointments and cut record backlogs.” It added,

The government is moving, at the insistence of a rabid right-wing media to legally impose Minimum Service Levels [MSL] during strikes. The Sun and Times, both owned by Rupert Murdoch, demanded the government legislate with no more delay. On Friday, the Sun revealed that Prime Minister Rishi Sunak “is considering new emergency powers to break a winter of strikes”. The government planned to “rush through an anti-strikes Bill,“ that would open a new front in the Government’s war with health, rail and postal unions among others.” The “package may include using agency workers to fill strikers’ crucial roles and making it easier for bosses to replace strikers permanently.” The legislation “would add to legislation currently going through Parliament to ensure a minimum level of service on strike days in key industries, such as rail.”

The Times in a leader comment declared that if Sunak “is to have any chance of reversing the slide in his party’s fortunes, he must find ways to prevent a wave of planned walkouts from paralysing the country.” It said, “Sunak’s decision to press ahead with legislation to require the unions to guarantee minimum service levels during strikes is encouraging.” It would “oblige trade unions and rail operators to ensure that at least 20 percent of trains run during strikes, thereby ensuring sufficient services for people to get to work and school.” Passing the MSL legislation was “a test” that “Sunak, and the Tories, cannot afford to fail.”

Nor should the government be deflected by apparent public sympathy for some of the strikers. That is bound to shift as the impact of industrial action starts to disrupt people’s lives.

Opposing this view in its main editorial Sunday, the Telegraph warned,

The obvious strategy is for ministers to wait and hope that the public will turn its ire on strikers, especially given that many of the workers planning industrial action have comparatively generous pay and pension arrangements.

But that is highly risky. Polls show that voters currently back the strikers. Nurses are hugely popular. Inflation is eroding the real value of wages across the economy. There is every chance that public fury will fall on Rishi Sunak’s administration.

In seeking to suppress strikes, the government relies politically on the trade union bureaucracy. In an interview with the Telegraph, Communication Workers’ Union General Secretary Dave Ward said of the many groups of workers involved in or being balloted for action,

It’s almost like a de facto general strike taking place by the amount of disputes.

But Ward spoke as someone moving heaven and earth to prevent such a development. This week his union sold-out a month’s long national strike of 40,000 BT workers, resulting in an eruption of anger by CWU members.

Ward told the Telegraph that not only that strikes could be ended by Royal Mail, it could partner with the CWU to establish a competitive edge over its rivals. The Telegraph reported,

Ward rejected claims of inflexibility: ‘We’ve said we will deliver 24/7. We’ve agreed to that.’

What I’m saying to you is, we agreed to explore in a deeper way, how we could develop the infrastructure and Royal Mail and how we develop new products and services.

If Amazon were in control of Royal Mail’s infrastructure, I guarantee you now they would be leveraging that as a competitive advantage.

The agenda of the public sector union bureaucrats is no different. Royal College of Nursing General Secretary Pat Cullen stated that threatened strikes could be shelved based on a well below inflation pay deal, citing the example of the deal struck in Scotland with the Scottish National Party government.

This must be a lesson to ministers elsewhere that negotiations can avert action, and pay offers are put out to members for a vote.

RCN and Unison suggested to the Observer that if a deal similar to that offered in Scotland—between 5% and 11% depending on staff grades—were put forward, this could be a basis for progress.

Christina McAnea, general secretary of the largest public sector union Unison told the newspaper, “It’s in the gift of the government to stop strikes across the NHS this winter.” The health secretary “should learn from the way ministers in Holyrood averted strikes with talks and more pay.”

Exacerbation of tensions between the great powers and instability of alliances

Bhima Koregaon and the “Powers of the Other Shore”

On the escalation between Euro-Atlantic powers and Russia