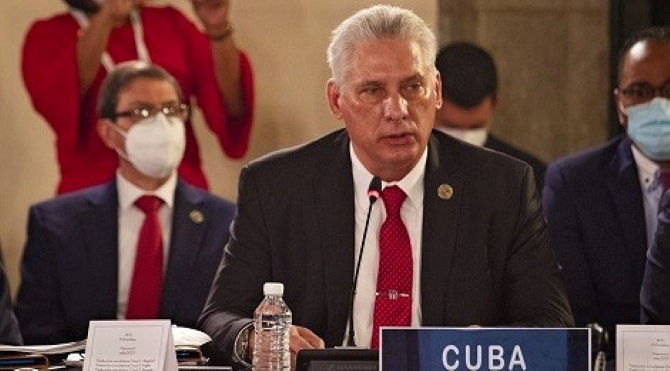 The twenty-fourth edition of our weekly review of international left and labour news with stories from Russia, Cuba, Tunisia, Ukraine, Turkey and elsewhere. There are also updates related to the speeches at the UN General Assembly and the events of the CELAC Summit. The bargaining committee at Mid-Island Co-op, made up of activists Stefanie Droog and Karen Becia, performed an outstanding job in negotiations and worked tirelessly to ensure that members received the improvements and raises they deserve.

Workers at Leoni, one of Tunisia’s largest employers, will receive a retroactive wage increase of six per cent for 2020 and an 8.5 per cent increase for 2021. Unions in the country say the increase is the result of a mature and healthy social dialogue.

Celac reiterated its rejection of the US unilateral coercive measures (+ Statement)

The Community of Latin American and Caribbean States (CELAC) reiterated its rejection of the unilateral coercive measures imposed by the United States government, in the Declaration document of the VI Summit of Heads of State and Government, held this Saturday 18 of September in Mexico.

A strike that started last month in Portland, Oregon and spread to other Nabisco bakeries and distribution centers across the United States ended Saturday after unionized workers voted “overwhelmingly” in favor of a new collective bargaining agreement.

Though some Portland employees opposed ratifying the four-year contract, calling for better terms, it ultimately garnered the necessary support from workers there and at facilities in Aurora, Colorado; Richmond, Virginia; Chicago, Illinois; and Norcross, Georgia.

Russia’s Communist Party will not recognize electronic voting results which reversed its candidates’ strong leads in the country’s parliamentary elections held over the weekend, a party official said Monday.

“China will continue to provide support to Latin American and Caribbean countries to the best of its capability, and help the regional countries overcome the pandemic at an early date and resume economic and social development”

Party leaders said they will not recognize the remote voting results and some senior members called for supporters to gather in Moscow’s central Pushkin Square.

Sir Keir Starmer looks set for a battle with Labour’s left-wing over plans to reform the way the party’s leader is elected.

Under the proposal, the one member, one vote (OMOV) system would be replaced with a return to the electoral college made up of the unions and affiliate organisations, MPs and party members.

Sir Keir has briefed the shadow cabinet on his plans and will set them out to trade union leaders on Wednesday ahead of the Labour conference which starts on Saturday.

According to the files, ASIS set up a surveillance unit in Santiago, Chile, as part of the wider CIA campaign to discredit the Salvador Allende government. It’s estimated that, from 1970 to 1973, the United States poured $8 million into the smear campaign, funding the far-right El Mercurio newspaper to create a campaign of disinformation and fan preexisting social tensions in Chile.

Further details on the role of ASIS in Chile during the Allende administration are not yet forthcoming, thanks to the secretive nature of the operation and the government’s resistance to releasing this information, even forty-eight years after foreign powers helped install the Pinochet regime.

THE Communist Party of Swaziland (CPS) called for the establishment of people’s defence militia today after the country’s armed forces stormed a college campus and attacked striking students.

It said the attack, which left many requiring hospital treatment, was part of the regime’s “desperate attempt to cling to power.”

Soldiers entered the grounds of William Pitcher College in Manzini on Sunday, firing tea gas into students’ rooms and launching violent assaults that left many with broken limbs.

One of Thailand’s most prominent union leaders is facing three years in prison for his role in organising a railway safety campaign, in a case described as the biggest attack on organised labour in the country in decades.

Rights advocates say the case involving Sawit Kaewvarn, president of the State Railway Union of Thailand, will have a chilling effect on unions and threatens to further weaken workers’ rights in the country.

On September 21, Tuesday, hundreds of workers demonstrated at Place Saint-Lambert in Liège, Belgium, to express solidarity with the 17 trade unionists convicted by the Liège criminal court last year for obstructing traffic during a strike in 2015. The demonstrators stated that to strike is a right and the criminalization of social action will adversely affect fundamental freedoms and harm democracy. Trade unions like the General Labor Federation of Belgium (FGTB/ABVV), and the Workers Party of Belgium (PTB/PVDA) and Communist Party of Belgium (PCB/CPB), participated in the mobilization on Tuesday when the Liège court was considering the appeal of the prosecuted trade unionists.

Among the proposed draft laws is draft law № 5371, which excludes workers of small and medium-sized companies from legal protection by setting a new “contractual regime for regulating labour relations”, where all working conditions are determined by an employment contract instead of by labour law.

Dismissals would be at the employer’s discretion, as the employment contract would determine the grounds for dismissal instead of the current strict list of grounds provided by the labour code.

Venezuelan President Nicolás Maduro called for the United States to lift its “criminal” blockade of Cuba and Venezuela in his address to the United Nations (UN) General Assembly.

Via a pre-recorded speech aired at the General Assembly Hall in New York on Wednesday, Maduro condemned the “fierce campaign” against Venezuela by the “elites that govern the United States.” He also expressed support for Cuba in its struggle against the US blockade.

The President of Cuba, Miguel Díaz-Canel, described defamatory comments by U.S. President Joe Biden during his speech to the United Nations as “unacceptable.”

The full text of the Cuban President’s tour-de-force speech to the United Nations, September 23, that touches on global inequality, wasteful military spending, climate change, the US blockade of Cuba, the Cuban medical brigades, international solidarity and the need for a new global economic order.

In just a week, two more workers have been killed and three have been injured due to the deplorable lack of safety in Chittagong’s shipbreaking yards. IndustriALL affiliates BMF and BMCGTWF have repeatedly brought up the issue of health and safety with both Bangladesh’s government and the ship owners, but to no avail.

The safety crisis at Bangladesh’s shipbreaking yards continue. The fatal accidents that have taken place during a week in September shows the terrifying results of not addressing dangerous working conditions.

The Communist Party USA is adding its voice to the widespread denunciation of the U.S. Border Patrol’s violent attacks on Haitian refugees at the border and the Biden administration’s mass deportations.

In a statement released Wednesday, the party slammed the “notoriously pro-Trump border control cops” who were photographed on horseback last weekend brandishing whips against Haitians seeking asylum in the U.S. The Communists’ statement is one among many from labor and civil rights leaders that also hammers Biden’s government for enforcing immigration policy left over from the Trump White House.

On September 23, Panamanian road transportation workers began an indefinite national strike against transnational shipping corporations, Maersk Line and Mediterranean Shipping Company (MSC), which seek to monopolize the logistics industry in the country. As a measure of protest, the workers blocked access to the Balboa and Colón Free Trade Zone ports. The strike was called for by the National Coordination of Containerized Cargo Transportation (CNTCC).

On Thursday, September 23, students of William Pitcher college in the city of Manzini, the economic hub of Swaziland, marched to the Ministry of Labor and Social Welfare in capital Mbabane and delivered a petition. The students have been on strike and have boycotted the exams this week. Planning is underway to organize further agitations next week.

When Salcomp Turkey, who produces smart phones for Chinese Xiaomi, the second largest smartphone maker in the world, fired 170 workers for joining a union, the union members took action. After six days, Salcomp agreed to reinstate all dismissed workers.

“More than 85% of our Food Basics members are in part-time positions, making barely above the minimum wage with no paid sick days,” said Gord Currie, President of Unifor Local 414. “Despite the fact that these workers remained on the frontline throughout the pandemic, now Food Basics wants to eliminate the highest paid full-time jobs in these stores and offer the rest substandard wages.”

Xi Jinping pointed out that China and Vietnam are socialist neighboring countries connected by shared mountains and rivers, and constitute a strategic community with a shared future. Under the complicated circumstances of overlapping changes and a global pandemic both unseen in a century, the two sides have many common interests and concerns. We must advance along the right track, enhance solidarity and cooperation, further promote socialist causes, effectively safeguard the fundamental interests of the two parties, two countries and two peoples, and make positive contributions to regional and global peace and development.

During their speeches at the 76th Session of the United Nations General Assembly (UNGA) on Thursday, African Presidents emphasized the need for the world to unite in the fight against the COVID-19 pandemic and social inequalities.

BioCubaFarma, the conglomerate of Cuban public enterprises in the biotechnological and pharmaceutical area, sent this Friday to Vietnam the first batch of Abdala anti-viral vaccines, designed by the Center for Genetic Engineering and Biotechnology (CIGB) in Havana.

“Next week, we will go back to the bargaining table,” said UFCW Local 401 President Thomas Hesse. “We hope that the Company is ready to listen to their employees.”

The strike vote saw a strong turnout from Superstore union members across the province.

Russia’s Com­munist Party on Saturday led a well-attended protest in central Moscow over what they called “colossal” fraud in parliamentary polls as police detained a number of activists.

It was the first sizable Moscow protest since this month’s controversial polls, and police did not break up the unsanctioned rally but played loud music in an effort to drown out the protesters.

Belgium’s Socialist Party (PS) leader, Paul Magnette, has called for public transport to be made totally free as one way of tackling the climate crisis which, he said, required “shock measures”.

What is needed is “totally free public transport, including for the SNCB [national railway company],” Magnette said in Le Soir newspaper on Saturday. “That’s the next step.”

Sucre Lantic workers voted 98 per cent in favour on Saturday for an indefinite general strike mandate at a general assembly held in Montreal.

With several organisations extending their support to the Samyukt Kisan Morcha’s (SKM) call for a Bharat Bandh on Monday, to mark the first anniversary of the three ‘controversial’ farm laws getting Presidential assent, traffic in Bengaluru city is likely to take a hit.