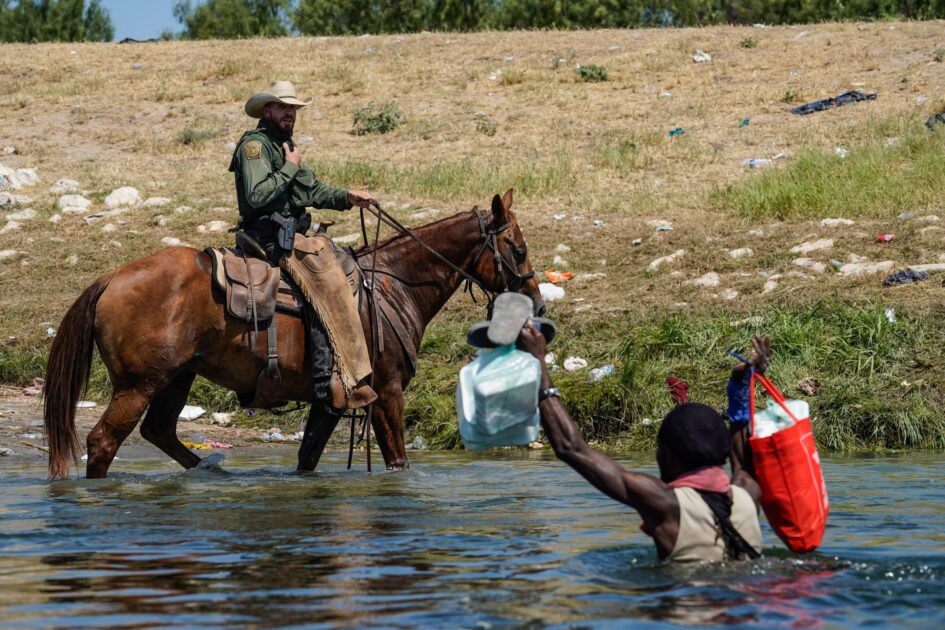 This story was originally published by Common Dreams on Sept. 20, 2021, and is shared here under a Creative Commons Attribution-Share Alike 3.0 License.

Progressive leaders and activists on Monday reacted with shock, disgust, and condemnation of an immigration system “designed for cruelty” toward migrants following the publication of photos showing mounted US Border Patrol agents using their horse reins like whips to round up Haitian asylum-seekers along the Texas-Mexico border.

The El Paso Times reports whip-swinging agents on horseback charged at migrants carrying food and water as they waded across the Rio Grande near Del Rio, in Val Verde County, on Sunday.

According to the paper:

As the Haitians tried to climb onto the U.S. side of the river Sunday afternoon, the agent shouted: “Let’s go! Get out now! Back to Mexico!”

The agent swung his whip menacingly, charging his horse toward the men in the river who were trying to return to an encampment under the international bridge in Del Rio after buying food and water in Ciudad Acuña, Mexico. One migrant fell as he tried to dodge, others shielded their heads with their hands.

In video footage published by Al Jazeera, one Border Patrol agent disparages migrants, saying, “You use your women? This is why your country [censored], because you use your women for this.”

As the agents retreated, the Haitians returned to the overcrowded camp where more than 10,000 migrants are waiting to exercise their legal right to claim asylum from political violence and natural disasters.

Haitian officials are asking the Biden administration to halt the internationally condemned expulsions of thousands of Haitians under Title 42, a section of the Public Health Safety Act which former President Donald Trump invoked early in the Covid-19 pandemic to swiftly remove asylum-seekers from the United States.

Even as the Biden administration announced Monday that it would seek to resettle 125,000 refugees in the next 12 months, Haitians in the border camp spoke of desperate needs today.

“Sanitary products, there aren’t any. Food, there isn’t any either. They don’t give you anything,” said a man who gave only his first name, Nicolas.

When informed of the Biden administration expulsions, Nicolas—who traveled from Haiti to South America, then across all of Central America and Mexico to reach the U.S. border, told Al Jazeera that “what kills me… is that everyone knows what we Haitians are going through. There’s no president. Crime is high. Students can’t go to school. There’s no work. The economy’s down. People cannot put up with that. Deportation is not good for us.”

When pressed about whether the agents in the photos should be allowed to act in such a manner, Psaki added: “Of course they should never be able to do it again.”

“I don’t know what the circumstances would be, it’s obviously horrific, the footage,” she added. “I don’t have any more information on it, so let me venture to do that and we’ll see if there’s more to convey.”

“To control the horse, long reins are used,” Mayorkas said, “but we are going to investigate the facts.”

United States Border Patrol Chief Raul L. Ortiz added that “operating in a riverine environment on horseback is a difficult situation, and trying to… control those horses so that we do not get in a position where we injure a migrant as they’re trying to make that treacherous trek across that river is probably more important than anything, and I’m pretty sure and confident that that’s what was happening.”

Observers fluent in the history of anti-Black and anti-immigrant violence were confident something else was happening.

Guerline Jozef, co-founder and executive director of the California-based Haitian Bridge Alliance, told Democracy Now! that the photos show “the horrific reality that we are living right now.”

The pictures you are seeing with this officer on his horse and literally whipping… the Haitian migrants, the Black bodies, that is not a new picture in America. That is the picture of the system, of the anti-Black racism that the system is based upon.

As a Black woman, as an American woman, as a Haitian woman, I am horrified by that picture. I am horrified that today, in 2021, we, as the United States of America, are behaving in such a way, where we literally do not even consider the humanity of a person, so that the world is watching, and that is the picture they are seeing. The picture they are seeing is of men on horseback whipping Black bodies. That is what the world is seeing in America right now.

As numerous conservative observers denied that the photos showed Border Patrol agents whipping asylum-seekers, Project on Government Oversight (POGO) senior ethics fellow tweeted, “How the hell would it even matter if someone is using an object that was marketed and sold as a whip or using some other object to whip a human being? It’s whip if it’s used as a whip!”

Aura Bogado, senior investigative reporter and producer at Reveal, asserted that “there is no context and there [are] no circumstances under which it’s in any way acceptable to whip human beings.”

“We don’t have money, we don’t have anything. We spent two months getting here on foot,” Charles Edirame, who was in the camp with his wife and daughter, told the El Paso Times. “In Haiti, we don’t have a president. There was just an earthquake. How can I go back to Haiti? If I go back, I could die the next day.”