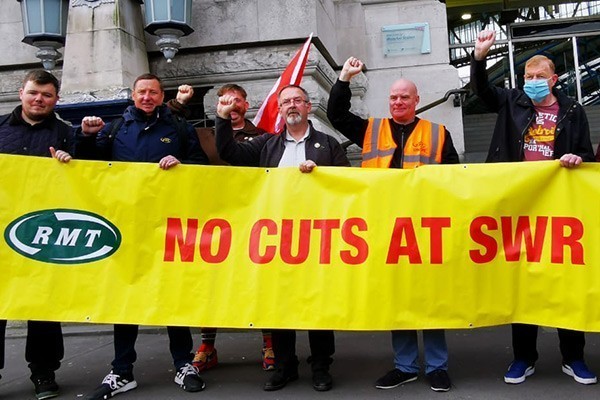 ScotRail workers in the RMT union are continuing their strikes despite attacks from bosses and the Scottish National Party (SNP).

Workers are fighting for the same overtime that pay train drivers receive.

Ticket examiners are also being re-balloted.

The dispute involves ­hundreds of workers and has been running since March.

Team managers in the TSSA union acted in solidarity with the RMT and voted to strike after being used as strike-breakers.

Cleaners and ­gateline workers employed by ScotRail also continue actions short of strike, including an overtime ban. Despite the union ­negotiating with bosses for a pay rise, no offer has been made.

As a result the union is balloting to strike during the Cop26 conference in November.

Five SNP MPs shamefully attacked the strikes over this.

Elsewhere on ScotRail 250 engineers in the Unite union have voted 78 percent in favour of a strike over pay and job losses.

The unions should unite all these battles to beat ScotRail—and the Scottish government.

Disputes have been running for four months with workers claiming one onboard ­manager and senior conductor isn’t enough to safely operate 12 carriage trains.

Strikes are planned every Sunday until 26 September.

The workers in the RMT union are calling for a pay rise to meet professional pay rates. Other depots in Yorkshire, Wessex and the South West are also balloting over the same issue.

The Unite union members are preparing to more pay and improved sick pay. The ballot is set to close on 20 September.

Workers oppose the ­victimisation of two Unite union reps whilst also standing against the overuse of agency staff.

They are also calling on Transport for London bosses to begin pay negotiations.