Unite in Northern Ireland: all eleven councils on strike – News from the Frontline 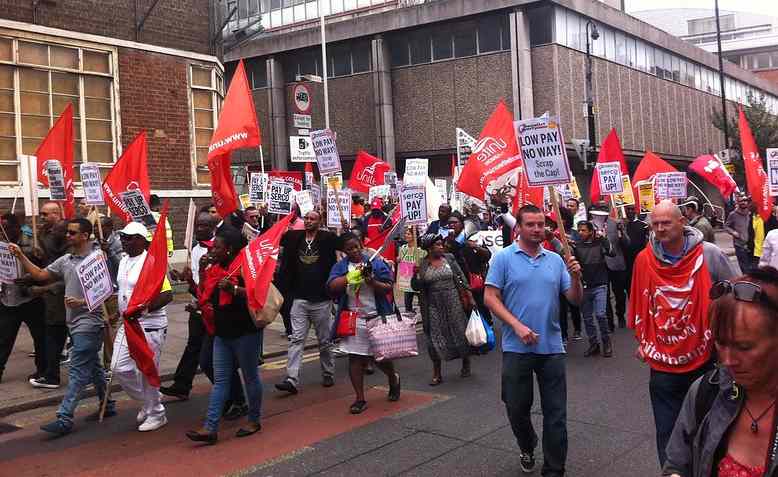 Local government workers across the housing and education sectors are striking all this week until Sunday 27 March. Unite says further strike days will be announced thereafter.

The dispute is over pay and focuses on the rejection of a 1.75% offer proposed by the bosses.

“Unite members are standing on picket lines across Northern Ireland to win a wage that they can live on.

“It is a disgrace that these council, education and housing workers are being hung out to dry by politicians, while their incomes get destroyed by rocketing inflation.

“Over the past days, our members have been vilified by their employers. This is a blatant attempt to avoid any discussion of how workers’ incomes are falling ever further behind living costs.

“The cynical attempt to undermine the right of workers to take strike action has clearly fallen flat. The public overwhelmingly support those standing on the picket lines.”

This isn’t going away and News from the Frontline will keep you updated with the new strike dates.

Teachers at the independent Pocklington School in the East Riding are set to strike after being informed that they are to be removed from the Teachers Pension Scheme.

The school is threatening to use ‘fire and rehire’ tactics to force teachers to sign new contracts that will leave them worse off in retirement.

This follows similar attacks on workers’ rights at the Girls Day Schools Trust that were partially defeated by strike action, suggesting that attempting to remove staff from the TPS may become a regular occurrence in the independent education sector.

NEU cleaners at the Connaught School for Girls in Leytonstone are balloting for strike action due to the planned privatisation of the cleaning service.

The company that they are to be outsourced to is planning to cut contracts from 52 weeks per year to 43, meaning already low paid but vital workers will lose 2 months’ pay. They will also lose access to the local government pension scheme should this privatisation go ahead.

GMB bin workers in Wiltshire have ended their industrial action in success:

“GMB is extremely proud of our members who have stood firm during almost two weeks of strike action.

“We were pleased to be able to negotiate an improved offer which has been almost unanimously accepted by the members.

“We will now be carefully observing what happens next to ensure the employer treats those workers who have taken lawful industrial action with respect.

“There must be no retaliation and members return to work tomorrow.”

Meanwhile, GMB has said that bin workers in Solihill have confirmed that their action will be commencing on Monday and until Friday the same week.

Elsewhere in the West Midlands, the long-running Unite strike by their bin lorry drivers has carried on, with the council continuing to refuse to meet with the workers. A mass petition was submitted last week in defence of a member who has been disciplined by management, and a mass rally is being held at 11an in the city this Saturday to support the workers.

In nearby Rugby, Unite is preparing bin workers there for a struggle over low pay that the workers have been an issue for years before the present crisis. A schedule for this is yet to be announced.

Just Eat couriers in Derbyshire have become the latest group of “gig economy” delivery workers to begin taking action in recent months. Just Eat reduced courier fees, so the workers affiliated to the IWGB union and then began carrying out daily stoppages each afternoon.

Starting in Sheffield, then spreading to Chesterfield and other places further away like Sutton-on-Ashfield, IWGB couriers’ actions have been gradually spreading in many smaller towns and cities.

Workers at Valeo Confectionary began their two hours per shift strike action this week in a dispute over pay.

“These are low paid workers, who work in hard and difficult conditions to produce sweets for various supermarkets and suppliers, including M&S. All they want is a decent day’s pay for doing it.”

“It was nerve-racking walking out the first time to take industrial action, but what choice did we have? Many of my friends at Valeo have kids to feed and clothe and it’s just getting harder and harder for them with the cost of living the way it is.

“Some are now going without so they can provide for their kids – I don’t know how Valeo bosses sleep at night. All we want is a decent rate of pay that we can live on – and respect from management. It’s not too much to ask for.”

The strikers are supported by local MP Rachael Maskell.

In the midst of a national campaign, the academics’ union begins five days’ strike action from 30 March.

The dispute is over pay and holiday allowances and has a solid “eighty per cent on an eighty-five per cent turnout” mandate from the staff. This bodes well for the picket lines.

“Our members at the college have been patient and have held off escalating to industrial action but with a cost of living crisis and the employers lack of willingness to make a pay award or equalise holiday allowances for all staff we have been left with no option but to give notice of eight days of strike action.

“Our demands are not unreasonable and the hard-working staff employed by University of Sheffield International College deserve better.”

UCU needs to get generalising this militancy.

Over 100 couriers, members of the App-Based Delivery and Couriers Union staged a 6-hour strike and picket in Belfast on Wednesday.

The union is in dispute with phone app giants, including Uber Eats, Deliveroo and Just Eat. After Xmas, Just Eat dropped its rates by 25%, and the union claims that the downward pressure on rates, added to inflation, and made worse by the increase in the price of fuel means that the ADCU demand for a minimum guarantee of £10 an hour plus costs.

The strikers were delighted to welcome activists from the Unite union’s Hospitality Branch, who turned out to show their solidarity.

More than 170 workers at Riverside Bakeries in Nottingham start an all-out strike from next week, in protest at a company pay ‘rise’ that will mean a cut in takehome pay for many workers.

The ‘rise’ goes hand in hand with changes to shift patterns and overtime which leaves many workers worse off.

As one member put it: “The company advertises as having 30 years farmhouse experience in producing quiches and tarts, and thinks we should accept wages from 30 years ago.”

NEU Workers at Bobby More Academy in East London balloted to strike over workload and staff shortages, they secured a solid mandate to strike and as a result, management gave in to their demands.

Teachers were overworked; having no breaks and were working excessive hours. Now they will not have to work through break times, 6 extra teaching assistants will be employed and vacant posts will be filled promptly.

Queen Mary University UCU workers secured a brilliant result in their local ballot against management attacking their right to strike by deducting 100% of workers wages for Action Short of Strike (ASOS).

ASOS includes not rescheduling lectures cancelled due to strike action, meaning workers were returning to work from strike action not knowing if they would be paid for the work they do.

84% of staff voted yes to strike, 87% votes yes to ASOS and the turnout was 54.6%, their highest turnout yet. Since the ballot result bosses have said that wages will not be deducted for not rescheduling lectures after their strike during the month of March. You can donate to the hardship fund here.

650 NASUWT teachers in the Isle of Man are being balloted to strike after rejecting a 2% pay offer, the ballot closes on 4 April.

The NASUWT said that since 2010 Manx teachers’ pay had fallen by nearly 30%.

“Salaries have been eroded during a period when workload has increased exponentially and when more and more is being expected of teachers.”

The workers who are employed as domestic and porters secured a massive 98% yes vote with an impressive turnout of 61.4%. The workers are fighting for the London Living wage £11.05 an hour and proper sick pay.

Bosses are worried and GMB says management is calling workers into meetings attempting to put pressure on them not to strike.

“They are on poverty pay have never had a voice at work before. Now they can see the power of being organised within a campaigning trade union for the very first time. They care about the patients, and they don’t want to be forced to go on strike by G4S”

Employers in higher education have plenty of money but won’t spend it on their workforce. Only mass action will force them to concede, argue Counterfire UCU members. Read more here.

Manchester pallet repairers at Chep in Trafford Park have now passed 16 weeks of 24/7 strikes. Please ask your union branch to make a donation to their strike fund and stop Chep’s attempt at starving them back to work. Donations can be made to Unity Bank NW/1 Strike Fund. Account 20217873. Sort code 60-83-01.

The deepening decay of unionism in Northern Ireland

Chep strike: Manchester unites for a solidarity rally – News from the Frontline