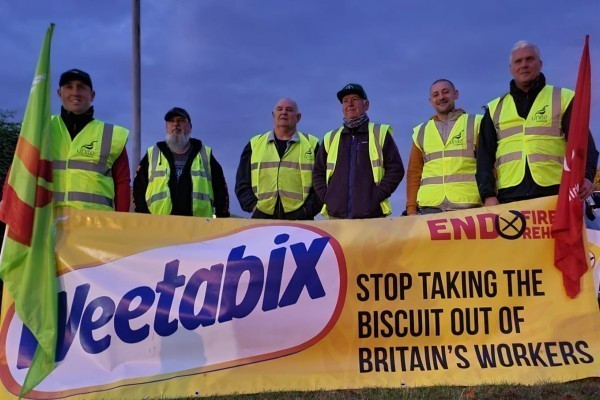 Workers at Weetabix factories in Kettering and Corby in Northamptonshire entered their fourth week of strikes against fire and rehire this week.

Some 70 engineers employed by the company are taking part in 48-hour strikes on Tuesday and Wednesday of each week until the end of November.

Changes to contracts by the company will result in some losing up to £5,000 annually, and shift ­pattern changes mean longer working hours.

Engineers at the factory work around the clock to ensure no ­interruptions to food production.

And they worked throughout the pandemic to ensure that profits were made for the bosses.

Now, the bosses want to repay them by slashing their income.

Last year Weetabix, which also owns Alpen and Oatibix, saw its profits skyrocket up by almost a fifth to more than £81 million.

And its American owner, US cereal giant Post Holdings Inc, made an operating profit of over £500 million.

Weetabix and its owners are refusing to accept that its changes amount to fire and rehire.

They say that the terms of the contracts dictate that it can be changed.

But some workers received a letter from the company informing them that if they didn’t accept the changes, they would indeed be fired.

Workers have been solid in their resistance, with some working for the company for over three decades taking part in their first industrial action.

Yet confusion over strike pay has left some worried about momentum going forwards. Unite’s fire and rehire strike pay should amount to £70 a day. Some workers have been given a figure of less, and others more.

members financially, particularly given the size of the Weetabix strike.

To escalate the strike further to all-out action, Unite needs to reconsider its financial support to all strikers.

Currently strikers say Weetabix will be feeling the pressure from the strike, with managers filling in for the missing engineers.

But workers then go back in for five other days and have to fix things from the days they were on strike.

Workers shouldn’t be held back on escalating action because of a lack of funding.

And it would be a huge victory for Weetabix workers and the whole union to defeat fire and rehire.

Not only will it ensure the strikers keep their existing pay and conditions, but it’ll also scare other bosses from implementing the same measures.

It’s crucial for the union to have its first big win against fire and rehire under the new ­leadership of Sharon Graham.