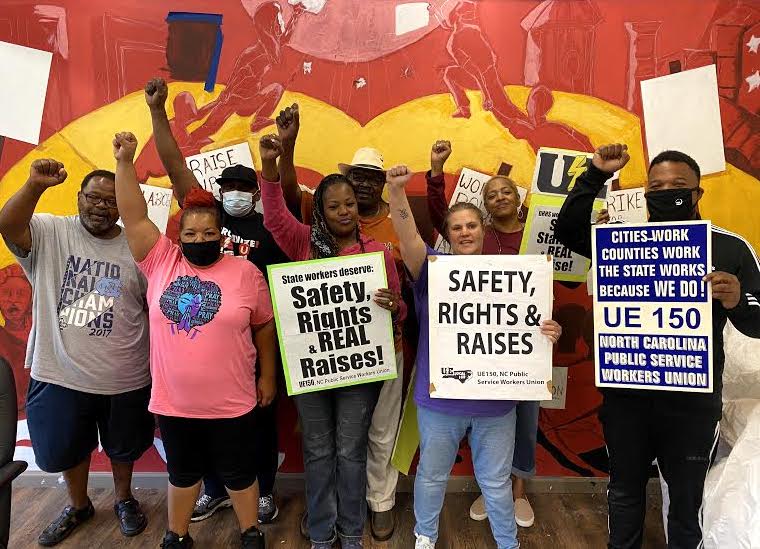 Hundreds of workers from across the country attended the United Electrical Workers’ 77th national convention, Sept. 20-24, held, virtually, under the theme “Leading Through Tough Times.”

Delegates debated over a dozen political resolutions from “Medicare for All” to “A Just Economy for All,” while supporting LGBTQ+ workers’ rights, fighting women’s oppression and uniting on international solidarity that charts the union’s independent political platform.

This convention also hosted the founding meetings of two new caucuses for Black workers and for women workers.

With its long progressive history, the UE has broken ground ahead of other unions on many political issues, like ending the blockade against Cuba and supporting solidarity with the Palestinian freedom struggle through the Boycott, Divestment and Sanctions (BDS) movement.

During this convention, the UE continued its tradition by becoming the first national U.S. union to support defunding the police. The resolution on “Fighting Racism” included a clause to urge “locals to work with local municipal workers’ unions and community groups to reallocate funds from bloated police departments to meet the needs of city workers and community wellness.”

“Racism is one of the greatest evils of capitalism but also the greatest illness of our society,” stated Erica Collins, member of UE Local 119 and a paraprofessional in the Winslow, N.J., school district. Collins continued, “The coronavirus pandemic inequities of Black and Brown people and the death of George Floyd, amongst many others, have unveiled America’s greatest sin, white supremacy . . . We learned that some of our worst terrorists are domestic.”

The anti-racist resolution was a direct result of the work of UE Local 150, North Carolina Public Service Workers Union, which organizes city workers across the state. Local 150 has led recent, successful campaigns, most notably in Durham, N.C., to move money and positions away from police departments to address the needs of other city workers and the Black community.

Joining up earlier in 2021 with the Durham Beyond Policing Coalition, Local 150 played a big role during city budget discussions by advocating for creation of an entirely new Community Safety Department, to be staffed with social workers, mental health workers and emergency responders, rather than armed police.

This new department was approved in the Durham city budget, effectively reallocating 20 positions from the current police department into the new department each year, for the next three years. Now when a Durham resident calls 911, they have a choice between an armed cop or an unarmed specially trained worker responding to the call.

“The police already have a bloated budget. But it is not even about the pay; it is about the weapons they use to enforce the law,” stated Dominic Harris, president of the Charlotte City Workers Union chapter of UE Local 150.

Harris, crew chief in the Water Department, stressed: “A lot of that money could be transferred from the police to other departments. In other departments we are looked down upon and not looked upon as highly qualified public servants. We need respect on our pay scale. By defunding the police, it helps highlight the whole idea that policing in America needs to be changed.”

In addition to the crucial discussions and resolutions passed, the UE celebrated the entry of over 3,000 new members into the union since its 2019 convention. UE Director of Organization Gene Elk shared powerful stories of new worker organizing from New Jersey to California to Virginia and everywhere in between.

In Kentucky, over 400 federal contract employees, who process immigration paperwork, organized into the UE in June 2020, becoming the largest National Labor Relations Board election success during the COVID-19 pandemic at that time. In June 2021, over 250 mostly Latinx immigrant workers at the world’s largest independent bottling company, Refresco, organized to join the union in Wharton, N.J.

“We do the work that makes this company rich. But they only see us as dollar signs, not people. This was our time. It was now or never. With our union we will finally win the better pay and respect that we deserve,” said Cesar Moreira, a batching technician in the blend room at Refresco.

A Jim Crow era law in Virginia banning collective bargaining for public workers was partially overturned in 2021. As of May 1, city, town and county government workers could legally bargain for improvements and justice at their jobs.

“I have worked with some people that work so hard, but we are truly underappreciated. I believe collective bargaining would help the staff of Virginia Beach,” stated Christina Wilson-Darien, who has worked as a behavioral assistant for 17 years for the City of Virginia Beach. She emphasized: “We are understaffed. It is a lot of strain on your body working with folks in wheelchairs; it puts a toll on you. But we are coming together to make the changes.”

UE is indeed leading through tough times. Workers left the convention with a renewed sense of purpose and clarity on political direction.