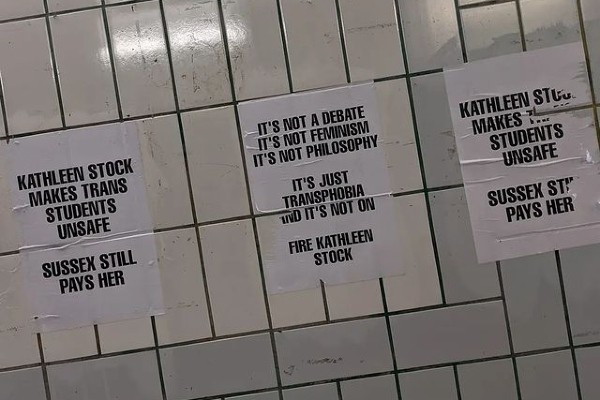 Right wingers and university bosses have rushed to defend University of Sussex lecturer Kathleen Stock after she was accused of transphobia.

The university’s vice chancellor Adam Tickell told BBC News that staff “have an untrammelled right to say and believe what they think”.

The university also tweeted that Stock was being targeted for “exercising her academic freedoms”.

In fact Stock is being criticised for making comments that rightly outrage most trans people and should be opposed by everyone who wants to fight oppression.

The background to the issue is not some calm academic debate. It is that homophobic hate crime in Britain has trebled—and transphobic hate crimes quadrupled—in the space of five years.

The Tories are zeroing in on trans rights as an element of their “culture wars” where groups of people are demonised and scapegoated in an attempt to win votes and divide opponents.

The recent Tory conference was actuated with demands for action against “woke” activists.

This is code for those who fight against racism and women’s oppression as well as transphobia.

Stock insists that she is not transphobic.

But she has said that “many trans women are still males with male genitalia”.

She also believes that gender identity is not more important than biological sex, particularly when it comes to “law and policy”.

The University of Sussex student union put out a good statement which said, “Students have a right to protest when their rights are being questioned, or when there are discriminatory narratives about them being shared.

“Such narratives contribute to a national culture war which ignores the disproportionate discrimination experienced by trans and non-binary people in the UK.

“Contrary to speculation by those on social media, no effigies have been made or burnt at Sussex.

“Peaceful protest, which is all that the protest group has done, is not censorship. It has a basic democratic function. Those involved are exercising their civil liberties.”

Students are right to protest. But calls for sackings don’t fit here and should be directed against fascists and organised racists.

Meanwhile no Tory ministers or right wing media are complaining that Bristol University has sacked Professor David Miller. He has been falsely condemned as antisemitic for his pro-Palestinian views.

The university management says the sacking is because “We have a duty of care to all students and the wider university community”.

Miller was said to have “discomforted” some students—which would certainly apply to Stock.

Realism, idealism, and the deradicalization of Critical Race Theory—Rethinking The CRT Debate, Part 2