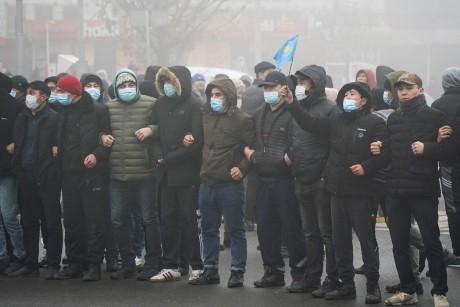 In early January, mass protests erupted in Kazakhstan. Initially, the protests were the workers’ reaction to more than doubling of car gas price from 50 tenge per liter to 120 tenge per liter.

Protests began in the gas and oil-bearing western regions of the country, in particular in Zhanaozen, a city with a rich history of labor struggles. Here, in 2011, workers in the mining industry went on strike, in response to which the authorities responded with state terror and the shooting of workers’ demonstrations. At that time, dozens of workers were killed in Zhanaozen.

Seeing no willingness on the part of the government to make concessions, the protests began to spread not only to cities in the west – Aktau, Zhanaozen, Atyrau and others – but also throughout Kazakhstan. So far, such cities as Uralsk, Aktobe, Kostanai, Nur-Sultan, Pavlodar, Taraz, Shymkent and Kyzylorda have been affected by unrest. The most violent confrontation is taking place in the southern city of Alma-Ata.

When the government agreed to return gas prices in the western regions of the country to their original value, it was already too late. Not only because the protests had spread to almost all regions of the country, but also because the protesters had expanded their demands, which now affect a wide range of socio-economic and political relations. Here is an incomplete list of the demands of the workers of Kazakhstan:

1. A change in the political regime

2. The coming to power of a person recognized as revolutionary

3. The complete removal from power of Nazarbayev and all his proxies, including the current president of the country Tokayev

4. Popular elections of akims (mayors, governors) of each region and each city (at the moment, these positions are filled by appointment from above)

5. Return of the 1993 constitution (this constitution differs from the modern constitution in that, for example, the legislative body of the state is the Supreme Soviet, not the parliament)

6. No prosecution of civil and political activists

7. Reduce the prices of housing and utilities services.

8. Reducing the price of food

9. Raising the wages of all workers

Based on this set of demands, we can conclude that the driving force of the protests are the working people of Kazakhstan. Among the demands it is impossible to find demands for the expansion of freedom of private property or lowering of income taxes for entrepreneurs. This may speak of the lack of influence of the petty bourgeoisie or the bourgeoisie on the protesting masses.

Because the authorities of the country showed their inability to meet all or at least most of the protesters’ demands, the protests began to escalate into open rebellion. The situation of the government of Kazakhstan was also exacerbated by a national strike in the country’s extractive industries.

This uprising is characterized by a high degree of violence. The rebellious workers are storming administrative buildings, disarming and capturing members of the National Guard and state police, seizing small arms from arms stores, building barricades and organizing street patrols.

This is particularly evident in Almaty, one of the country’s largest cities. Here, the rebels seized and burned to the ground the city’s akimat (mayor’s office), set fire to the president’s residence, and attempted to storm the city’s police department and the military academy. At one point, the security forces left the city altogether.

State propaganda accused the rebels of looting and plundering. However, the rebellious workers themselves organized patrols to identify looters and stop their activities on the spot. There are unconfirmed reports that authorities may have deliberately released convicted prisoners from detention for the purpose of looting and pillaging.

It’s worth mentioning that President Tokayev made some concessions after some time: he issued the decree about reduction and fixing of gas prices, dissolved the government, dismissed the former President of Kazakhstan Nursultan Nazarbayev from the post of the Chairman of the Security Council and took this post by himself. The latter is significant because Nursultan Nazarbayev, having made the transit of power and appointed his successor Tokayev to the presidency, continued to exert enormous influence over government policy. At the moment, Nursultan Nazarbayev has gone into hiding with his daughters in Russia.

The problem is that the current President Tokayev has no concrete plan to implement reforms and meet the demands of the rebels. This fact contributes to the continuation of the rebellion.

Also important is the fact that National Guard and police units are partially siding with the rebels. There are numerous testimonies of armed guardsmen and policemen refusing to use force against the workers, some of them joining the ranks of the protesters, and one of the units has gone over to the side of the resistance along with its armored vehicles.

Counter-revolutionary intervention by Russia and its CSTO allies

Rapidly developing events made it clear to Tokayev that it was not possible to cope with the situation using personal forces. Therefore, on January 5, he contacted President Vladimir Putin of the Russian Federation and President Alexander Lukashenko of the Republic of Belarus by telephone, after which he sent an official appeal to the CSTO to intervene in the situation and “restore stability in the country. But the CSTO is a collective security treaty against external threats, so Tokayev needed to accuse the rebels of having been organized by foreign forces, of being “terrorists,” and of being under foreign control.

The CSTO accepted President Tokayev’s petition and agreed to send troops to Kazakhstan. The following states are currently participating in the intervention:

Belarus, Tajikistan, Armenia and Kyrgyzstan are now semi-colonies of Russia and occupy a subordinate position to its imperialism. This means that the CSTO, despite the formal equality of its members within it, is also militarily and politically subordinate to the will of Moscow.

There is a good chance that the Russian authorities will once again fail to produce a “little victory”; on the contrary, it may turn out that the Russian Armed Forces will be delayed in Kazakhstan for a long time.

Combined with several other conflicts in which Russia is now directly or indirectly involved, a presence in Kazakhstan could contribute to the collapse of the reactionary Putin regime in the long term.

There is also the possibility that the long-term presence of Russian military forces could lead to the emergence of new separatist “republics” in Kazakhstan, along the lines of the “LPR” and “DNR” in Ukraine.

Nationalist-oriented Russian activists and media figures call for the occupation of the northern regions of Kazakhstan, where the Russian and Russian-speaking population is widely represented. The nationalists refer to the fact that Russians in Kazakhstan are threatened by inciting ethnic hatred and Russophobia.

It is noted that Russophobia is provoked first of all by the fact of Russian intervention and appeals to occupation by Russian nationalists.

Of course, no evidence of anti-Russian demands and sentiments among the rebellious workers is given. The struggling workers of Kazakhstan do not make demands and slogans aimed at inciting ethnic hatred, chauvinism or racism. All of this exists only in the environment of Russian nationalism.

As of January 7, unrest and strikes continue in Kazakhstan, with violent armed clashes between supporters of the revolution and the army in the city of Alma-Ata.

Interventionist forces arrive in the country to suppress the protests. Losses on the part of both the security forces and the opponents of the current regime are already dozens of people killed and hundreds wounded, more than 3,000 protesters have been detained.

The rebels in Kazakhstan need broad support and solidarity. A huge role in the victory of the revolution against the interventionists is played by the mass movement within the aggressor country.

The interventionists, who invaded Russia after 1917 during the civil war, faced large-scale strikes in their countries and reluctance on the part of the workers to go to war against their brothers and sisters in class.

May the lessons of the past serve as an example to us all in the present.

“In Kazakhstan, there is now a real popular uprising”

Kazakhstan: Notes from activists in Almaty

Communist Party of Mexico: Solidarity with the struggle of the workers of Kazakhstan

Solidarity with the struggling workers of Kazakhstan! Stop the intervention, free the detainees!