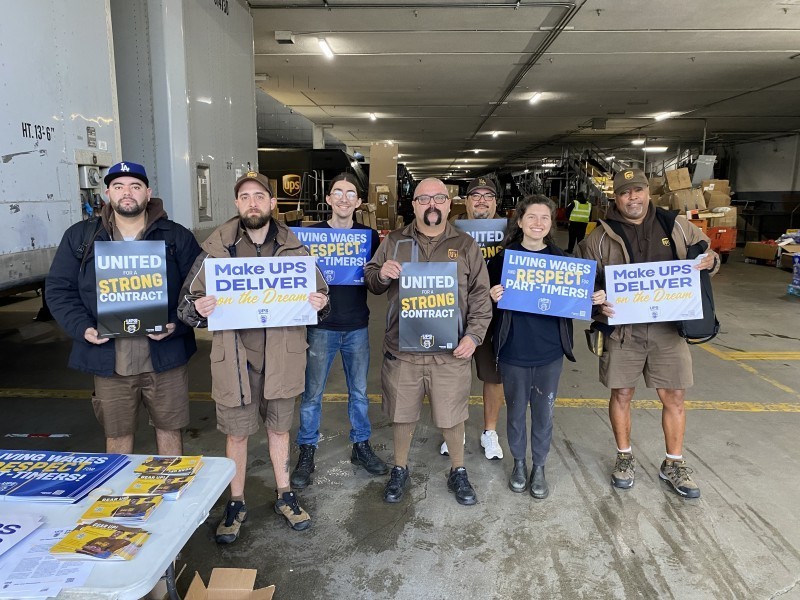 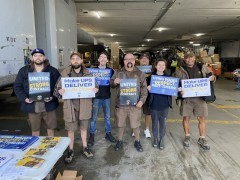 Los Angeles, CA – On Martin Luther King Jr. Day, which fell on January 15, Teamsters across the country joined the national action to demand that UPS “Deliver on the Dream” by pressuring the company to make MLK Day and Juneteenth paid holidays in the upcoming national contract.

Dr. Martin Luther King Jr. dedicated his life to the Civil Rights movement and all fights for justice. He walked picket lines in solidarity with workers and used his large platform to bravely denounce the evils of capitalism and U.S. wars. He was assassinated during the 1968 Memphis sanitation strike after marching alongside 1300 African American workers who were on strike demanding higher pay, a guaranteed work day, and benefits. The workers called the strike after two of their coworkers were crushed by a garbage truck on the job.

“It’s important that we honor the legacy of MLK. When he died he had been out supporting striking workers, as he saw organized labor as key to building a better future. The solidarity he was fighting for is the strongest tool the working class has,” said Severin Mortensen, a UPS part-timer and steward out of Local 243 in Lansing, Michigan.

MLK Day and Juneteenth – which celebrates the end of legal U.S. slavery in 1865 and was added as a federal holiday in 2021 – are the only two federal holidays in the U.S. that honor the historic struggle for civil rights and against national oppression. Unionized workers have a great opportunity to demand their employers recognize all holidays that honor those who have fought for the working class and oppressed nationalities. Unless recognized in a union contract, private sector companies are not obligated to provide holiday pay or paid time off for these federal holidays.

“It’s a disgrace that UPS doesn’t recognize MLK Day as a paid holiday. The company likes to pay lip service to the legacy of Dr. King when it’s convenient for them but not when it hurts their profits. They need to put their money where their mouth is,” said Bill Aiman, a part-time UPSer out of Local 728 in Atlanta, Georgia.

UPS Teamsters in nearly every state held parking lot rallies and passed out flyers and signs to engage their Teamster siblings in the contract fight. Along with making MLK day and Juneteenth paid holidays, the biggest contract demands are to win higher part-time pay, end excessive overtime, create more full-time jobs, stop harassment and surveillance, end two-tier wages, and end subcontracting. If UPS does not agree to these demands by July 31, UPS workers will go on strike. Surely Dr. King would have joined them on the picket line.

HR IS NOT YOUR FRIENDA friendly reminder from Teamsters Local 89!#Teamsters

UPS and the US Heatwave: Bosses Profit on Deadly Conditions

Support The Socialists This Holiday Season!

Grueling holiday conditions on the horizon for airport workers