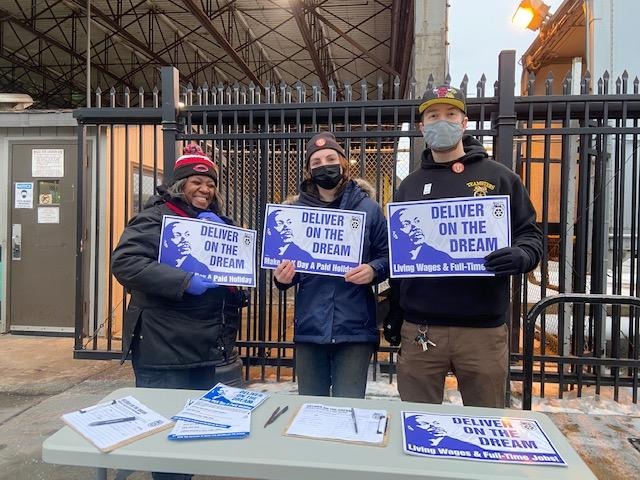 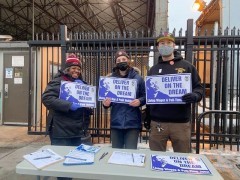 Teamsters petitioning in Chicago on MLK Day
(Fight Back! News/staff)

Signing the petition at UPS facility in Jacksonville, FL. (Fight Back! News/staff)

“People forget that MLK was as strong an advocate for the labor movement as he was for the civil rights movement, and it’s important that we honor MLK day to re-establish that legacy in the labor movement,” said Emily Butt, a part-time package handler and steward from Lansing, Michigan.

The International Brotherhood of Teamsters (IBT) passed a resolution at their 2021 convention stating that the IBT will launch a campaign to make MLK Day a paid holiday in all Teamster contracts. The resolution was initially proposed by General President-elect Sean O’Brien. Sean O’Brien and the Teamsters United slate won a landslide election against the Hoffa-backed Teamster Power slate late last year. Sean O’Brien and the Teamsters United slate will take office later this year in March.

“People fought hard for MLK day to be a national holiday. It’s time the Teamsters observe it and make it a paid holiday. The workers deserve it,” said Adam Gerado, a part-time package handler from Jacksonville, Florida.

The push to make MLK Jr. Day a paid holiday is the first action of many signaling that a Teamsters United administration will not be business as usual. The Teamsters United slate ran on a platform of winning better contracts, organizing key workplaces like Amazon, and bringing the fight back to the Teamsters union.

“Dr. King’s dream is still unfulfilled when we still have part-timers working for poverty wages with no access to full-time jobs. By fighting to make MLK Day a paid holiday UPS Teamsters are saying it is time we all be treated with respect,” said Eliza Schultz, a part-time package handler from Chicago.

What could this moment of labor strife become if workers get more organized?

Will Ethiopia Become Biden’s Libya 2.0 or a Driver for an African Renaissance?

‘We have to become emancipators’