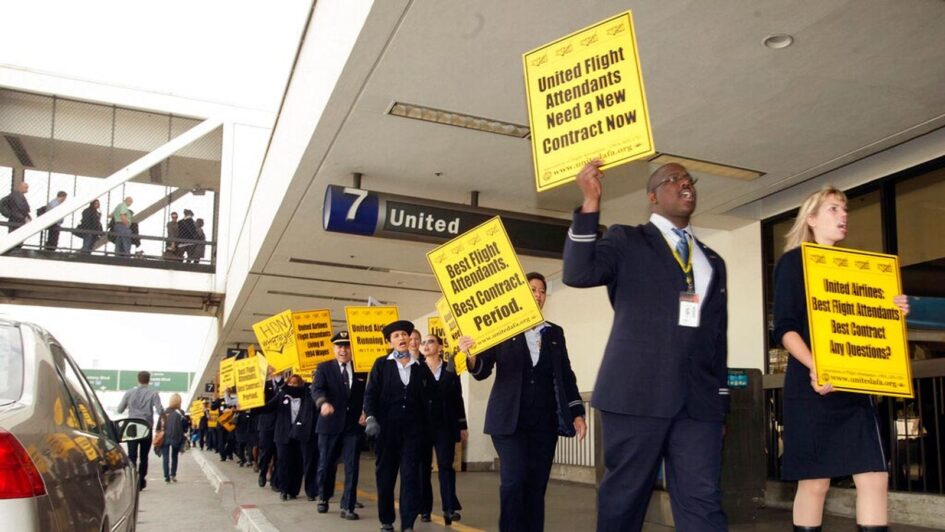 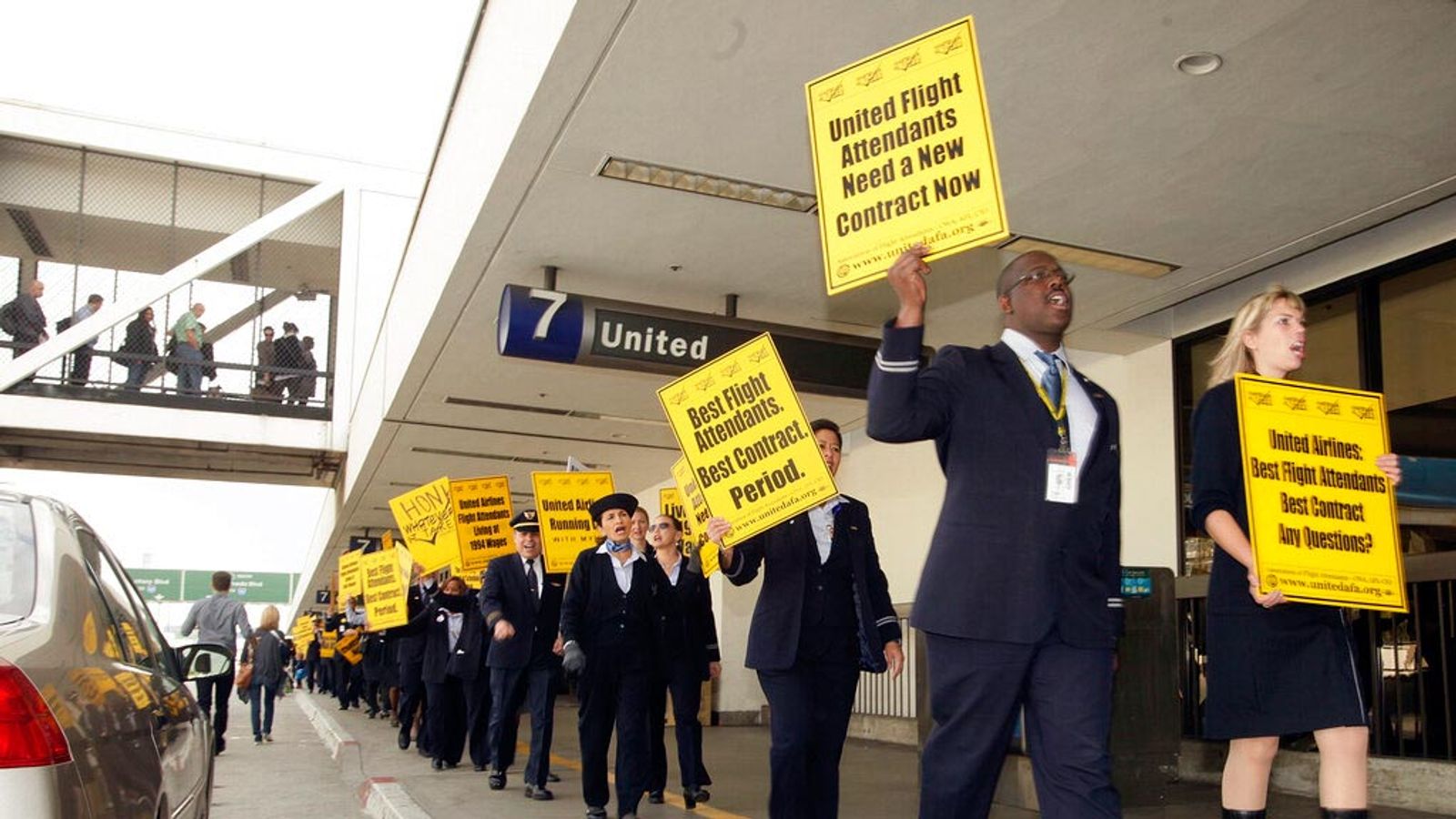 Growing militancy among US airline workers over intolerable work conditions and low pay is fusing with the rebellion by railroad workers, who are heading toward an historic confrontation with the Biden administration and the US Congress with the passage of legislation imposing a contract that workers have rejected.

Airline workers are in virtually the same situation as railroaders, with flight crews facing short staffing leading to overwork and potentially catastrophic pilot fatigue. While airlines are raking in bumper profits, boosted by massive government subsidies, airline workers, whose pay has long been stagnant, are being ravaged by inflation.

Like railroad workers, airline workers are confronting a ruthless corporate management. The union apparatus, which is embedded with that same management, is citing the reactionary Railway Labor Act (RLA) to block strikes and tie workers up in endless, fruitless negotiations aimed at wearing down resistance.

On November 16, American Airlines flight attendants held pickets and rallies at 11 major airports to highlight their demands, after they were rejected by management. The Association of Flight Attendants covers 25,000 American Air flight attendants and has been bargaining since before the start of the pandemic for a new agreement.

According to AFA President Julie Hedricks, in comments to the Guardian earlier this month, “Our staffing has also been cut. We’re back to flying the same amount of flights and hours we flew back in 2019, prior to Covid, with thousands of fewer flight attendants.”

On October 31, 15,000 Delta Airlines pilots voted by 99 percent to authorize strike action. The same week, pilots at United Airlines voted to reject a tentative agreement by 94 percent. More than three years of talks have not led to an agreement.

However, pilots face a labyrinthian mediation process under the RLA that places almost impossible obstacles on the path to legal strike action. First, the National Mediation Board must decide that additional mediation efforts would not be productive and release the airline and union to arbitration. If either side declines, there is a mandated 30-day “cooling off” period before a strike can legally begin.

As in the railroads, the airline union bureaucrats’ not only refuse to fight the anti-democratic RLA, they welcome it as a means of suppressing a movement of their own members, which they fear could break out of their control. This includes the Democratic Socialists of America (DSA) leader of the Association of Flight Attendants-Communications Workers of America (AFA-CWA), Sara Nelson. It is noteworthy that Nelson’s fellow DSA members in Congress, including Alexandria Ocasio-Cortez, have voted to back the strikebreaking legislation against railroad workers.

The hypocrisy of the Biden administration was demonstrated last week by the remarks of Transportation Secretary Pete Buttigieg, who denounced a possible strike by rail workers as “not acceptable.” He added, “If we don’t have [a] healthy, functioning, strong rail system … It would not be good.” He continued, “We don’t have trucks, or barges, or ships, in this country to make up for the rail network.”

While supporting strikebreaking legislation to impose a pro-company contract on railway workers, the transportation secretary has taken a kid glove approach to airlines, which have wreaked havoc on the air transportation system. The airlines, similar to the railroads, cut thousands of jobs and over the last two years have engaged in massive price gouging while stranding thousands of passengers with flight cancellations and delays.

Well aware of the public anger towards the airline executives, on November 13 Buttigieg imposed a wrist slap fine of $7.25 million on six air carriers on who owe collectively more than $600 million to passengers whose trips were impacted by flight delays and cancellation. None of the major US airlines were fined, and all but one of the six were overseas carriers.

According to official government data, the plurality of flight cancellations and delays, 40 percent, are due to the carriers themselves. For the first eight months of 2022, US airlines reported 951,181 delayed flights to the Department of Transportation.

Now, US airlines and federal regulators are proposing the unprecedented step of reducing cockpit crews to require just one pilot per plane in order to deal with staffing issues, rather than increase the hiring and training of pilots and raising pay. This insane proposal—opposed by everyone concerned with airline safety—dovetails the push for one-man crews on the railroads.

Airlines, meanwhile, are reporting bumper profits. American posted $483 million profit in the third quarter of 2022 off a record revenue of $13.46 billion during the first three quarters of this year. This despite the fact that the number of flights fell by 10 percent during the same period. Delta reported a $966 million profit in the third quarter, and during the same period United posted $942 million.

The air carriers obtained this result by taking advantage of the inflationary environment to jack up fares. Air fares rose a staggering 42.9% annually, according to recent Consumer Price Index, while overall inflation was only a little more than 8 percent.

This shameless profiteering follows the massive bailout of the airlines and other large corporations during the pandemic. Since March 2020, US airlines received $54 billion, supposedly to avoid mass layoffs and maintain their operations. That was more than any other single US industry. Despite this, over 80,000 airline workers were furloughed or lost their jobs during the pandemic. The airlines have still not returned to pre-pandemic levels of employment.

The manpower shortages and flight delays that are currently plaguing air transport come despite the massive infusion of government cash to prop up the airlines. Instead of using the government largess to bolster air transport, hire and train more staff and upgrade systems, a large portion of those taxpayer funds have gone to enrich airline stockholders and executives. In the face of even worse disruptions ahead of the holiday travel season, there have been demands raised for an investigation of the possible misuse of COVID funds.

However, no serious action to recoup billions in bailouts from airlines executives can be expected by the Democrats and Republicans, who are politically beholden to these very same airlines.

Airline workers must learn the lessons of the railroad workers in their battle against the rail companies. Over the past three years, railroad workers have been trapped in endless negotiations and mediation boards aimed at blocking their effort to strike and secure their interests.

During this process, the trade union apparatus worked deliberately and consciously with both the Biden administration and the rail companies to try to push through pro-company agreements. Finally, after workers rejected contracts backed by the apparatus, Congress has intervened with the support of the White House and the companies to pass legislation forcing these contracts through.

To fight for their interests in unity with railroad workers and all sections of the working class, airline workers should move now to form rank-and-file committees, independent of the pro-corporate union apparatus.

At the same time, the defense of the rights of airline workers as well as the traveling public requires an end to subordination of public transport to the profit interests of privately run airlines. A rational transport system, including safe conditions for workers as well as the public requires placing the airlines and other transport, such as rail and trucking, under the democratic public ownership and control of the working class.

Nurses and midwives protest against appalling conditions at Westmead Hospital