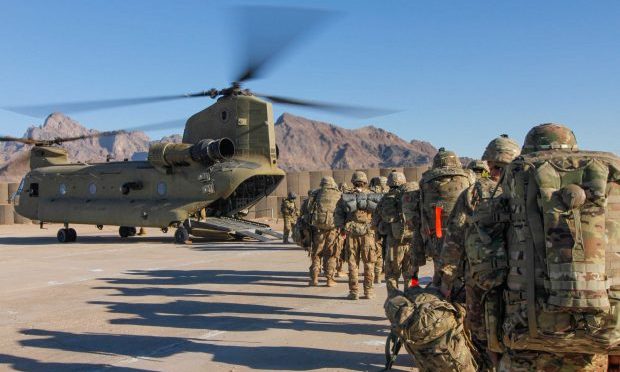 In two decades of imperialist occupation of Afghanistan, the USA has failed in every one of its war aims, all the way down from the hubristic nation-building aspirations of the early years (disavowed now but trumpeted loudly at the outset) to its final two years of humiliating talks with the Taliban-led resistance forces, and followed now by the most abject surrender of all US authority, the craven rout of the puppet Afghan army and the impending collapse of the US-backed government in Kabul.

That prediction of governmental collapse comes with the stamp of approval of the CIA. It wasn’t long ago that the agency’s gloomiest forecast was still giving the puppets a lifespan of two years, but the precipitate withdrawal of US forces has forced a further agonising reappraisal.

“Afghanistan’s government could collapse as quickly as six months after all US troops withdraw from the country, according to new analysis from the US intelligence community.

“The new assessment, which differs starkly from previous positive analysis, comes after the Taliban made battlefield gains in Afghanistan, including the seizure of a key district in northern Kunduz province this week. Taliban forces have also besieged Mazar-e-Sharif this week, capital of the (far northern) Balkh province.

“The latest intelligence assessment, reported by the Wall Street Journal, said that the Afghan government, led by President Aashraf Ghani, could collapse between six to 12 months after all American forces are pulled from the country.

“Some other officials, however, said that the government could fall as soon as three months after the US’s withdrawal from Afghanistan is finished, the Journal reported.”

As the withdrawal of US forces turns into a stampede, some damage limitation efforts are being made by the Pentagon to quell the panic, triggering some very garbled messaging.

“Pentagon press secretary John Kirby on Tuesday reiterated the department’s plans to withdraw all troops, other than the ones left to ‘protect the diplomatic presence’ by 11 September.

“He did, however, in response to questions about the Taliban’s gains, say the Pentagon wants to ‘maintain the flexibility’ to alter the pace, scope or scale of the withdrawal.

“‘It is a dynamic situation and we said from the outset that we’re going to treat it as such, in that the – that – if there need to be changes made to the pace or to the scope and scale of the retrograde on any given day or in any given week, we want to maintain the flexibility to do that,’ Kirby said at a press conference.

“The Pentagon, in an email to The Hill, said: ‘We have nothing to add.’” (Intel analysis: Afghan government could collapse six months after US troops withdraw by Michael Schnell, The Hill, 23 June 2021)

The US troop withdrawal now stands at 90 percent, with the rest expected to be gone by 31 August, ahead of the originally planned symbolic 11 September deadline. And as the US troops up sticks and move out, the Taliban-led resistance is relentlessly advancing, claiming to have liberated about 85 percent of the country.

Resistance forces are concentrating on securing border crossings into the surrounding countries, controlling crossings into Iran, Uzbekistan, Tajikistan and Turkmenistan.

Meanwhile, the demoralised mercenary Afghan soldiers, abruptly deserted by their colonial overlords, are fleeing for their lives, leaving behind all the weaponry so generously supplied by imperialism and now doubtless swelling the Taliban’s arsenal. According to the BBC, nearly 1,600 Afghan soldiers have fled into Tajikistan in the space of two weeks.

It will be remembered that once upon a time the Taliban islamist warlords were Washington’s golden boys, seen as the best hope of keeping other rival warlords sufficiently in check to allow imperialism to get on with the job of looting the region’s mineral resources, which was to be facilitated by the construction of pipelines. It was only when the Taliban chafed at onerous US conditions and began to assert its own agenda that Washington changed its tune, denouncing its former allies as ‘terrorists’, invading the country and setting up a puppet government and army.

Over the ensuing 20 years, the Taliban has emerged as the best organised anti-imperialist force in the country, making it the de facto spearhead of the resistance.

Russia’s response to the precipitate withdrawal of US troops from Afghanistan is necessarily ambivalent. Instability on the borders of Tajikistan, Uzbekistan and other former Soviet republics is unwelcome to Russia, especially given the west’s known predilection for exploiting islamist sentiment to fuel balkanising tendencies.

As well as fleeing Afghan troops pouring across the border into Tajikistan, there are also reports of Islamic State and Uyghur terrorists transferring from Syria to northern Afghanistan, not to mention Turkish president Recep Tayyip Erdogan’s declared intention of occupying Kabul airport when the US leaves, counter to the wishes of the Taliban.

And whilst the Taliban has done sterling work in delegitimising the Kabul regime and ousting the US military, there is no guarantee that its relations with the former Soviet republics will be similarly beneficial.

Threats to the integrity of the borders of any of the former Soviet republics would be tantamount to threats to the borders of Russia itself. That is why Russia has reacted to developments in Afghanistan by announcing joint military exercises with both Uzbek and Tajik forces.

The Uzbek drills will go ahead on the Termez training ground near the Afghan border, whilst in Tajikistan Russian and Tajik forces will practise pushing back “detachments of illegal armed formations that invade the territory”.

Tajikistan belongs to the Collective Security Treaty Organisation (CSTO), a mutual defence pact aimed at protecting the borders of six former Soviet republics (Uzbekistan was also a member but pulled out in 2012).

Tajikistan in particular has reason to be concerned about possible consequences, given its recent painful memories of the islamist-fuelled conflict that wracked the country from 1992-97. For five years, the so-called ‘Muslim Resurrection’ movement, backed up by anti-Soviet mujahideen in Afghanistan, led a rebellion against the communist government that plunged the country into a bloody civil war at the cost of thousands of lives.

So Russia is wary of what the Taliban’s victory might bring in its train. That said, Russia and China are both well placed to build progressively on that victory, to the benefit of the whole region.

While Moscow still rows in with the official designation of the Taliban as ‘terrorist’, it makes it clear that all this can change if intra-Afghan talks get traction. To assist in this, a Taliban delegation was invited to visit Moscow recently, in a departure from the usual travel ban.

Russian envoy to the United Nations Dmitry Polyanskiy suggested that existing UN resolutions opened the door to sanctions against the Taliban being dropped, given the right circumstances and progress in peace talks. He also talked about starting “a review of the status of designations of individuals, groups, undertakings and entities on the list”, – ie, dropping the ‘terrorist’ label. (Russia defends ongoing talks with Taliban, saying banned militant group is key part of plan to bring peace to war-torn Afghanistan, 19 July 2021)

The Shanghai Cooperation Organisation (SCO), comprising Russia, China and the former Soviet republics (aka the ‘Stans’), is ready and able to open avenues of development now that the baleful influence of the US is waning.

“Crucial to understanding the developments taking place in Eurasia are entities such as the Shanghai Cooperation Organisation, the Collective Security Treaty Organisation (CSTO), and the Eurasian Economic Union, as well as Chinese investment projects, most notably the Belt and Road initiative. Already, these are showing signs of playing a significant role in Afghanistan’s postwar environment.

“China has long sought to incorporate Afghanistan into Belt and Road as the missing link connecting the Eurasian supercontinent. In early July 2021, a Taliban spokesman openly referred to China as a friend, promising protection for Chinese investors coming to Afghanistan.

“Simultaneously, Taliban representatives met with Iranian officials in Tehran, where they reiterated the militant group’s commitment to a political settlement with the Kabul government, reassuring listeners elsewhere. Iran is already an observer at the SCO, and plans to grant full membership are still on the table.

“Meetings have already taken place in Tashkent, Uzbekistan and Dushanbe, Tajikistan to discuss closer cooperation, the Afghan peace process and regional security. In Dushanbe, the SCO-Afghanistan contact group held a special meeting at the foreign minister level regarding the facilitation of peace talks.” (As US troops are flown out of Afghanistan, the graveyard of great empires is now once again at the centre of a battle for Eurasia by Julian Fisher, RT, 20 July 2021)

In the 20 years that have elapsed since the US first occupied Afghanistan, the imperialists have succeeded in plunging one middle-eastern country after another into a bloody battlefield, but nowhere have achieved their war aims. Instead, every failed adventure has seen US reputation in the world fall further and further into contempt, whilst that of China and Russia has grown steadily.

The retreat from Afghanistan takes us full circle, but has pushed US imperialism further on a downward spiral from which there can be no return.