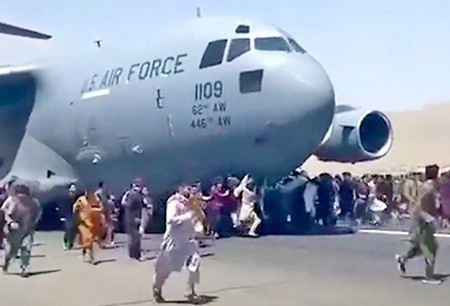 The last U.S. troops and planes flew out of Afghanistan Aug. 30, leaving the Taliban in control of the country. Two decades of war by the U.S. rulers and their allies left hundreds of thousands of Afghans killed or injured and millions displaced, as well as some 2,500 U.S. soldiers killed. The U.S. war created worse conditions for workers and farmers to fight for their interests against the capitalists and landlords who exploit them.

Some 7,000 U.S. and British troops occupied Kabul’s airport to cover a hurried flight from the country. An Islamic State suicide bomber killed at least 169 Afghan civilians and 13 U.S. troops outside the airport Aug. 26. Three days later U.S. forces unleashed a retaliatory drone strike in Kabul, which killed a civilian family of 10 nearby. Showing the U.S. rulers’ contempt for the Afghan people, Joint Chief of Staffs Chair Gen. Mark Milley called the attack “righteous.”

Demonstrations by opponents of the Taliban’s rule have broken out, including by women’s groups demanding rights trampled under during the Taliban’s previous despotic rule. They’ve faced attacks by Taliban forces.

The Taliban government rules over a war-battered economy deprived of most overseas financing. Food prices are rising sharply.

RAWA Responds to the Taliban Takeover