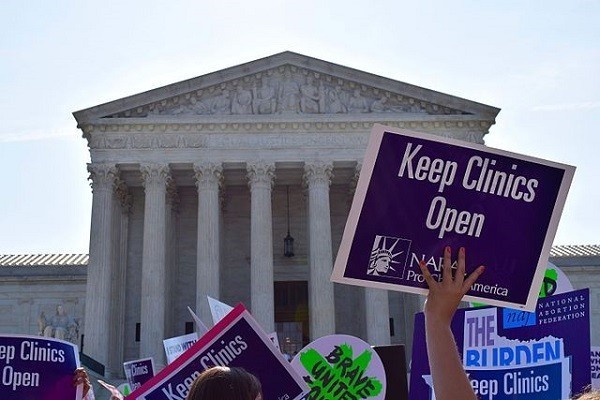 The Texas ban on abortion has just now been put on hold by a Texas judge, temporarily blocking its implementation by granting a request by the Biden administration to prevent any enforcement of the law while its legality is being challenged. But this was just a pause. Almost immediately, Texan state officials appealed against the ruling.

The court battle is not simply about the legal texts. Fundamentally if there is sufficient opposition then the judges can retreat out of fear of being seen to oppose the popular mood. That would show that it is possible for a struggle to win victories alongside defending women’s rights. If nevertheless, the legal system eventually supports this law, such a ruling decision can play an important role in building support for a party of Labour that will challenge the semi-democratic and pro-rich US system supported by both the Republicans and Democrats.

Texas’s abortion law, which went into effect on 31 August, bans abortions after six weeks—before most women even know they’re pregnant. In fact, 90% of abortions in Texas happen after the 6-week mark. It also offers $10,000 to any person who successfully sues either an abortion provider or anyone involved in facilitating an abortion, even including taxi drivers who take patients to the clinic. The law relies on private citizens to act as vigilantes to avoid previous issues where anti-abortion laws were blocked by lawsuits brought against public officials. This law is a serious attack on women’s and LGBTQ rights and must be opposed. Yet it is clear from the inaction of the Supreme Court that relying on the judicial system to challenge this law will not work.

Working people were told that electing Biden would be the only way to protect abortion rights, despite Biden’s previous support for the Hyde amendment which bans federally funded programs from paying for or subsidizing abortions. In 1981, Biden supported a constitutional amendment that would allow states to overturn Roe v. Wade. Abortion rights have been eroded under Republican and Democratic Party regimes alike. Under Bush, Obama and Trump, access to abortion clinics drastically declined across the U.S., with a record 205 abortion restrictions passed by states between 2011 and 2013. None of these administrations made a serious attempt to counteract these trends.

The Supreme Court is not a democratic institution; voters have no say in who is appointed and appointees have no one to answer to once they are in power. The capitalist system relies on undemocratic institutions like the Supreme Court to maintain control while giving working people the impression that they have a say. But by design, working people lack accountability, decision-making, and control over capitalist governments.

Some activists mistakenly believe that going through the entire judicial system is the best way to fight laws like the Texas abortion ban, but only a mass movement of working people can defeat the Texas abortion ban and countless other restrictive laws against abortion. Roe v. Wade was decided in the early 1970s in the context of a militant women’s struggle arising out of other mass movements of the time, such as the movement against the Vietnam War, the civil rights movement, and movements for environmental protection. These historic movements and the victories they achieved demonstrate that what matters is ultimately not who is on the Supreme Court, but the degree to which working people are organized and can pressure the capitalist class to meet our demands.

Abortion providers have already started complying with the law and many clinics will likely close without enough patients. The whole state of Texas is over two times the area of the United Kingdom and has only 24 abortion clinics. Even before this law went into effect, the right to abortion was restricted, not just in Texas, but across the country. Private abortion clinics did not mean definite accessibility to abortion because clinics charge hundreds or thousands of dollars and operate as a business. Abortion is technically legal but for many women, especially in the South and Mid-West, abortion is not accessible due to cost and lack of facilities. Working women without transportation, without insurance that would cover reproductive care, and without the time or money to get an abortion effectively do not have access to abortion. This law will force more people to seek out “do-it-yourself”  abortions, which means more deaths, price gouging, and an unregulated black market.

The fight for women’s rights does not just include lifting legal restrictions on abortion. We must also fight for free, universal health care with guaranteed reproductive health coverage and family planning services, higher-paying jobs with paid time off, free public and affordable housing, equal pay through expanding union membership and democratizing unions, free mass public transportation, guaranteed paid parental leave, fully-funded and free childcare, and so much more. The fight for women’s rights is the fight for socialism, where the majority of society has control over the economy and political system, so we can ensure that everyone’s needs are met. Unions, women’s and LGBTQ rights groups, socialists, and other activist groups must mobilize for marches, protests, occupations, and strikes to repeal repressive anti-abortion laws.

The Independent Socialist Group calls for: