Last August, the brutal police shooting of Jacob Blake, an unarmed Black man, reignited the flames of the Black Lives Matter movement in the small town of Kenosha, Wisconsin. Thousands came out against racism and police terror as protests again spread, first to Milwaukee, Chicago, and then to major cities from coast to coast.

On the third day of demonstrations in Kenosha, as the crowd waned and the bulk of protesters headed home, 17-year-old far-right wannabe cop Kyle Rittenhouse shot three people with a semi-automatic rifle, killing two and seriously injuring another.

Today, after two weeks of trial and more than three days of deliberation by the jury, Rittenhouse has been found not guilty on all counts. This represents another stark confirmation that there can be no real justice under capitalism, a system based on exploitation, oppression, and racism.

The 2020 BLM protests struck fear in the hearts of the ruling class and sent Trump scurrying into his underground bunker. However, in the absence of a clear revolutionary program and leadership, the movement was co-opted by the Democrats and, after phony promises of “police reform,” driven back into safe channels for the system. Now, a number of high-profile trials—including the ongoing case against Ahmaud Abery’s killers—are being carried out to offer the semblance of “justice” in courtrooms far from the heat of last year’s insurrectionary mass movement.

The guilty verdict in the trial of George Floyd’s killer, officer Derek Chauvin, showed that the ruling class needed to scapegoat an enforcer of their system for fear of sparking a new movement. A few months later, things have gone back to “normal,” as a racist teenage murderer is let off scot-free.

During his trial, Rittenhouse cried crocodile tears in the courtroom as the lawyer painted the picture of a young boy full of remorse who acted strictly in fearful self-defense. From the beginning, the judge showed his partiality to these claims and a clear double standard. He did not allow prosecutors to refer to the victims, Joseph Rosenbaum, Anthony Huber, and Gaige Grosskreutz, as “victims”—but allowed the defense to call them “rioters,” “looters,” and “arsonists.”

Never mind that Rittenhouse drove across state lines from Antioch, Illinois to Kenosha following a call to arms by far-right groups on social media, illegally wielding a rifle that a friend bought for him. The far right has rallied in support of Rittenhouse, raising $2 million for his bail and defense. His ties to the Proud Boys were made abundantly clear on January 2021, after Rittenhouse posted a photo at a bar with leaders of the Wisconsin chapter flashing a white supremacist “OK” hand gesture. Yet the judge denied admission of evidence of any connection between Rittenhouse and the extreme-right group, and dismissed a firearm possession charge on a linguistic technicality. 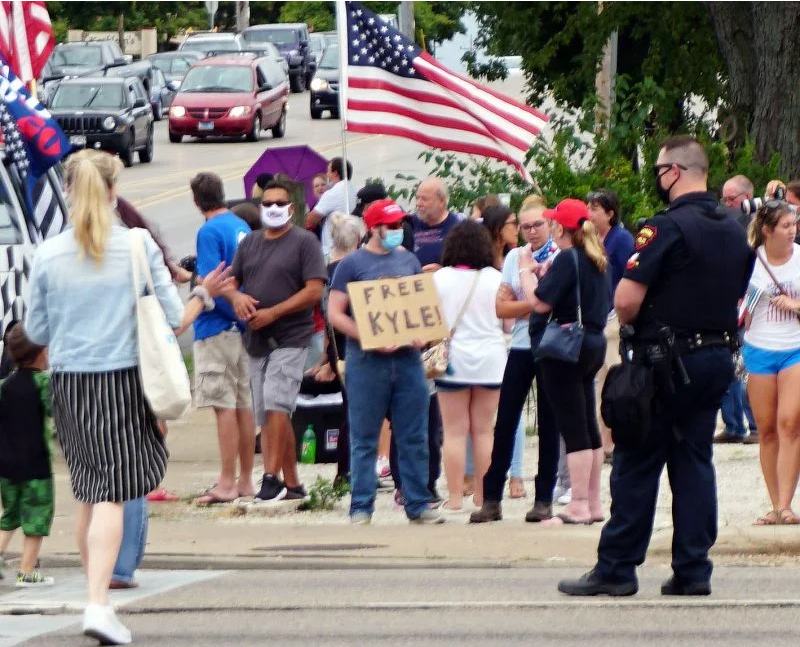 Notably, Rittenhouse was not injured or killed during his arrest after he fired his weapon. Even though he had just shot three people in plain sight, he was ignored by dozens of cops at the protest and was allowed to drive back to his home in Illinois before turning himself in at a local police station. In stark contrast, Tamir Rice, Daunte Wright, Michael Brown, and countless other Black teenagers are summarily executed by police despite being unarmed. This difference in treatment is systematic: police shot Black adolescents at six times the rate of their white counterparts between 2003 and 2018.

As for the officer who shot Jacob Blake seven times in the back in front of his young children, paralyzing him from the waist down—no charges have been pressed whatsoever. Rittenhouse’s defense alluded to the subjectivity of the court, saying, “Other people in this community have shot somebody seven times and it’s been found to be OK.” This begs the question: why are the police considered to be above the law and the rest of society, not held accountable to the same laws we’re told they enforce? The court system exists to enforce the laws of an inherently violent, exploitative, racist system and therefore does not address those types of questions.

As we have explained elsewhere, the real purpose of the police is first and foremost to protect private ownership of the means of production and defend the capitalist order. Crowd control and repression of mass movements have historically been a major function of the police. In normal times, this is not difficult, especially in cities like New York, where the police department’s budget outranks nearly 100 countries’ military budgets. But the George Floyd movement was anything but normal. Throughout last summer, one in ten Americans participated directly in the protests at some point. This was a genuine mass movement which the state’s armed forces could not have contained based on repression alone.

At the same time, the movement had a polarizing effect, pushing people both to the left and to the right. This polarization was not balanced equally, however. There was majority approval and support for BLM across the country, even though those who view police as “heroes” were given equal airtime. Spurred on by Trump’s repeated calls for “law and order,” small groups of far-right vigilantes took matters into their own hands to “protect” businesses and assist the police. In an interview at the protest, Rittenhouse claimed it was his job to “protect people”—shortly before killing Joseph Rosenbaum or Anthony Huber. 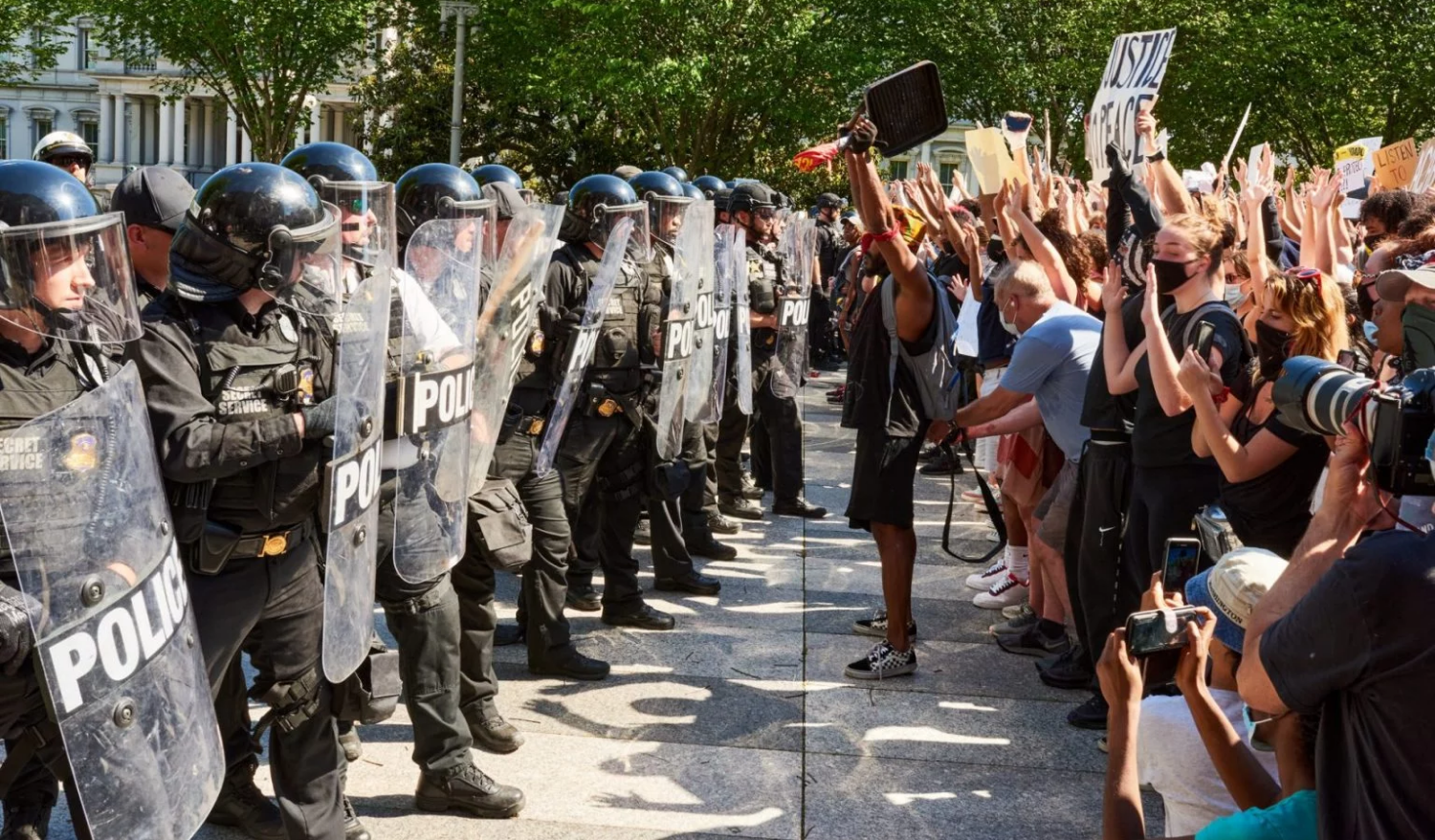 The 2020 BLM protests were a truly mass movement which the armed forces of the state could not have contained on the basis of repression alone / Image: Geoff Livingston, Flickr

At the time of the Jacob Blake protests, the George Floyd movement had begun to lose steam. Protests were less frequent and smaller, as Democrats combined the stick of repression with the carrot of symbolic gestures to try to lull the masses into complacency. It is only in this context, once the Kenosha protests had died down, that the presence of armed civilians dressed in camouflage with ammo strapped to their chests had any impact. To be sure, these armed vigilantes had nothing in common with the neighborhood committees and patrols that sprung up in Minneapolis to defend working-class neighborhoods. People like Rittenhouse were there to “lend a hand” to police maintaining “order” and protecting private property. While the neighborhood patrols in Minneapolis were cautioned against breaking curfew, the armed men in Kenosha received bottled water and fist-bumps from cops passing by.

Today’s verdict confirms that we cannot rely on capitalist institutions to bring justice to the victims of racist violence or to combat the far right. The verdict will make the blood of millions boil in anger, and many of them will want to “do something” to avenge the deaths of the victims. However, the best way to prepare for confrontations like Kenosha is not to respond to a handful of armed rightwingers with a handful of armed leftists. The power of the working class is a function of its overwhelming numbers, its productive role in society, and its ability to bring society to a standstill if it organizes and mobilizes independently as a class.

Just as on January 6, the growth in the far right is part of the distorted polarization in society. But these events show that the minority of active rightwingers stand no chance against the full might of the organized working class, a glimpse of which we saw in the multi-millioned ranks of the BLM movement at its height.

To prevent racist police and far-right violence, an organized, revolutionary leadership must be prepared in advance, equipped with the correct tactics and with experience in the movement, to help channel the struggle against racism and capitalist exploitation into a real power for the transformation of society. Only then will we be able to rid ourselves of capitalist institutions such as the police and racism—the only real way to bring justice and honor the memory of the victims of this system.