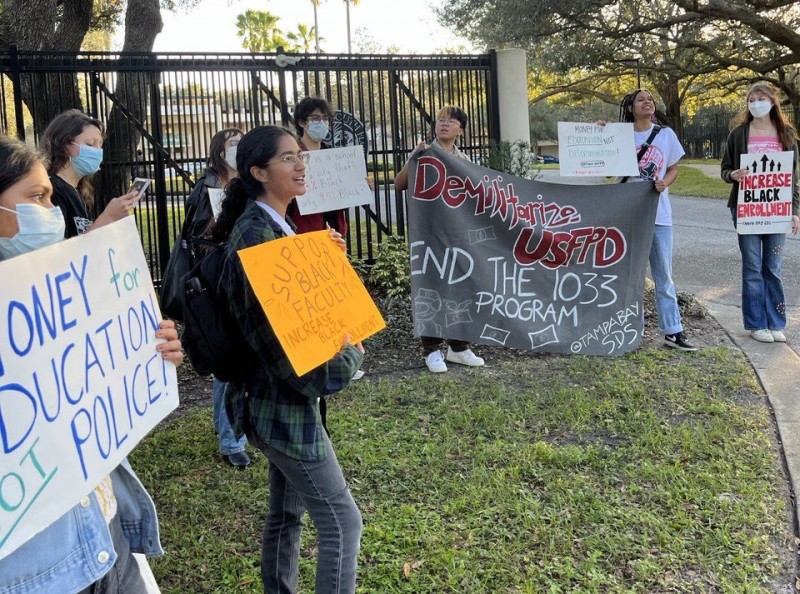 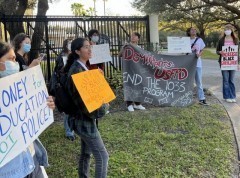 On Thursday, December 1, Tampa Bay Students for a Democratic Society (SDS) led a march to the president of the University of South Florida’s mansion to protest the university’s low Black student enrollment. The students also called for the University of South Florida (USF) police department to cancel its participation in the 1033 Program, which allows police to buy decommissioned military weapons from the Department of Defense, and students say the police department should return the equipment it received from the program.

This march came a few days after a call-in campaign in which the university president refused to meet with students to discuss these demands.

“Our tuition money pays for her salary and this mansion, yet Rhea Law won’t meet with us and has the police threaten us!” said Victoria Hinkley of Tampa Bay SDS, who was leading the march.

Outside the gates of the president’s mansion, Tampa Bay SDS continued their protest as donors and university staff arrived at the fundraiser. Rhea Law is USF’s third president since Tampa Bay SDS started raising concerns about USF’s declining Black student enrollment. Previous president, Steven Currall, conceded to some demands in Fall 2020 and stated that the university would put more resources toward increasing Black enrollment. However, Black student enrollment has continued to decline.

“Nobody is holding the school accountable,” said Gareth Dawkins of Tampa Bay SDS. “That’s why we have to keep protesting, otherwise USF would gladly leave Black students behind.”

University Police Chief Chris Daniels, who has an active racial and gender discrimination lawsuit against him, attempted to tell the protesters that the police department already pulled out of the 1033 program and sent back the assault rifles obtained through it in 2010. However, in multiple interviews and press releases since 2010, the university police department references being part of the 1033 program. This includes an interview from summer 2020 in which Daniels says the department would never leave the 1033 program or return the weapons obtained through it.

“The police wants us to trust them, but it’s impossible when they lie to our face,” said Dawkins. “We’re demanding that the police make information about their budget and arsenal completely open to the public.”

After an hour of speeches, chanting and garnering support from fellow students and staff, Tampa Bay SDS marched away from the president’s mansion committed to continuing their campaign to increase Black enrollment at USF and demilitarize the university police.

Opinion | The embarrassingly banal fall of a university president