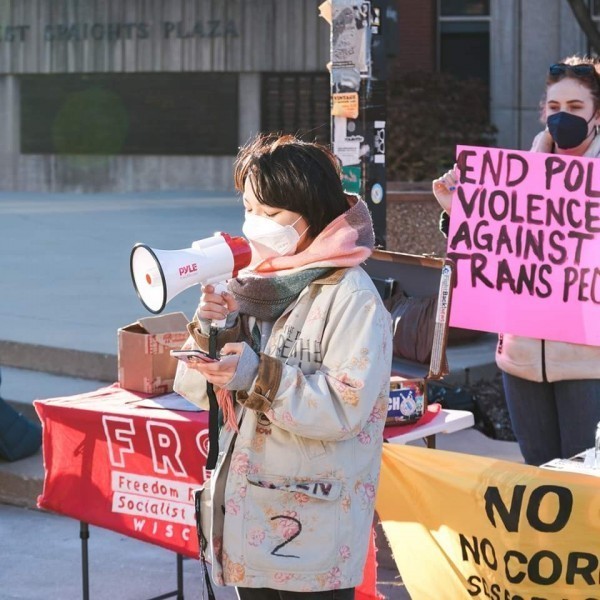 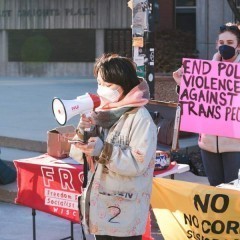 Patricia Fish, a leader with UWM SDS, speaks at a rally to end violence against trans people, from the police or otherwise.
(Fight Back! News/staff)

Milwaukee, WI – On November 21, a dozen members from Students for a Democratic Society (SDS) at UW-Milwaukee and Freedom Road Socialist Organization (FRSO) gathered in Spaights Plaza at UWM to condemn transphobic violence and to advocate for a hiring freeze on UWM’s police department. A moment of silence was also observed to honor the victims of the Club Q shooting in Colorado that occurred two days before the event.

Speeches condemned the increase in anti-LGBTQ+ bigotry that has occurred in recent years, the erasure and criminalization of trans people, and advocated for UWM Police Department funding to be redirected into mental health services, the LGBTQ+ resource center, and other services that are equipped to serve trans folks.

“Men worked and got just enough wage to support the family, women kept the home and raised the next generation of workers. Anything outside of that needed to be crushed,” said Nadezhda Young Binter of FRSO, referring to the capitalist construction of the “nuclear family” and the rigid and oppressive gender binary that serves as the basis of queer and trans oppression.

Young Binter and Trenton Houck of SDS also talked about how police violence has always disproportionately impacted trans people, especially oppressed nationality trans people – from enforcing laws prohibiting cross-dressing and homosexuality in the 1950s to present day where parents who allow their transgender children to live as their authentic selves are being investigated for child abuse in Texas, denying prisoners access to gender affirming care, and more.

UWM PD mainly handles drug and alcohol violations but also conducts mental health check-ins and intervenes in sexual violence cases – all things they should not be doing. Due to the stigma and discrimination that our violently transphobic capitalist society perpetuates, trans people are more likely to experience depression, anxiety, substance use disorders and suicidal thoughts than others. Trans people are less likely to trust police with situations like these because they face a higher risk of being brutalized than cis people, and police presence in these situations only escalates them and results in more trauma for those involved. 25% of people killed by police in 2015 were having a mental health crisis, and even UWM PD has a history of brutalizing mentally ill people. In 2019, a homeless person having a mental health crisis was shot by UWM PD.

Transgender people also face sexual violence at much higher rates than others and oppressed nationalities are even more impacted. Most sexual assault cases go unreported due to survivor distrust in the police. UWM’s police department currently has 41 officers while the LGBTQ+ resource center currently only has two full-time staff members. Other student support services are also severely understaffed.

“How are these understaffed departments supposed to adequately serve a student population of over 20,000 people?” Houck asked in their speech, to which the crowd responded, “They can’t!”

In order to limit police violence against trans people and to create a safe and inclusive campus where trans people are given adequate resources and support, police funding must be redistributed to student support services like the LGBTQ+ center and mental health services.

Appleton, WI: SDS rallies for $15 an hour for students on campus

Keishon Thomas died in Milwaukee police custody. They’re not telling us what happened