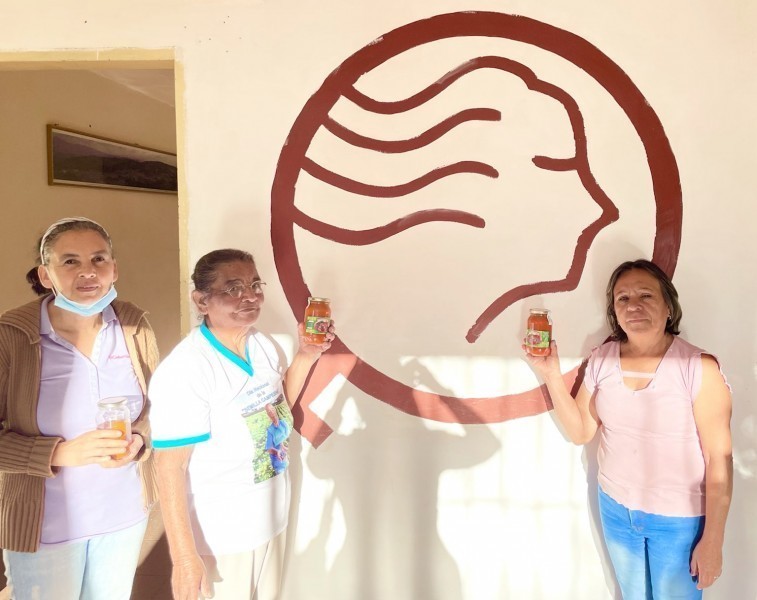 In the mountains of Monte Carmelo, all women’s food production collective members proudly display their wares.
(Fight Back! News/staff)

Paez, Venezuela – Groups of mainly women stand with pride in front of Manuelita Saenz Bolivarian School and Community Center. The new center and school provide classes on music, culture, politics, feminism, sports, etc. Children and adults from all over the neighborhood attend to open their minds and improve their education.

“We are a vanguard. We started workshops on politics, religion, feminism, cooking and much more,” says Adelheidh Salcedo, teacher at the Manuelita Saenz Bolivarian School and Center.

In Venezuela, the communes – community organizations – have the power to choose what projects need to be funded for their communities. Over 47,000 commune councils are registered with the Venezuelan government. They write proposals to the Maduro-led government, then the government provides resources and guidance to support them. These projects are seen all over Venezuela, with communes choosing to build new housing, such as the 93 apartment building built in the community of Antimano, Caracas. Others chose to construct community food gardens, schools, playgrounds, or to meet other needs.

The community members of Paez contacted the government about an abandoned building that they wanted to use to start a new school and community center. The government approved the project, and the group, led by over 75% women, hit the ground running to build the Manuelita Saenz Bolivarian School and Center.

“The Paez community organized everything, with rehabbing the building, finding teachers and planning extensive curriculum. The governor also helped us with supplies, painting and rehabilitation. There is a lot of participation from everyone. Women are critical for our revolution here in Venezuela,” says Karla Mogollon Lucena, Paez community organizer.

In the rural mountains of Monte Carmelo, the community chose to develop a center that includes all women’s food production, workshops and community meetings. The food production collective used local farming to make pasta sauce and sweets. All the ingredients were locally harvested by the local garden and sold to nearby regions. They proudly display their jars that contain a symbol of a woman with flowing hair.

“Not only, do we garden and make our own food, but we hold feminist workshops. We invite women from all over to share their expertise and experiences with us. Some are feminist experts at giving women a voice, others share with us how to do mechanic and fix cars, others tell us ways to improving vegetable gardening. We learn a lot from women from all over Venezuela. Women are most of the ones who lead these workshops. Women are warriors and leaders in the revolution,” said Gaudy Garcia, a leader of the Family and Gender Equity Committee of the Monte Carmelo Commune.

The Systemic Commune Laws, which started under the President Chavez’ government, include 77 articles on how the commune councils are elected, how they make decisions, their popular participation in the economics and production in their communities, their function and duties of serving their community, ideas of possible projects, how to promote justice and equal rights for all genders and members, respect social traditions and cultures, and provide workshops on social justice.

“There is a lot of machismo and sexist culture in Latin America. From our feminist classes, I learned how to stand up for myself and tell my husband that he needs to do half the cooking and cleaning. It shouldn’t all fall on the woman. In most of Latin America, women do all of the cooking and cleaning,” said Maria Rodriguez, a community member of the Family and Gender Equity Committee of the Monte Carmelo Commune.

When starting the Systemic Commune Law, Chavez said, “Commune or nothing.”

These communes have been key to political education, building up the communities, increasing the resources and supporting local production. Communes are seen in every part of the country, from the rural areas, small towns to large cities.

“We make a lot of our own materials for our school and use recycled materials too. We work hard and are passionate about improving our community. We are a rural area, but we make sure the kids are educated well. We also teach about sexism in the language and how often society uses male dominant language, we want to change that. Us women are the political leaders here. We celebrate women because we are feminists,” says Maribel, community leader of Monte Carmelo.

The communes have been an effective way to build local leadership, promote collaboration among workers, and improve the economy. Every commune our staff visited tells us about how their commune is helping lead the revolution to improve the lives of the people and promote the people’s democracy.

“We have won national and international awards for our innovation and achievements,” says Gaudy Garcia.