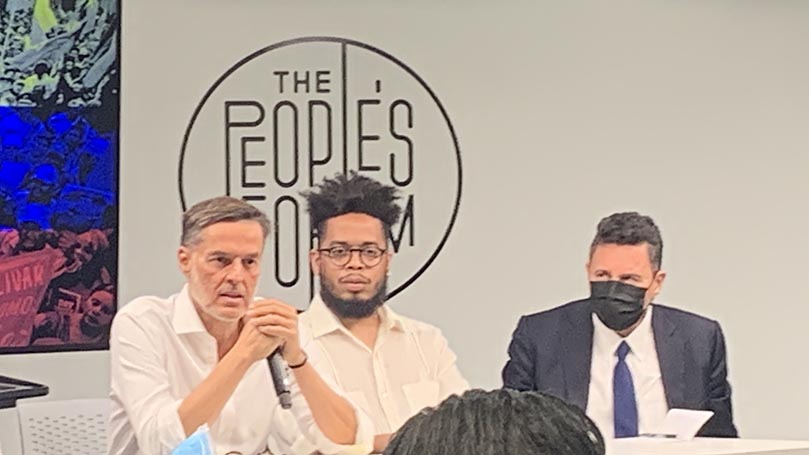 Last week the People’s Forum in New York City hosted Félix Plasencia, Venezuela’s new foreign minister, who was in town for the United Nations’ 76th session of the General Assembly. In attendance were leftist and progressive activists ranging from Bahman Azad of the U.S. Peace Council to Medea Benjamin of CodePink. The NY Young Communist League’s co-chairwoman, Justine Medina, along with the Communist Party’s Maicol Lynch were also in attendance.

Félix Plasencia’s speech began with apologies for arriving a few minutes late due to the ongoing bilateral conversations he was having at the UN headquarters a few blocks away. “As many of you can imagine, many delegations wish to meet with us to understand what’s happening in Venezuela. And other delegations which think they understand what’s happening in Venezuela must meet with us because they have the wrong idea completely.”

Plasencia and the Venezuelan delegation expressed concern for all of the poverty they saw in the streets of New York and reiterated that Venezuela, “only wishes the best for the United States and its people. While the Trump and Biden administrations may look for us to be the enemy, we want to make it clear that we are not your enemy. We respect your election results and we ask that your government respect ours.”

Amid the rumors circulating over the past two-and-a-half years regarding the failed coup that took place in April of 2019, Plasencia commented, “We have been able to survive everything that the United States throws at us. The Venezuelan people have not bent a knee to the imperialist siege.” When asked about the complex issue regarding immigration to and from Venezuela as a result of the economic crisis and the ongoing political tension in neighboring Colombia, the foreign minister replied, “We do not refer to Colombian people living in our country as ‘immigrants.’ We refer to them as ‘Venezuelans of Colombian origin.’ That’s how we see them. After all, we were once part of the same country founded by Simon Bolivar two centuries ago.”

The speech given by the Venezuelan delegation at the People’s Forum reiterated Venezuela’s hope for peace as well as their perseverance even in the most trying of times. In addition to the solidarity from fellow socialist governments in Latin America such as those of Bolivia, Cuba, and Nicaragua, the foreign minister asked that the radical left educate American workers about the situation in Venezuela so that a stronger and more unified anti-war and anti-sanctions movement can be built in this country and beyond.

‘We have lost everything’