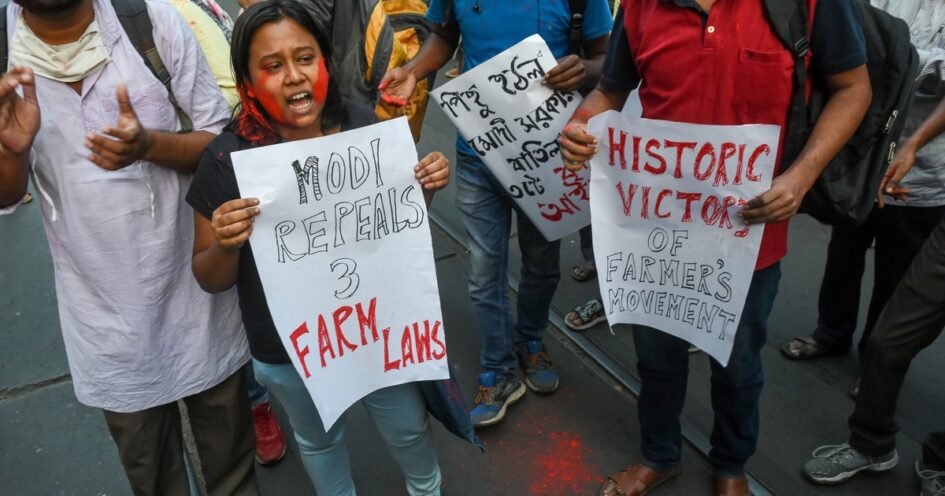 Workers’ rights activists around the globe rejoiced on Friday after Indian Prime Minister Narendra Modi announced that his government will repeal three corporate-friendly agricultural laws that the nation’s farmers have steadfastly resisted for more than a year.

“We will wait for the day when the farm laws are repealed in Parliament.”

The Samyukta Kisan Morcha (SKM), a coalition of over 40 farmers’ unions that led the protests, called the development a “historic victory” for those “who struggled resolutely, unitedly, continuously, and peacefully for one year so far in the historic farmers’ struggle,” India Today reported, citing a statement from SKM.

“Prime Minister Narendra Modi’s announcement to repeal three farm laws is a welcome step in the right direction,” said SKM, though the organized labor coalition did not commit to ending its mobilization. “SKM hopes that the government of India will go the full length to fulfill all the legitimate demands of protesting farmers, including statutory legislation to guarantee a remunerative MSP [Minimum Support Price].”

Rakesh Tikait, a leader of the Bharatiya Kisan Union, welcomed Modi’s announcement but said that “we will wait for the day when the farm laws are repealed in Parliament,” where the winter session starts on November 29. He added that in addition to the MSP demand, “the government should talk to farmers on other issues.”

Al Jazeera reported that Modi’s “sudden concession comes ahead of elections early next year in Uttar Pradesh, India’s most populous state, and two other northern states with large rural populations.” Opposition parties attributed the prime minister’s move to sinking poll numbers, characterizing it as part of an effort to appeal to voters who support or sympathize with the nation’s struggling farmers.

According to CNN, “Farmers are the biggest voting bloc in the country, and the agricultural sector sustains about 58% of India’s 1.3 billion citizens. Angering farmers could see Modi lose a sizable number of votes.”

“The repeal of the three farm laws… is a major political victory for India’s peasant movement.”

As India Today noted, “Hundreds of farmers have been camping at three places on the Delhi border since November 2020, demanding the repeal of the Farmers’ Produce Trade and Commerce (Promotion and Facilitation) Act, 2020; Farmers’ (Empowerment and Protection) Agreement on Price Assurance and Farm Services Act, 2020; and the Essential Commodities (Amendment) Act, 2020.”

For over a year, CNN reported, “Indian farmers have fought the three laws, which they said leave them open to exploitation by large corporations and could destroy their livelihoods.”

Al Jazeera explained that “the legislation the farmers object to,” passed last September, “deregulates the sector, allowing farmers to sell produce to buyers beyond government-regulated wholesale markets, where growers are assured of a minimum price.”

Modi’s cabinet said the laws are “aimed at giving farmers the freedom to sell directly to institutional buyers such as big trading houses, large retailers, and food processors,” Reuters reported. While Modi claimed the legislation “will ‘unshackle’ millions of farmers and help them get better prices,” opposition parties said that “farmers’ bargaining power will be diminished.”

Small farmers expressed alarm about the legislation, saying that “the changes make them vulnerable to competition from big business, and that they could eventually lose price support for staples such as wheat and rice,” Al Jazeera reported.

Beginning last September, farmers from regions of India that are major producers of wheat and rice blocked railway tracks, which was followed by larger, nationwide protests, including some that used trucks, tractors, and combine harvesters to block highways leading to New Dehli, the nation’s capital.

By last December, “protests spread across India, as farm organizations call[ed] for a nationwide strike after inconclusive talks with the government,” Reuters reported, adding that demonstrations also took place throughout the Sikh diaspora.

In January, “India’s Supreme Court order[ed] an indefinite stay on the implementation of the new agricultural laws, saying it wanted to protect farmers and would hear their objections,” the news outlet noted.

Over the course of several months, which included a brutal winter and a devastating Covid-19 surge, farmers continued to agitate for full repeal of the three laws. Repression from Modi’s right-wing Hindu nationalist Bharatiya Janata Party resulted in hundreds of deaths.

At the largest rally to date, more than half a million farmers gathered in Uttar Pradesh on September 5, roughly 10 weeks before Modi announced that he will repeal the laws.

In response to Modi’s decision on Friday, “farmers at [the] protest sites of Ghazipur, Tikri, and Singhu borders celebrated by bursting crackers, distributing sweets, and welcoming the [government’s] move,” India Today reported.

The Transnational Institute praised “the resilience, courage, and determination of India’s farmers who succeeded in overturning the pernicious farm laws,” calling it “the power of movements.”

That sentiment was shared by numerous other observers.

“The repeal of the three farm laws—unconstitutional, with no demonstrable benefits, and aimed to expand corporate control over agriculture—is a major political victory for India’s peasant movement,” said R. Ramakumar, an economics professor in the School of Development Studies at the Tata Institute of Social Sciences in Mumbai. “Their resolute struggle has shown and amplified the power of dissent in our democracy.”

Priyamvada Gopal, a professor of postcolonial studies at the University of Cambridge, placed the overturning of Modi’s unpopular reforms in a broader context, arguing that “the victory of farmers in North India is not a local matter.”

“This is a victory of global significance,” she added. “Immense class and oppressed caste solidarity, fierce determination, [and] deep courage defeated the combine of chauvinist authoritarianism and corporate greed—our common enemy.”

The Significance of Occupy