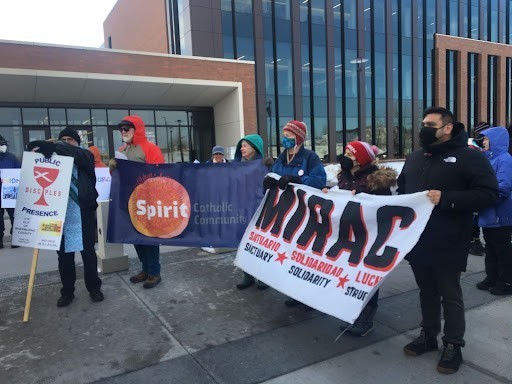 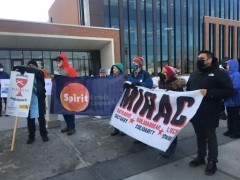 Elk River, MN – On the morning of March 8, around 50 people gathered at the Sherburne County Sheriff’s Office to demand that the county cut ties with Immigration and Customs Enforcement (ICE). The rally was organized by Sanctuary and Resistance to Injustice (SARI) and was supported by Interfaith Coalition on Immigration (ICOM), the Minnesota Immigrant Rights Action Committee (MIRAC), Filipinx for Immigrant Rights and Racial Justice Minnesota (FIRM), and various other groups who were all in attendance.

SARI has been organizing in the Elk River area for the past five years, and over this time the Sherburne County Sheriff’s Office and Sherburne County board have contracted with ICE to provide bed space for immigrant detainees in their jail. Sherburne County Jail, located about 30 miles northwest of Minneapolis, is the largest immigration detention center in Minnesota. On any single day the jail can hold as many as 300 ICE detainees. Sherburne County receives $100 per detainee for an annual revenue of as much as $11 million per year.

A letter, signed by more than 100 organizations throughout the state, was given to the board asking that Sherburne County immediately end their contract with ICE to house immigrant detainees. Tuesday morning’s action was planned in support of SARI members who went into the county’s board meeting and spoke during their public comment time, demanding the county cut ties with ICE.

Speakers at the rally outside the government center included Nancy Hassett, leader in SARI; the bishop of the Episcopal Church of MN; the conference leader of the United Church of Christ; the head of the MN Council of Churches, and the pastor of First Disciples of Christ.

Several people also spoke who have either recently been detained themselves or had family members detained in Sherburne County, and they shared stories of the horrible conditions inside the detention center and various examples of how the detainees are mistreated and abused. One speaker shared a story with the crowd about vomit and feces on the walls and floors of the cells and how when a detainee offered to clean it up himself, he was ordered not to and told, “There is a reason that it is this way.”

Along with speeches, the vigil included songs, chants and a short march. Protesters could be heard singing and chanting: “ICE out now!” as the group marched around the government center to the area of the building closest to the jail where a number of detainees are currently being held. There, the group sang and chanted in support of the detainees, with the goal that those inside could hear. The action ended with a march back to the front of the building and to the side of the highway to hold signs and banners to get the support of passing traffic.