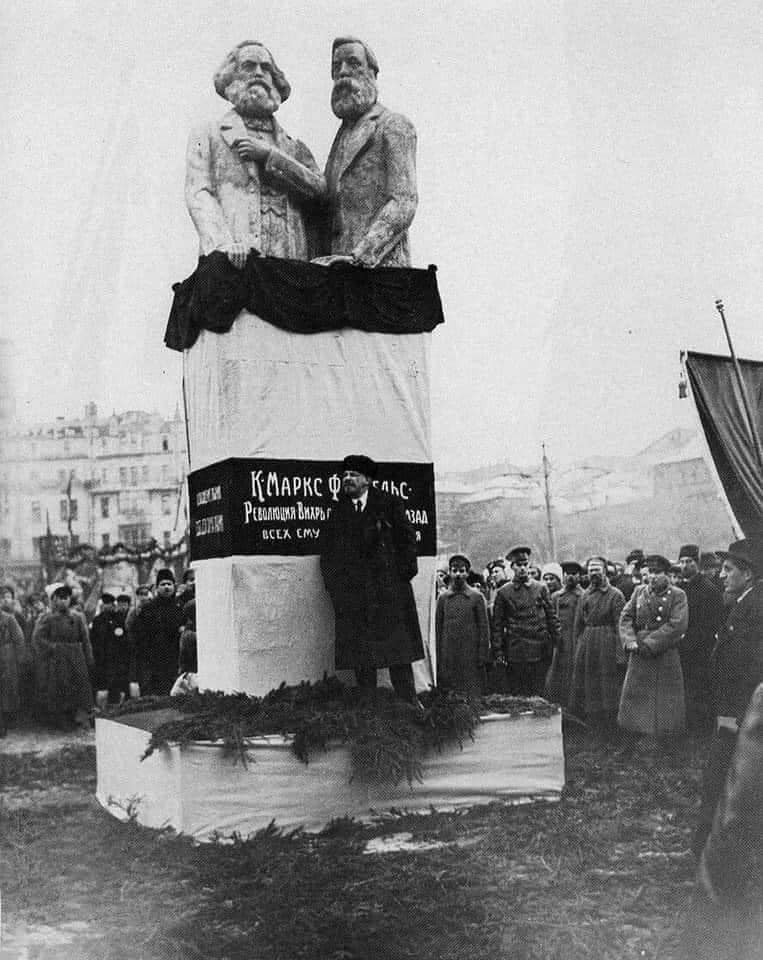 We are unveiling a memorial to Marx and Engels, the leaders of the world workers’ revolution.

Humanity has for ages suffered and languished under the oppression of a tiny handful of exploiters who maltreated millions of laborers. But whereas the exploiters of an earlier period, the landowners, robbed and maltreated the peasant serfs, who were disunited, scattered and ignorant, the exploiters of the new period, the capitalists, came face to face with the vanguard of the downtrodden people, the urban, factory, industrial workers. They were united by the factory, they were enlightened by urban life, they were steeled by the common strike struggle and by revolutionary action.

It is to the great historic merit of Marx and Engels that they proved by scientific analysis the inevitability of capitalism’s collapse and its transition to communism, under which there will be no more exploitation of man by man.

It is to the great historic merit of Marx and Engels that they indicated to the workers of the world their role, their task, their mission, namely, to be the first to rise in the revolutionary struggle against capital and to rally around themselves in this struggle all working and exploited people.

We are living at a wonderful time, when this prophecy of the great socialists is beginning to be realized. We all see the dawn of the world socialist revolution of the proletariat breaking in several countries. The unspeakable horrors of the imperialist butchery of nations are everywhere evoking a heroic upsurge of the oppressed and multiplying their strength in the struggle for emancipation.

Let this memorial to Marx and Engels again and again remind the millions of workers and peasants that we are not alone in our struggle. Side by side with us the workers of more advanced countries are rising. Hard battles still lie ahead of them and us. In common struggle capitalist oppression will be broken, and socialism finally won!

Lenin on Imperialism (Part 1): A Policy or a System?

Lenin and Krupskaya in Paris

Lenin talks about the October revolution