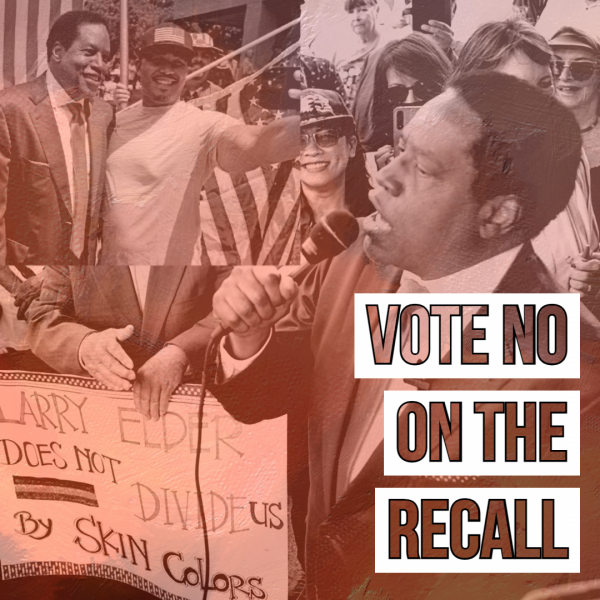 Los Angeles, CA – Right-wingers, racists and proponents of anti-COVID-19 measures are leading a recall election of Governor Gavin Newson. California voters will vote Yes or No on the recall and also pick who they would prefer if the recall is successful. The last day to decide is on election day, September 14.

Larry Elder, a South Central Los Angeles native who is known for his racist, elitist, sexist and homo-phobic statements, is Newson’s main threat. Elder graduated from Crenshaw High School in 1970, five years after the Watts uprisings, and at a time when the Los Angeles Police Department was once again under heavy public scrutiny. Elder is a huge Donald Trump fan and believes that racism does not exist. Among his ridiculous statements are that he fully believes in reparations, but for the descendants of the white slave owners and farmers who during slavery “lost their property,” and that the minimum hourly wage should be decreased to $0.

The COVID-19 pandemic has further divided people into two categories – those who believe measures to protect against COVID-19 must remain in place or increase, and those who believe the opposite. The recall election has a lot to do with the pandemic which began in the spring of 2020. But if Newsom is successfully recalled, and if contender Elder is elected, the Democrats will lose their longstanding hold of California.

Sometimes the enemy can look like us, like in Elder’s case. And sometimes Chicanas like us have to come out in favor of people who don’t look like us, like in Newsom’s case. The fight is also much more than about Newsom, it is also about the safety and future of the population of California – both voters and nonvoters. If Newsom loses, the Democrats lose, and California will return to being in the stronghold of racists and anti-working class people like Elder and his supporters. This cannot happen, and therefore if you can vote in California, be sure to vote No on the recall.

For vote ballot box locations in your area (instead of waiting in line during the pandemic), go here: https://lavote.net/home/voting-elections/voting-options/vote-by-mail/vbm…. We stand in solidarity with all of the working class within California who are under threat of having their minimum wages lowered to $0 an hour. Vote No.