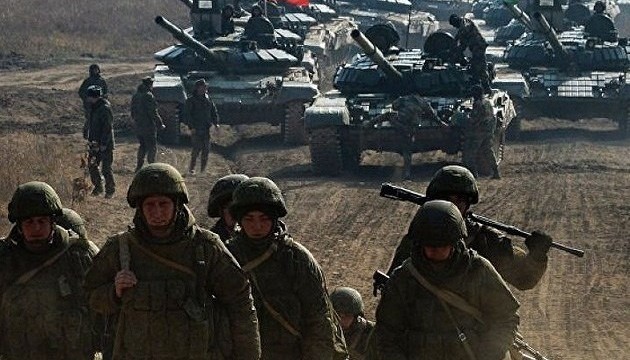 The following notes are a followup to the previous post Ukraine Crisis in Imperial Context. The author claims no special political or scholarly expertise on Ukraine. I’m simply trying to pursue the logic of the situation to the two possible conclusions, negotiated settlement or “Euromageddon.”

As Russian forces mobilize on the borders of Ukraine and the United States and most western European powers (except for German hesitation) respond with escalating threats, I suggest that a deal — a semi-secret or implicit deal, anyway — remains possible.

It’s not nearly as good a deal for anyone as what could have been reached at the beginning of the 1990s, when the Soviet Union and its Warsaw Pact alliance dissolved. That would have been the moment to wrap up NATO as well, instead of broadening its global mandate and triumphantly expanding it to Russia’s border nations. But the observations that follow are based on where we are now, not the more peaceful and hopeful world that might have been achieved back then.

1. Just because British intelligence and/or the CIA claim something or another doesn’t automatically mean that it’s false. In the present case, the allegation that Russian president-for-life Putin intends to install a puppet regime in Kyiv through an invasion or coup is entirely plausible. Indeed, if an invasion is one of Russia’s scenarios, imposing “regime change” on Ukraine would surely be part of the package. I suppose that the Brits made that announcement to publicize how much they know.

2. As I’ve argued previously, preventing the worst case of war over Ukraine — whether by Russian invasion, bombing or naval assault or massive cyberwar sabotage — depends on each side recognizing what the other cannot accept. Thus, no Russian government can accept the prospect of Ukraine joining NATO. And the West can’t tolerate Ukraine becoming a subjugated Russian vassal state.

3. In fact, incorporating Ukraine into NATO would also be disastrous for Ukraine and the West. Simply by cutting off Ukraine’s gas supply, Russia could bring the country to the point of collapse. Ukraine would become not only a political and military but also economic dependency of the West — and NATO states would be under treaty obligation to respond to any real or feigned Russian threat. In other words, Putin (or his successor) could yank NATO’s chain whenever it seemed advantageous to do so.

4. At the same time, either a Russian full invasion or risking a “limited incursion” into Ukraine would have catastrophic consequences for Russia. Although the Russian economy can survive the “massive sanctions” that the West would impose, it would be severely impoverished with dire impact on both its ordinary people and its elites.

Any invasion (beyond the eastern territories that Russia already controls through its proxies) would entail Russian casualties, possibly very significant with serious political consequences at home, and a Russian military occupation of Ukraine’s population centers would become a repeat of the 1980s disaster in Afghanistan that accelerated the USSR’s decline and disintegration. At the same time, NATO would respond by placing offensive weapons in eastern European NATO member states — exactly what Russia is desperate to avoid.

It is difficult to imagine that the Russian military command and Putin himself don’t recognize all this. That’s why many observers, assuming rational behavior by Moscow, think that an invasion is less likely than some other malicious mischief that it could direct against Ukraine or elsewhere in the region.

5. In short, both sides really need to avoid the very things that they’re threatening. But because they’re locked into their respective public positions —Russia’s demands for “written security guarantees” and the U.S.-European threat to take Russia out of the western-dominated financial system — they need to arrive at quiet or implicit understandings.

6. What would that mean? Of course we wouldn’t know all the details until the workers’ movement takes power and the revolutionary governments publish the imperialist “secret annexes” (following the Bolsheviks’ example in the Russian revolution). Roughly speaking, however, the Russian side would have to recognize Ukraine’s independence and sovereignty, while the U.S.-NATO side would promise — with or without Ukraine’s agreement — that Ukraine’s sovereignty would not enable it to join the NATO military alliance.

If the deal is reached and implemented, the United States could quietly abandon its objections to Nordstream 2 (the pipeline from Russia that Germany is particularly anxious to bring on stream). This would leave Russia’s annexation of Crimea as an accomplished fact (which it is) and eastern Ukraine’s fake Russian-created “people’s republics” as a bloody partial amputation to be somehow cleaned up later.

Such a resolution would have to take into account the complexities of the Russian as well as Ukrainian speaking populations of eastern Ukraine, and the need for some democratically agreed decentralization of authority, without surrendering Ukraine’s national independence or accepting the puppet “people’s republics” as legitimate entities. Even under the best circumstances, let alone the current fighting where an estimated 14,000 people have already died since 2014, all this is far from the peace and security that might have been attained after 1991 — a time when the United States was bloated with pride from its victory in the First Gulf War over Iraq in Kuwait, and figured it could unilaterally rule the world. At least, however, it would remove the imminent threat of catastrophe by intent or miscalculation.

7. We have no way of knowing whether such a package deal is being worked on behind the screen of public threats. Nor do we know whether or not Putin intends to invade Ukraine, or is bluffing, and with all proper disrespect to our high-priced intelligence services I suspect they don’t know either.

8. To me, the most potentially fateful unanswered question hangs in the air. Among many things I learned from the late heroic Israeli human rights campaigner, Professor Israel Shahak, one of the most important is the distinction between policies motivated by material state interests and those driven by ideology. Shahak repeatedly observed that while the former can be vicious and destructive, the latter — ideologically motivated — are even more dangerous.

In the present case, is Russia’s behavior motivated primarily by the objective fact that its state interests can’t tolerate Ukraine in NATO? Or does Putin really believe — and would the Russian military follow him in this — that Ukraine rightfully belongs to Russia, that Ukrainians and Russians are “one people” who must belong to one state, regardless of what Ukrainians may think?

Is NATO as it claims acting defensively for the integrity of Eastern European nations on Russia’s borders, or does it indulge the fantasy of bringing regime change to Russia by showing its offensive muscle? If I have to guess, the fact that western European nations have capitalist ruling classes who calculate risks and benefits in cold-blooded ways, while Russia is ruled by a mafia-capitalist regime, suggests that ideological delusion is more dangerous on the Russian side. But that’s just speculation.

9. The left is not a major player in the United States or Russia or Ukraine or the main NATO powers, and tragically we don’t have antiwar mass movements that might influence events. But there are principles and demands I believe we should put forward:

10. Returning to the main point, even though the competing “state interests” in this crisis have no progressive character whatsoever, they do contain the basis for a deal without war. On the other hand, ideologically driven policies or miscalculations can mean a rapid march to a “Euromageddon” with consequences difficult to contemplate.

During the epoch of the Cold War, some of us on the revolutionary left embraced politics proclaiming “Neither Washington Nor Moscow.” Three decades after that particular slogan became outdated, we could hardly have imagined how in an entirely new context it would be relevant again.

I also suggest reading an important piece by Simon Pirani Condemn Russia’s imperialist threat and one by Adam Tooze Chartbook #68 Putin’s Challenge to Western hegemony – the 2022 edition. Both have useful further links.