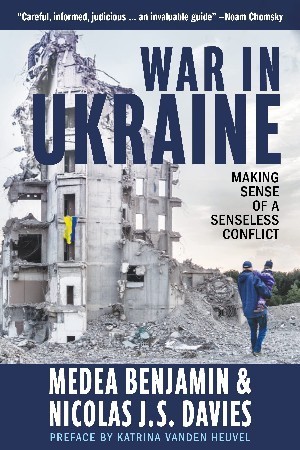 War in Ukraine offers a clear-sighted analysis of the conflict and the necessary response by the anti-war movement, argues Lindsey German

The war in Ukraine has shaped politics internationally for the past year. It has brought misery to the Ukrainian people themselves, now facing a bitter winter without infrastructure in many places, many dispersed as refugees throughout Europe, and threatened with further death and destruction. Shortages of gas and oil, rapidly rising energy prices, food inflation and shortages, and derailment of climate-change measures caused by increased use of fossil fuels, can all be traced at least in part to the war, and the sanctions and restrictions it has engendered internationally.

Governments like our own tend to blame all the ills that we suffer on the evils of Vladimir Putin and his invasion of Ukraine. Keir Starmer demands total silence from left MPs over opposition to the war, and there is talk within Labour circles of proscribing the Stop the War Coalition. The media coverage of the war totally excludes any dissident voices, while giving pride of place to ‘experts’ who are often former military figures. The reporting of the war highlights it from the point of view of tragedy for civilians, in a way that was never the case in Iraq or Afghanistan, or to take a contemporary example, Yemen, which suffers the worst humanitarian disaster in the world.

This short and highly readable book by two well-known US peace campaigners is a welcome antidote to much of what we see and hear about the war here in Britain. They – like nearly every peace campaigner – condemn the Russian invasion, but they also insist that the Western imperialist powers, and the military organisation Nato, played a role in leading to the current conflict, and that they should be looking for peaceful solutions rather than escalating it. This alone is enough to bring opprobrium on the heads of those making this case, who are accused of ‘repeating Putin’s arguments’. While this is redolent of similar attacks in previous wars – that anti-war campaigners supported Saddam Hussein, or the Taliban, or Slobodan Milosevic – this time it is considerably worse.

Indeed, any talk of peace, negotiations, or diplomacy is viewed as appeasement. There is even talk of ‘unconditional surrender’ by Russia as the only outcome of the war in Ukraine, conveniently forgetting that this is not a likely option for a nuclear power, nor that the similar surrender at the end of the Second World War was achieved by the detonation of two nuclear bombs and the development of a Cold War between the superpowers.

Benjamin and Davies take on these arguments in a lucid but always extremely calm and reasoned way. They trace the history of Putin’s relations with the West (fairly cordial and supportive of their war in Afghanistan), the emergence of further conflict over Nato expansion and the Syrian war, and then the ongoing conflict over the Donbas from 2014 onwards. They quote US diplomat Chas Freeman who calls the invasion this year ‘the worst strategic decision that any Russian government has made since Czar Nicholas II decided to go to war with Japan in 1904’ (p.18). But they also criticise Nato expansion eastwards following the collapse of the old Soviet Union and how this gave the Russia-Ukraine war another character, that of proxy war between Nato and Russia.

The book traces the recent history of the conflict before the invasion, starting with the Maidan ‘coup’ of 2014, which installed a pro-western government and opened up conflict in the east of the country, home to many ethnic Russians. The failure of the Minsk peace agreements, aimed at ending that conflict, helped pave the way to further war. The authors rightly highlight that Donald Trump’s presidency contributed to this:

‘Despite the Democrats’ efforts to smear Trump as a puppet of Russia, he reversed Obama’s prohibition on lethal military aid for Ukraine, and the UK and other Nato countries followed suit … the far-right Azov Regiment … was one of the first units to receive US training on new US grenade launchers’ (pp.59-60).

This period saw the build-up of trainers, advisers, CIA special operations forces, and the development of a major Nato base in the western town of Yavoriv, staffed by US, UK, Canadian and other Nato forces. By June 2021, Nato and Ukraine were conducting joint naval exercises in the Black Sea, and in September, fifteen Nato nations held a joint military exercise in western Ukraine. While Ukraine’s President Zelensky wanted a plan for Nato membership, this was not on offer; Nato continued training Ukraine forces but without committing to its defence as a Nato member. Military aid poured in.

The massing of Russian forces on the border began, and in February 2022 Russia invaded, in what was, as the authors say, ‘an illegal crime of aggression. But it was not by any means “unprovoked”, as US officials repeatedly claimed’ (p.80). Russia miscalculated militarily and politically as its extensive invasion met Ukrainian resistance and turned into a much longer war than expected. This changed the West’s view: despite hopes of peace talks in Turkey early into the war, which called for ceasefire and withdrawal, and Ukraine renouncing plans to join Nato, the West increasingly saw this as war which could be further prosecuted to weaken Russia and even effect regime change. Boris Johnson played a key role in visiting Kyiv in April and telling Zelensky to stop talking and continue to ‘press’ Putin militarily (p.84).

This meant an even greater flood of weapons into Ukraine from the US, followed by the UK and other powers, all contributing to escalating, not ending, the war. It also led to profound political changes across Europe, in particular in Germany, where its reluctance to increase military spending was abandoned, turning into a commitment to doubling it instead. In many countries including the US and Britain, the political consensus was pro war across the spectrum, with the Greens playing an especially belligerent role in Germany. Sweden and Finland applied to join Nato, abandoning their previous neutral status.

There were more serious consequences. In June, the research organisation Sipri reported that ‘the post-Cold War decline in nuclear weapons stockpiles was ending, and that nuclear arsenals were once again expected to grow in the coming years’ (p.176). Putin’s threat of the use of ‘tactical’ nuclear weapons is frightening enough, but the almost nonchalant way this is now being discussed by military ‘experts’, and the call by some Ukrainian politicians for the West to use first strikes to destroy these weapons, are truly terrifying.

Where does this leave the left and those campaigning against war? There is no question that the left is divided, with some supporting Nato policies and calling for more arms to Ukraine from Western governments. In most trade unions, there has been major debate on this, and the TUC congress in October passed a resolution calling for more defence spending, against the background of the war. Labour’s attack on the Stop the War Coalition, and the refusal of Labour MPs to engage on this issue, weakens the whole left. It also does no service to the people of Ukraine, who face either the prospect of a long war of attrition, or of one that escalates further. Peace talks would not, of course, solve many of the problems, but they would at least create the conditions to end the conflict.

As importantly, it weakens our own campaigning here. The government repeatedly justifies attacks at home – on pay and living standards – by blaming them on ‘Putin’s war’. It hopes to strengthen its position by blaming ‘the enemy without’. Supporting the increases in arms spending and production, giving the government support where none would be forthcoming over domestic issues, disarms our side in fighting our own ruling class. And we should always remember that our main enemy is at home in the class war, as it is for Ukrainians and Russians alike. Our fight has to be against our own government, on every level, which includes building an anti-war movement internationally.

As the authors of this very useful book remind us:

Book Review – Gangsters of Capitalism: Smedley Butler, the Marines, and the Making and Breaking of America’s Empire

Sense and Nonsense about Ukraine

Top reads on the Ukraine conflict, war and imperialism

A False Sense of Security

Putin has launched ‘the most senseless of all the wars’

The Forty-Year War in Afghanistan: A Chronicle Foretold – book review