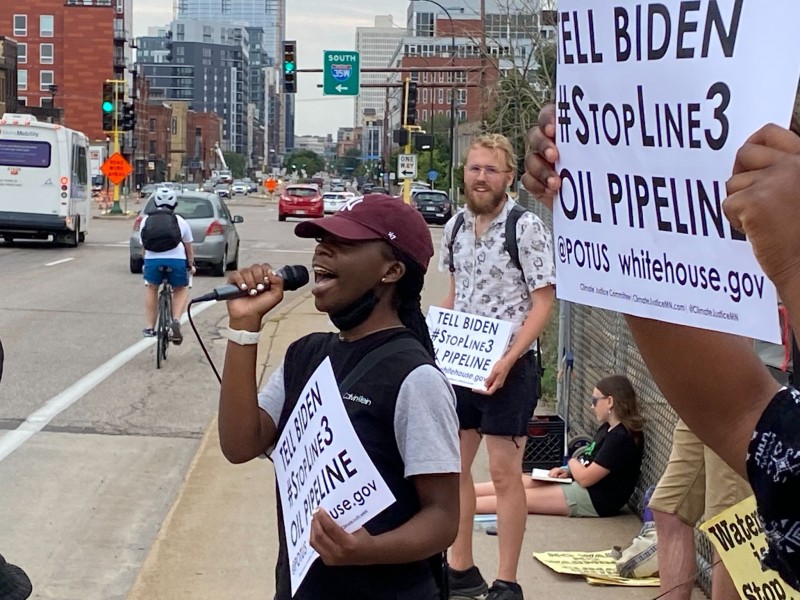 Minneapolis, MN – On August 4, over 30 people gathered on an Interstate 35W overpass, near the office of Biden ally Senator Amy Klobuchar. Via signage, song and chants, community members spread the message to thousands passing by in rush hour traffic: “Save our planet, not their profits” and “Love water, not oil.” Protesters urged commuters to contact President Biden directly to demand an end to Line 3, as the president could kill ‘the black snake’ with a stroke of his pen – but he continues to prioritize corporate profits over the health of people and the planet.

Line 3 is a pipeline currently being constructed in northern Minnesota by Canadian multinational company Enbridge. The construction of Line 3 is in direct violation of the State of Minnesota’s treaties with the Anishinaabe people and is a threat to tribal sovereignty.

Enbridge markets the pipeline as a replacement project, when in reality it uses a different corridor, expanding the territory defiled by the dying tar-sands industry. Building a new pipeline allows Enbridge to abandon the corroding, leaking pipeline already in existence, and instead exploit precious ecosystems in the name of capitalism.

Despite clear calls from environmentalists, indigenous peoples and their allies, Minnesota Governor Tim Walz and other state officials continue to tout fictionalized job gains as a reason to permit Line 3 to rob current and future generations of clean water and air. The pipeline would enrich only Enbridge. As Austin Dewey of the Climate Justice Committee explains, “Line 3 would bring few permanent jobs to the state, and instead suck billions into the pockets of Enbridge’s management.” The temporary construction jobs have the effect of creating man-camps near native communities. Communities which, due to systematic racism, land theft, and deliberate disinvestment by the federal government, experience a higher frequency of sex trafficking and violence against women.

Oil pipelines are the energy dinosaurs of a world slowly waking up to the dangers of relying on fossil fuels. Often called “the last pipeline,” Line 3 embraces the status quo of worshipping the oil industry, perpetuator of climate change and environmental destruction. Recent drilling fluid ‘frac-outs’ from Line 3’s reconstruction are harbingers of larger leaks that inevitably befall pipelines, especially those abandoned in the landscape in favor of new corridors. Any chemical spill near the headwaters of the Mississippi should be alarming to the millions living downstream, yet the banks funding the pipeline (TD Bank, Citibank, Wells Fargo, etc.) turn a blind eye. Those who can’t and don’t are the indigenous peoples who depend on the water, wild rice and wildlife. Water is life.

This protest was initiated by the Climate Justice Committee.