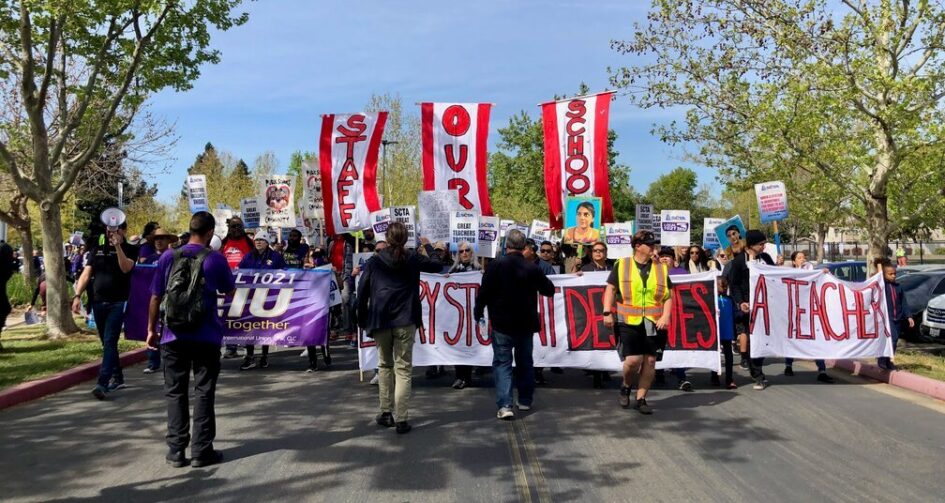 On March 31, 4,600 public school teachers and staff of the Sacramento Unified School District entered their seventh day of a strike. Their unions – Sacramento City Teachers Association and SEIU 1021 – are negotiating with the district for fair compensation, healthcare benefits, and safe staffing levels.

Teachers, staff and supporters gathered at school and work sites where they held spirited picket lines that included musicians, songs, recorded music and chanting. In the South Sacramento area, teams of strikers also rallied at multiple busy intersections near Luther Burbank High School and received many honks of support. Members of both unions later gathered at the school district offices for a very large picket line, march and rally.

The district is seeking major cuts while sitting on a huge amount of money. Since 2017, SCUSD has never had less than a $70 million surplus, and it has grown to $123 million today, 8.5 times higher than the minimum it is legally required to hold. The school district itself requested a neutral fact-finding report on the situation, but is now refusing to accept the results. At the same time SCTA reports that thousands of their students go without a teacher every day due to low staffing levels.

Robyn Sakakihara, an elementary school teacher and member of SCTA, told Liberation News, “As a teacher and parent I’m exposed to both sides. My daughter spent weeks in an auditorium. There was no sub for her teacher who was out on maternity leave.” SCTA members include K-12 teachers and substitutes, school nurses, librarians, psychologists and social workers. SEIU 1021 represents classified staffing including maintenance workers, school bus drivers, custodians, coaches, instructional aides and nutrition specialists.

SEIU 1021 members are fighting off a 5-year wage freeze proposed by the district. According to Karla Faucet, SEIU 1021 President, “Our workers have had no COLA [cost of living adjustment] increases in over six years already. We have many of our people struggling to put food on their table or pay their rent or homes. They’re working two to three jobs just to try to make a daily living.” She went on to explain that SCUSD Superintendent has received numerous recent raises including a 5.65% increase this year.

On the picket line at Luther Burbank High School, Charlisse Butler, who is the school’s Campus Monitor and Varsity Basketball Coach said, “I’m out here for a lot of reasons. I graduated in 2002 and started here in 2003. This is my second home. I’m out here fighting for our rights, myself, staff, and for kids. The cost of living is going up. We don’t need our benefits taken away.”

Chants at the strike actions included “When we fight, we win! When we strike, we win!” and “One day longer, one day stronger!” Teachers held a large march from the picket line on the busy boulevard to the district administration offices, carrying banners and signs reading, “Every Student Deserves a Teacher” and “Staff Our Schools” and, “Students, We’ve Got Your Back.”

The organization Sac City Parents 4 Progress has been carrying out a sit-in for multiple days and nights at the administration offices (the Serna Center), demanding the school district negotiate in good faith. They began a sit-in on Day 6 after the SCTA Bargaining Team and other striking workers marched into the Serna Center demanding to bargain with Superintendent Jorge Aguilar. Later that night Superintendent Aguilar had still not shown up, but SEIU members spotted him at a nearby Denny’s. They confronted him, and asked him why he wasn’t bargaining to reach a contract and end the strike. He finally made a brief appearance at 10:00 p.m.

SCTA President David Fisher also gave an update: “We are getting stronger. Last night our bargaining team was so inspired, at the drop of the hat there must have been a thousand of you out here at 6:30 at night.” He recognized the strike captains and said that they had reported to him that Day 6 was the strongest day yet on the picket lines. “Stronger than the first day,” he said. “It’s not just a slogan. It’s our reality. One day longer…” “One day stronger!” the crowd chanted back.

After Fisher’s remarks, rallying workers parted and the bargaining team and others marched into the Serna Center to demand to negotiate, while they were cheered on by union members and community supporters.

Workers vote to end strike at Kellogg’s, go back stronger

Cleveland Starbucks workers: ‘We are stronger together’