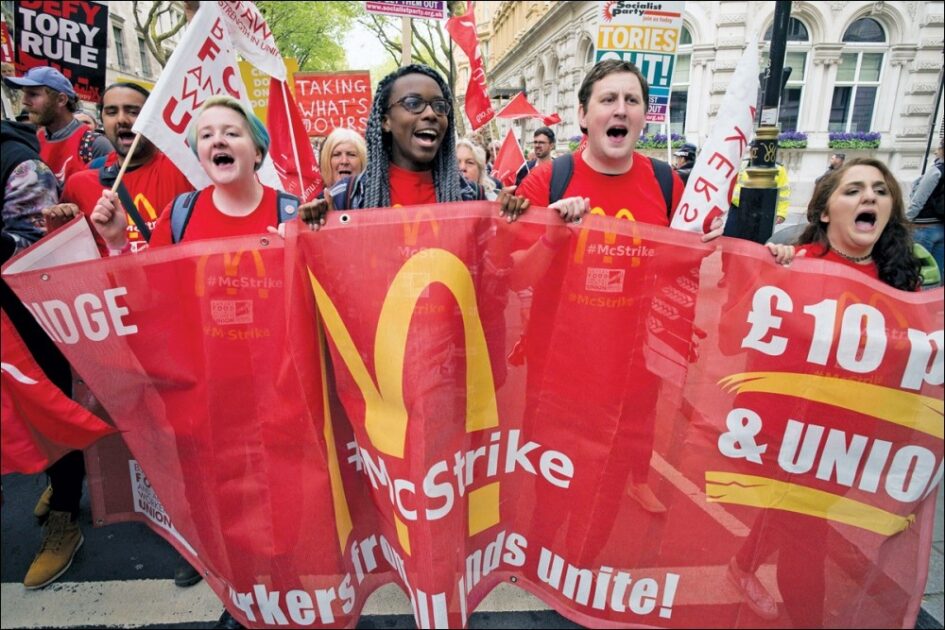 Editorial of the Socialist issue 1147 Boris Johnson’s lies about plans to ‘level up’ working-class communities are being destroyed as the Tories’ post-Covid austerity is stepped up. The combination of higher national insurance contributions, Universal Credit cuts and a freeze on the income tax personal allowance will take £1,040 a year away from the average supermarket worker.

For hospitality workers, nurses and social care workers the hit is bigger at about £1,100.

Nor will the national insurance hike result in any significant steps to solve the acute social care crisis. Johnson’s plan does nothing to change the way social care is currently overwhelmingly privately run, putting profit before safety.

Average pay for care workers is a paltry £8.50 an hour. No surprise then that there’s currently a shortage of 170,000 care workers.

Johnson’s plan will not provide any extra money for the system for two years – during which time an estimated almost 70,000 adults are expected to die while waiting for social care. In addition, the £86,000 cap on costs will still be crippling for most working and middle-class families who own their home.

This latest example of the vicious anti-working class character of the Johnson government has led to palpable anger among the majority of the population, including many who voted Tory in the 2019 election.

To date, only a few Tory MPs have rebelled, but splits in the Tories look set to deepen as backbenchers reflect both the capitalist elite’s fears about Johnson’s unreliability, and their own fears that they will lose their seats at the next election.

Under the impact of coming events, this weak Tory government could be forced out of office.

Anger at the Tories has even, in some polls, pushed Labour into the lead for the first time since Starmer was elected leader. This does not reflect enthusiasm for Labour’s proposals on social care – because Starmer’s New Labour doesn’t have any!

Even the right-wing capitalist Times newspaper ran an editorial accurately pointing out that Johnson “is a lucky politician” because he faces only the “lacklustre” Starmer with no plan for social care of his own.

They go on to comment that, in contrast to Starmer, even Jeremy Corbyn “might have put the government under some pressure with a plan to raise even more money via some kind of wealth tax, no matter how implausible”.

The Murdoch owned Times might consider a wealth tax to pay for social care implausible, but – with 75% supporting it in polls – it would certainly be popular.

In fact, under Jeremy Corbyn’s leadership of the Labour Party there was a costed proposal for social care included in the 2019 general election manifesto.

It pledged an extra £10.8 billion to establish a National Care Service including free personal care for over-65s, an end to 15-minute maximum home-care visits, and an increase in the carer’s allowance.

Instead of making the working class pay for their proposed National Care Service, costings which accompanied the manifesto calculated that, by taxing capital gains and dividends at income tax rates, they would be able to raise £14 billion. The manifesto also promised a £10 an-hour minimum wage, and the banning of zero-hour contracts.

Labour’s 2019 manifesto policy would have been a step forward, but did not go far enough; it did not call for ending the social care market.

The Socialist Party calls for the bringing of all social care facilities into public ownership under democratic control, in order to provide free, high-quality services for all who need them.

Nonetheless, Starmer’s New Labour is so desperate to prove that it has broken with Corbynism, and can be relied on to do the bidding of the capitalist class, that it would far rather have no policy at all than propose these modest steps forward from 2019.

Starmer’s complete abandonment of Corbyn’s manifesto has been combined with a systematic campaign to drive socialists out of the Labour Party. Labour was founded by the trade unions in order to provide a political voice for the workers’ movement.

Yet now the president of one of the trade unions involved in founding Labour over a century ago, Ian Hodson of the Bakers’ Union (BFAWU), is being threatened with expulsion for the ‘crime’ of opposing the expulsion of Corbyn supporters. What next? Will Labour Party members be expelled for daring to put forward Labour’s 2019 manifesto?

As the pro-capitalist Starmer supporters step up their stranglehold on Labour, the need for a party that does fight in the interests of the working class – on social care and all the other issues – is posed.

In response to the threatened expulsion of Ian Hodson, the BFAWU has called a conference to discuss disaffiliating from Labour. If they vote to do so, it will send shock waves through the trade union movement. Discussion will be triggered on the need to build a new mass workers’ party.

Such a party, even if it initially began with a modest number of MPs and councillors, would give huge confidence to all those wanting to fight back against post-Covid austerity.

Of course, such a party would also discuss and debate how to build a society able to meet the needs of humanity and the environment.

A wealth tax would be a start. But the capitalist class would not willingly allow their profits to be cut into. In the view of the Socialist Party, we need to be able to plan the funding of health, social care, education and other services based on need not profit.

A starting point to achieving that would be for the major companies and financial institutions to be brought into democratic public ownership under democratic working-class control and management, with compensation paid only on the basis of proven need.