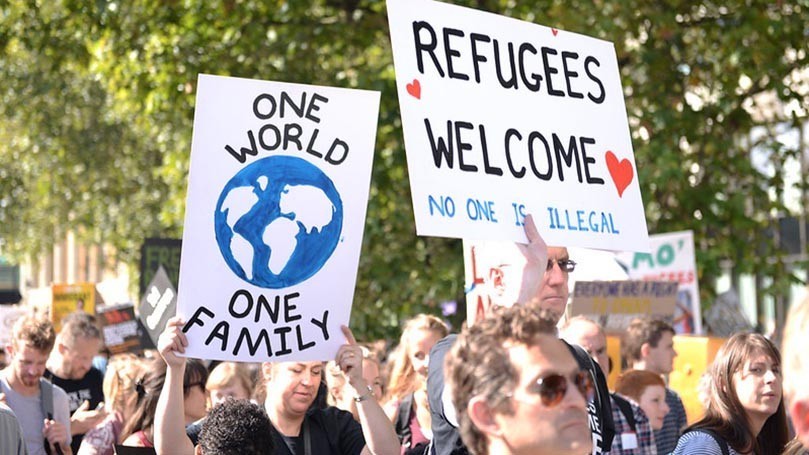 On Monday, the whole world saw shocking footage of mounted U.S. Border Patrol cops whipping Haitian migrants and refugees in Del Rio, Texas.  The migrants were  crossing the Rio Grande from Ciudad Acuña, Mexico, in some cases to bring food to family members who are part of a group of more than 15,000 migrants  camped under a highway bridge attempting to get asylum in the United States.

The agents used their horses to block the paths of men, women, and children and were seen using the long reins of their horses as whips.  One agent was heard to shout at the migrants that their behavior is the reason that Haiti is a “shit” country, an echo of similar comments made by Trump about non-European countries whose immigrants come to the United States.

Border control cops are notoriously pro-Trump and were sent by the ex-president to Portland as shock troops to intimidate demonstrators during the George Floyd uprising.

This ugly racist incident occurs as the Biden administration ships thousands of Haitian migrants back to Haiti, using the pretext  of Title 42 of the United States Code of Federal Regulations, which allows the government wide authority to deal with epidemics.  This use of Title 42 was initially imposed by the Trump administration, and despite protests, Biden is continuing it.

This inhumane airlift must end immediately! It is callous, opportunistic, and at best hypocritical. You cannot stand at the UN making lofty speeches  about our shared humanity and “values” while at the same time loading asylum-seeking black Haitians onto hell-bound flights to where they were trying to escape from in the first place. Well, you can, but not without folks drawing  conclusions.

Haiti has been recently hit by storms, by a deadly earthquake which killed more than 2,000 people and left hundreds of thousands homeless, and by dangerous political instability, including the recent assassination of President Jovenel Möise. Meanwhile, the Covid-19 pandemic is  disrupting life in this, the poorest country in the Western Hemisphere.  Because of these crises, Haitian officials have implored Biden not to go ahead with the mass deportations.  Many of the Haitians in Del Rio and elsewhere had been working in Chile and Brazil whence they had migrated after the massive earthquake in January 2010, but employment in those countries dried up, and so they have headed to the United States in desperation. But Haiti is in no condition to deal with the problem of resettling them.

The use of Title 42 in this manner is an effort to evade the requirements of international law that all people who cross our borders seeking asylum must be given a proper chance to prove that their application is merited.

A number of prominent political figures in this country, including House Speaker Nancy Pelosi and Congresspersons Ilhan Omar and Alexandria Ocasio-Cortez, have responded to this racist incident with a mixture of anger and disgust, and have called for investigations and changes of policy.

The Communist Party hastens to point out that the incident is part of a long trajectory of abusive behavior toward Haiti by U.S. (and also French and Canadian) imperialism.  From 1915 to 1934, U.S. troops occupied Haiti and handed over management of its economy to  finance capital, which looted  the country.  Then the United States allied itself with right-wing dictators who suppressed all efforts by the Haitian people to escape grinding poverty.  The United States also imposed trade regimes on Haiti that stunted its national economy, especially in the agricultural sector. In 2004, the United States, allied with France, Canada, and thuggish elements of the Haitian right, carried out the overthrow of left-wing Haitian president Jean-Bertrand Aristide.  Instability created at this point brought in a United Nations “peacekeeping” force which worsened the situation, among other things by causing a cholera outbreak due to their improper disposal of their waste.  This is the imperialist context which has created the pressure for Haitian workers and farmers to have no other recourse than to emigrate so as to be able to work and feed their families.

The Communist Party USA points out that much more needs to be done beyond tweaking immigration policies and punishing a few exceptionally racist and  brutal officers.

*That all Border Patrol personnel who have behaved in this matter, including supervisory personnel, be fired.

*A complete overhaul of border control mechanisms and of U.S. immigration, refugee, and asylum policy, including comprehensive immigration reform with a clear path to citizenship.

*The  strict adherence of the Border Patrol and all other U.S. government agencies  to national and international law with respect to the treatment of migrants, refugees, and people seeking asylum.

*A complete reset of this country’s foreign and international trade policies, to the end that, rather than unilateral sanctions, intervention, regime change, and the imposition of neoliberal trade and economic policies, all the countries in the hemisphere be supported in their efforts to protect their national sovereignty and maximize the economic development of their peoples.

*Rather than a confrontational “my way or the highway” approach, cooperation with international and regional groups  including CELAC (the Community of Latin American and Caribbean States), replacing the discredited Organization of American States to impose imperialism’s will on the hemisphere.