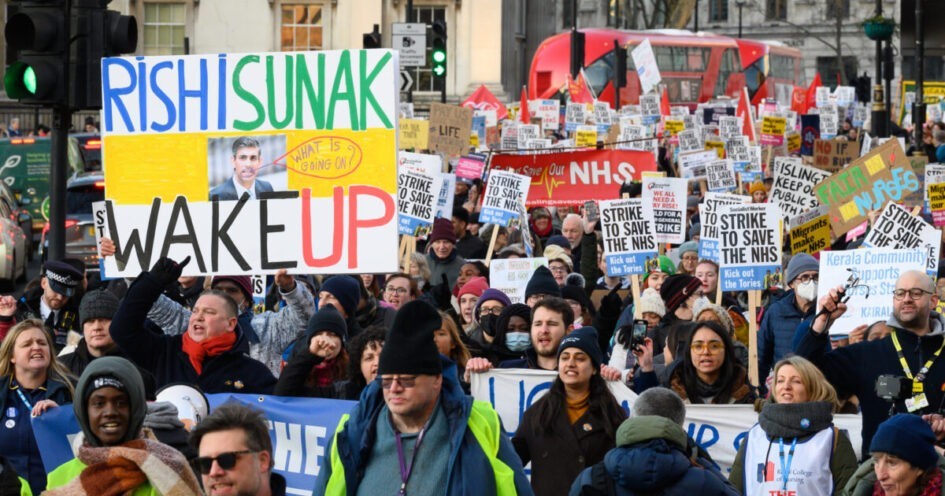 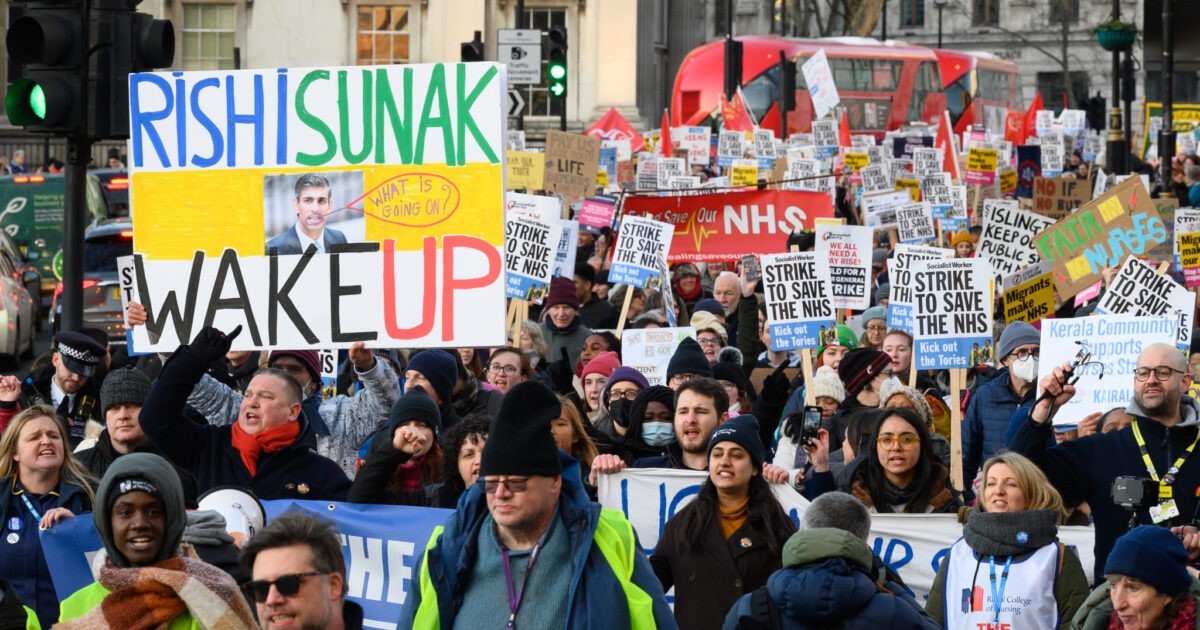 U.K. Workers Rise Up Against Conservatives’ Attempt To Hollow Out Their Right To Strike.

The United Kingdom has teetered on the edge of a ‘de facto general strike’ for months as workers protest an intensifying cost-of-living crisis. But rather than meeting the workers’ demands for adequate pay and benefits, the government has simply decided to outlaw the right to strike for hundreds of thousands, if not millions, of workers.

The Strikes (Minimum Service Levels) Bill, introduced in Parliament on January 10, would affect workers across six sectors of the U.K. economy — health, fire and rescue services, education, transport, nuclear decommissioning, and border security. Under this law, the government could force these workers to cross their own picket lines to provide “minimum levels” of service on strike days. If they fail to comply, workers could be instantly dismissed and their unions slapped with ruinous lawsuits.

Given the Tories’ majority in the House of Commons, the Strikes Bill will likely pass in the coming months, allowing the government to force workers to break their own strikes. The lack of clarity in the bill hands unprecedented power to the secretary of state. There is no guidance on what minimum service levels are or how they are decided, no definition of the “reasonable steps” the unions must take to effectively undo their own organizing efforts and force their members into work, and no guarantee the government will stop here, with Conservative Members of Parliament already demanding more sectors be covered by a proposal that effectively hollows out the right to strike.

The bill comes amid a “winter of discontent” when U.K. workers are striking, or preparing to strike, to protest public services increasingly being run for profit. Strike days in the U.K. reached a thirty-year high in 2022 as negotiations stalled across sectors. With the cost-of-living crisis continuing unabated, the beginning of February is likely to see one of the biggest strike days in the U.K. in recent history, with close to half a million workers participating.

On January 16, the National Education Union announced its ballot had passed the necessary thresholds to take strike action, signaling that 300,000 teachers will walk out February 1 alongside 100,000 civil servants represented by the Public and Commercial Services Union. The National Union of Rail, Maritime and Transport Workers has also declared further strike action February 1. Some 300,000 nurses, represented by the Royal College of Nursing (RCN), also plan to walk out a few days later. Further strikes are expected across the Fire Brigades Union and the Communication Workers Union, who will have 115,000 postal workers vote to authorize additional actions. Many of these strikes will coincide with the February 1 national protests to protect the right to strike.

Observers argue this wave of worker militancy is best understood as the “inevitable result” of Conservative Party-led austerity since 2010. Real wages are lower today than they were in 2008; life expectancy has widened between rich and poor; the social safety net has been slashed to the bone; and public services are in disarray.

The National Health Service (NHS) is a particularly illustrative example of how a decade of austerity has affected the U.K.’s public services and public sector workers. Campaigners affiliated with the umbrella group SOS NHS state that the service is undergoing a “humanitarian” crisis. In 2022, the U.K. reported 35,000 excess deaths (the third-highest figure outside of the pandemic in the past 70 years) which analysts understand to be closely associated with the severe underfunding of the NHS.

Waiting lists are at record highs and the number of patients waiting more than 12 hours for emergency care increased by an astounding 2,215% between 2019 and 2022. Nurses’ pay has declined by 10% since 2010 while there are currently more than 130,000 vacancies across health services. A 2022 survey conducted by the RCN found that 83% of nurses believed that staffing levels had not been sufficient to “meet all the needs of patients safely and effectively” on their most recent shift. In the language of the new bill, minimum service levels have not been met in the NHS for years.

Rather than investing in the NHS to save lives, however, the government claims its Strikes Bill is the way to ensure public safety. The actual bill does not mention the word safety once. As such, anti-strike legislation masquerading as public safety measures, promoted by a government that has systematically destroyed public services, has gone down poorly with the workers themselves. Jordan Rivera, an occupational therapist with the NHS, expressed this frustration in front of thousands of protesters outside the prime minister’s residence Monday night: “How dare they demand higher standards on strike days than we can provide the rest of the year?”

The U.K. secretary of state suggested this “legislation simply brings us into line … with many other modern European nations, such as Spain, Italy, France and Ireland,” which do mandate minimum service levels. Crucially, however, these levels are developed with unions’ input, not dictated by the government. Many of these European countries also have higher rates of collective bargaining and fewer restrictions on union activity.

Ultimately the Strikes Bill must be seen in the wider context of the U.K. government’s authoritarian turn. In April 2022, the Tory government forced through the Police, Crime, Sentencing and Courts Act (PCSCA), legislation that clamped down on the right to protest, allowing the police to shut down protests they deem too noisy or too disruptive and increasing fines and prison sentences for breaches of these new conditions. Not content with this already grave infringement on basic human rights, the government has recently announced further amendments to the PCSCA, now permitting the police to arrest protesters who might go on to cause serious disruption at some point. The Strikes Bill is yet another effort to offer similarly punitive “solutions” to the deep crisis afflicting the U.K. economy.

Fortunately, the Strikes Bill has garnered massive opposition. The International Labour Organization and the U.S. labor secretary have come out against the U.K.’s clampdown on workers’ rights. Even the Labour Party, which failed to properly support any of the strikes in 2022, has vowed to repeal the Bill if they win the next election. And most importantly, unions have fought back against the bill, with many refusing to accept labor law designed to shackle the movement.

Matt Wrack of the Fire Brigades Union struck a defiant tone outside the prime minister’s residence on Monday, telling workers to not rely on the law. “We will not accept your laws and we will not comply with them,” he announced. Wrack’s approach signals a break from the trade unionism of recent decades, which has looked to the law rather than the street. Instead, Wrack and his fellow unionists seem to be drawing lessons from the union struggles of the late 1960s and 1970s — the last defining period of working-class advancement — when 95% of all strike action was “unofficial.” The labor movement’s challenge has long been to emulate these militant predecessors, and hundreds of thousands of workers in the U.K. are rising to the occasion.