‘We won’t pay!’: Protesters take to the streets against Tory-made cost of living crisis 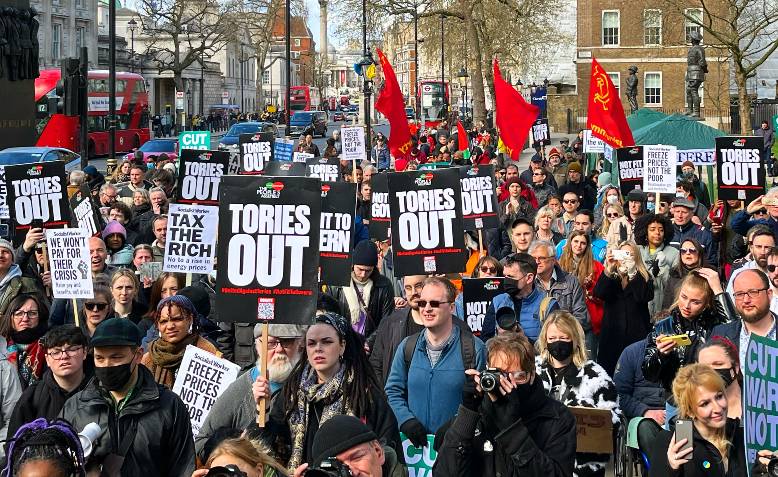 Hundreds of protesters gathered outside Downing Street in an energetic protest against the cost of living crisis and to stand in solidarity with the 800 P&O workers, who were shockingly sacked over Zoom.

The day after the energy price cap rose by 54%, plunging millions into fuel poverty and increasing the hardship on working people, the People’s Assembly organised over 20 protests across the country calling for the government to take action to reduce the burden on the poorest in society.

The demonstration in London heard from Jeremy Corbyn as well as speakers from DPAC, Stop the War, NHS Staff Voices, XR, actors and comedians. Many speakers drew attention to the horrific decisions people are being forced to make between eating or heating and the failure of the government to offer any support to these people.

Many also pointed out that this is the product of a broken system, where energy companies can make record profits while people see their bills rise by hundreds of pounds. Jeremy Corbyn, among others, called on the government to take action to reduce energy prices and for the energy companies to be brought into public ownership so that they can function for public good rather than profit.

An enthusiastic crowd joined Manchester People’s Assembly Against Austerity for a demonstration in Manchester City Centre on Saturday, 2 April. It was part of the People’s Assembly’s National Day of Action on the cost-of-living crisis and expressing solidarity with the P&O workers disgracefully sacked by their employer without consultation.

Speakers included Afzal Khan, Labour MP for Manchester Gorton, and Darren Ireland, North West Regional Organiser of the RMT, as well as campaigners from Toothless, the CHEP dispute, a local tenants’ association, and Unison, among others.

The PCS Band ensured a vibrant atmosphere was enjoyed by all, and the people of Manchester made their support for the demonstration known, with plenty of solidarity from shoppers and local workers on display throughout the afternoon.

About 100 people gathered in the main shopping thoroughfair in the centre of Bristol to speak out against the cost of living crisis at the Bristol People’s Assembly protest. Speakers included: Carla Denyer, leader of the Green Party, An Acorn member Matt Hollinshead, Chair of the Bristol Trades Council Sheila Caffrey, Steve Gower of XR, Tom Whittaker for Stop the War Coalition, Lin Clark for Stand Up To Racism and Tom Baldwin on behalf of Unite Community.

Around 150 people gathered at the Civic Centre in Newcastle for a loud and vibrant march down Northumberland Street before assembling for a rally at Grey’s Monument. Mainly made up of trade union groups, the march was notable for the presence of two large UCU banners, visible alongside the People’s Assembly placards.

The UCU, which has taken ten strike days in the last three weeks, was represented by Adam Hansen, Northumbria University branch chair. Speaking from the platform, he described the real-term pay cut of 25% that HE workers have suffered over the last ten years, in addition to precarious contracts and widening pay inequality impacting on female and BAME staff, before leading the rally in chanting a Geordie version of the motto that power concedes nothing without a demand – “Shy bairns get nowt!”

Other speakers included John Harrison of DPAC who emphasised the devastating impact rising living costs will have on disabled people, many of whom are stuck indoors and stand no chance of being able to pay for it. Other trade unionists were there, such as Ronagh Craddock, regional organiser of Unison Northen, and Alex Snowdon of the NEU who pointed to the detrimental impact of childen and young people of the staff retention crisis amongst school staff.

John Woodhouse of the CWU, which has just successfully balloted for strike action amongst Post Office counter workers, powerfully spelled out what the cost of living crisis really looks like. While Virgin Media customers will see their bills rise by 11.7%, Virgin Media enjoyed profits of over £10 billion last year.  We aren’t ‘all tightening our belts’. Some of us are being squeezed, while others are the squeezers. He called up the trade union movement to act together to put a stop to the race to the bottom in pay, conditions and living standards.

In addition to the high quality of trade union speakers, Emma Pearson and Rosa McCreery spoke from the local No2Hassockfield campaign against the brutal detention centre in County Durham which detains women refugees. They linked the fight with the need for class unity with the message, “the hardest hit will be working class people migrants, will be asylum seekers, will be refugees.”

Tony Dowling, chair of North East People’s Assembly, ended the speeches will a call upon everyone to communicate, build and organise amongst their colleagues and in their communities and build the movement a big as possible for the national TUC demonstration in London on Saturday 18 June.

This is in every sense a movement of movements, with the trade unions at its core, demonstrating the breadth and scale needed to shift the balance in favour of working people and topple the Tories.

Cost of living crisis: We need a pay revolt! – News from the Frontline

Cost of living and the Tory assault: How we fight back

The Cost of Living Crisis

The cost of living crisis is a political choice

The cost of living crisis: all out this Saturday!

In a cost of living crisis, Croydon Hospital workers show how to win – News from the Frontline

Why should the working class pay the cost of the capitalist crisis?