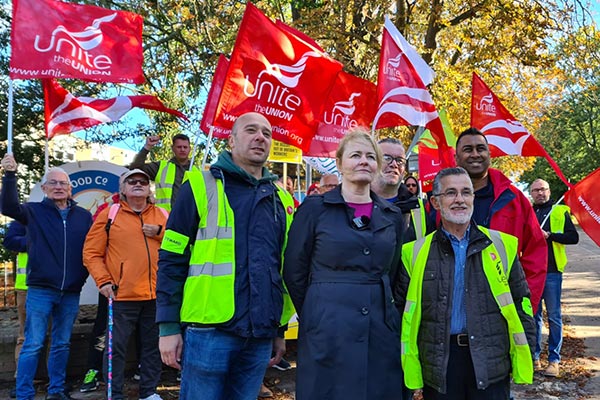 Workers at Weetabix factories in Kettering and Corby in Northamptonshire are still on strike over fire and rehire.

They held a protest ­outside the main factory in Burton Latimer, Kettering, on Wednesday of last week. Unite union general secretary Sharon Graham joined them.

The workers face changes to their shift and working patterns that would result in some engineers losing as much as £5,000 a year.

Weetabix’s parent ­company, is Post Holdings Inc, the US cereal giant. Its latest accounts show it had a ­turnover of £4. ­billion and an operating profit of £518 ­million. Its cash reserves are £890 million.

Graham said, “Unite is there to defend the jobs, pay and conditions of its members.

“This is a totally ­unjustifiable assault on workers’ wages and conditions. Last year Weetabix’s profits went up by almost 20 percent to more than £81 million.

“Where is the justification for the brutal fire and rehire ultimatum?”

The Weetabix strike is the first big fire and rehire campaign under Graham’s leadership. It will be important for Unite to reject any bad proposals from the company and for the strike to stay strong under pressure.

The strike has already caused some production problems for the company, as engineers who fix problems when the machinery goes down are out.

The best way to win would be to escalate to all-out strikes rather than two days a week.

And it will be crucial for Graham to ensure ­workers have the resources and ­confidence to win the dispute.

Over 400 workers at the Stanlow oil refinery in Cheshire have voted in favour of strikes by 98 ­percent. Unite union members are in dispute over the Essar company’s failure to honour a pay agreement and to pay the workers a bonus in 2019-20 and 2020-21.

They’re also angry at the proposed closure of the final salary pension scheme.

With the fuel ­shortages, they could win almost ­anything they want at the moment.

Scaffolders for contractor Actavo Limited working on the British Steel site in Scunthorpe began an all-out strike on Monday in a long running dispute over pay.

The 60 Unite union members began action in 2019. They want workers to be paid in line with the National Agreement for the Engineering Construction Industry (Naeci). The rates for the workforce are currently 10 to 15 percent below these rates.

Scaffold workers at Altrad at the Mitsubishi Chemicals plant in Billingham, Teesside, are being balloted for strikes over pay.

Redistribution, rent strikes and revolt – the Poplar rebellion 100 years on