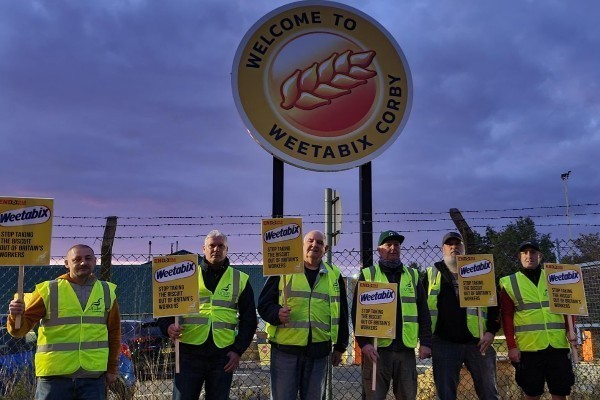 Engineers at two Weetabix factories in Kettering and Corby in Northamptonshire began their first 48-hour strike on Tuesday.

They are striking against fire and rehire proposals that will mean some stand to lose £5,000 a year. Others are being moved off a Monday to Friday shift pattern to one where they have to work weekends.

Strikes are planned for Tuesdays and Wednesdays every week until the end of November.

Striker Martin has worked at Weetabix for over 30 years. He told Socialist Worker that the company wanted workers to “voluntarily” take a pay cut to get around breaking their contracts.

Martin may lose up to £4,600 if the proposed changes go through as he’s on a “legacy contract” and faces losing shift premiums.

“We’re on strike to show the company we don’t accept the proposed changes,” he explained. “New workers who come in are told they won’t be on the same wage, making it easier to divide us from each other.”

Just over 50 of the engineers represented by the Unite union are striking at Kettering, with another dozen also out at the smaller factory in Corby. The pickets are getting a friendly response from passers-by with horns beeping.

It’s Martin’s first time on strike at Weetabix. He thinks the pandemic has meant more bosses are bringing in conditions that hit workers hard.

“Workers will continue to pay the price of the pandemic, especially through fire and rehire,” he said.

“Throughout the pandemic engineers had to work, we soldiered on and followed all the regulations and rules. Nearly all of the office staff were allowed to work at home and many haven’t come back.

“It’s engineering that has been targeted for the cuts—that’s where they want to impose cost savings.” Workers were previously meant to strike from June until September. This was postponed to allow for talks with the employer. Weetabix made some concessions, but not enough.

Workers rejected the new proposals by 82 per cent in a consultative ballot.

But workers will be deemed to have accepted the changes if they carry on working, regardless of whether they sign a new contract.

Workers are also concerned about pressures that some say could risk safety.

“Often a job is actually a two-person job, but instead we’re having to do it as a one-person job,” one striker said. “That’s because we’re under so much pressure to keep the production lines going. This is a health risk.”

At the moment the strikers feel that their action will have an impact.

But as other fire and rehire battles, such as the one at JDE coffee in Oxfordshire showed, escalation is the best way to win. At JDE bosses held out against selective strikes and union leaders eventually helped to push through a rotten deal.

An all-out strike would really squeeze the company.

A giant union like Unite, now with new general secretary Sharon Graham, can sustain a strike of a few dozen workers easily.

It should call for support from the whole membership and draw a line to stop all the attacks at Weetabix.