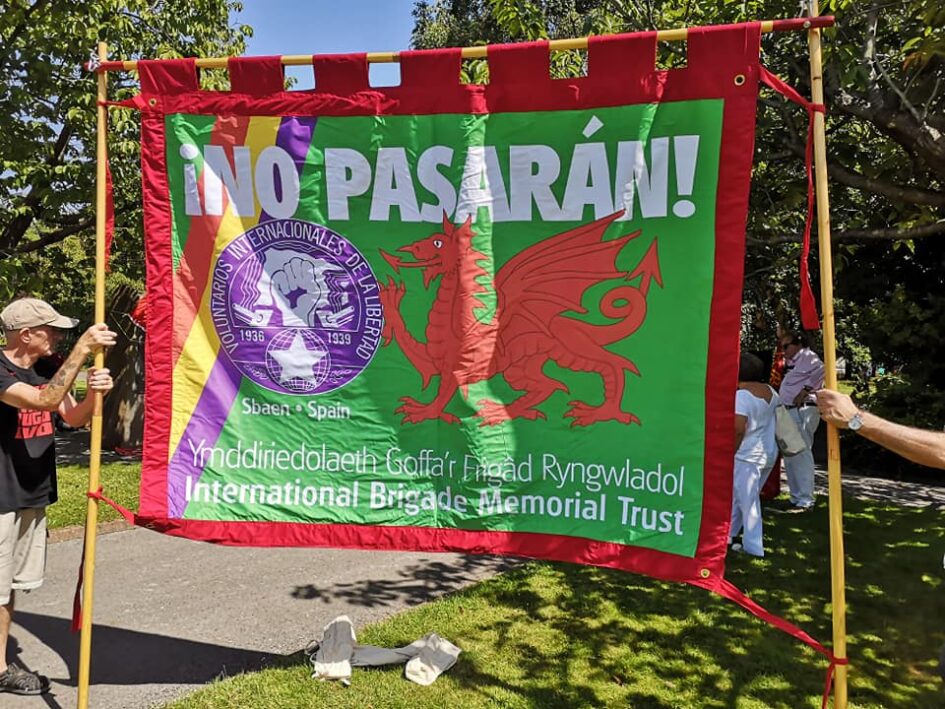 There were revolutionary songs from Cor Cochian Caerdydd and a poem and reading from IB Cymru. Keeping alive the memory of the Welsh international brigaders

Will Barton’s speech:”Whenever I think about it, I am still astonished that, 85 years ago, men and women from around the world left behind their homes and families to risk their lives in defence of the Spanish Republic. They all made great sacrifices and many made the ultimate sacrifice, not in the name of nationalism or that patriotism that Dr Jonson called the last refuge of a scoundrel, but for the sake of a great noble ideal – freedom, anti-fascism and international solidarity.

They were not swept up by peer pressure and vain ideas of glory, like the volunteers of a previous generation in 1914. They knew the grim nature of the modern warfare in which they were going to engage. Nor were they conscripted, or even urged by their governments, indeed they had to travel secretly in order to be allowed to get to Spain at all.

They knew the odds were against them. The most modern armaments produced by Fascist Italy and Nazi Germany were being deployed against them, while the governments of Britain and France, in the name of a grotesque “neutrality”, prevented arms shipments to the Republican forces.

I marvel at the bravery and the moral courage of these volunteers. Those we commemorate today died resisting the spread of fascism across Europe and the world. They were the first to fall in a conflict that ended nine years later in Berlin and Nagasaki, a conflict that in the end cost countless millions of lives, and that might have been avoided if Britain, France and other countries had stood up for their proclaimed democratic principles.

And yet, of course, the war never really ended. In Spain, the resistance to Franco ended only with his death and the Republic has still not been restored. The allied forces that defeated Hitler were immediately repurposed to resume the fight against the USSR and the Socialist countries that had motivated their reluctance to oppose the Axis in the nineteen thirties.

In Korea, in Malaya, in Vietnam and across Africa, that war went on by proxy, killing yet more millions.Even after the fall of the USSR in 1991, despite a lot of inconsequential talk about a “peace dividend”, the armies of Capital continued to bomb and kill across the middle east and Afghanistan and the war against socialism in the Spanish speaking world has raged across Argentina, Chile, Venezuela, and much of the rest of South and Central America.

Now, as I speak, People’s Cuba is being denied, not only food and fuel imports but even the medical supplies it needs to fight the Covid Virus.

The American blockade of Cuba is killing Cuban children right now and the American Secret forces are seeking to use this suffering to undermine the Cuban government by staged demonstrations. They block vital supplies and then manipulate the tragedy for their own dirty ends.

In America and increasingly in Britain and the rest of Europe, Antifascist movements and aligned ones like Black Lives Matter are being grotesquely libelled as subversive, dangerous, Marxist and anarchist attacks on “our” civilisation.

Antifascism is portrayed as a violent conspiracy, We have to defend antifascism as the noble cause it still is.So the torch handed on by those we honour today must be carried forward in the struggle for Freedom, Peace and Socialism and against Oppression.

Their deeds must never be forgotten and their cause must go on to victory.