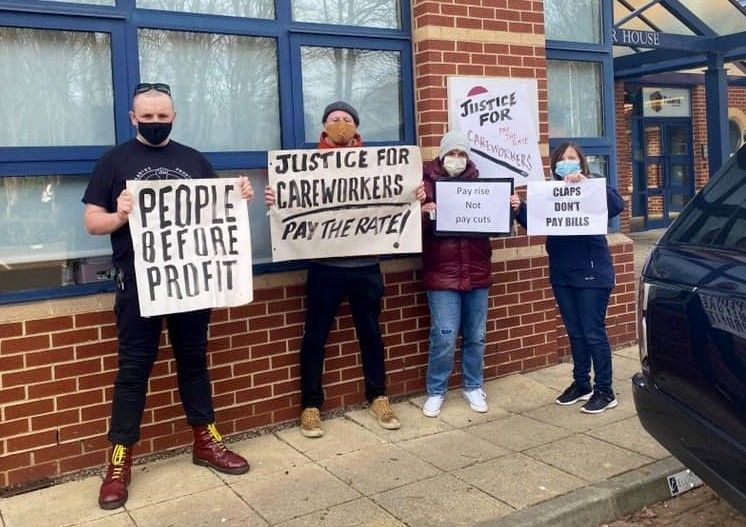 In the latest instalment of our What a Way to Make a Living series, an rs21 member discusses their experience of working in care and how wider changes to the care sector have affected the pay, conditions and experience of care workers over time.

Care work should be one of the most rewarding jobs a person could do. Unfortunately in our society it is often one of the worst. Below are some of my thoughts and experiences from working for 16 years in social care.

During my first few years working in care I was employed by Social Services. Wages were not great but they tended to be better than in the private sector. Staff also had access to the local government pension scheme. Staff were encouraged to attend numerous training courses to improve their work practice. The council even paid for me to attend a three-day swimming life-saver course so that I could safely take service users swimming.

Unison was the recognised union at the county council. After a fight for equal pay, many care workers received several thousand pounds in back pay. This was due to the fact that care work, which is predominantly undertaken by women and often women of colour, was paid less than other jobs of equal skill.

After the coalition government came to power in 2010 they were determined to force councils to outsource social care to save money. I was no longer employed by the council but by a social enterprise. This resulted in a two-tier workforce. New staff were put in the inferior Nest pension scheme. Holiday entitlement was cut and pay was cut to the minimum wage.

Things got even worse when I became an agency carer. Often my shifts were cancelled on the way to work. Sometimes I was lucky to be offered one shift a week. The use of casual contracts is often the preferred employment practice by employers now. Wages are rarely above the minimum wage and there are an estimated 100,000 job vacancies in social care. If supply and demand actually worked, care wages would rise until these vacancies were filled.

A toxic combination of low wages, staff shortages and poor training means that carers can rarely provide the standard of care they would like to. Stress levels can be unbearable. It is often a challenge in care homes to keep all residents safe.

Care managers are under pressure to respond by denying problems. In my experience, managers have claimed there are no staff shortages, putting pressure on the carers to work harder. If staff are stressed they will be offered six free counselling sessions to build ‘resilience’. Thus blame is placed on individual care workers when they cannot cope with unbearable pressure.

It is very clear that care is not a priority and is instead seen as a burden under capitalism. This situation will only get worse with an aging population. Our fight is to build a better world where care is central to all we do.