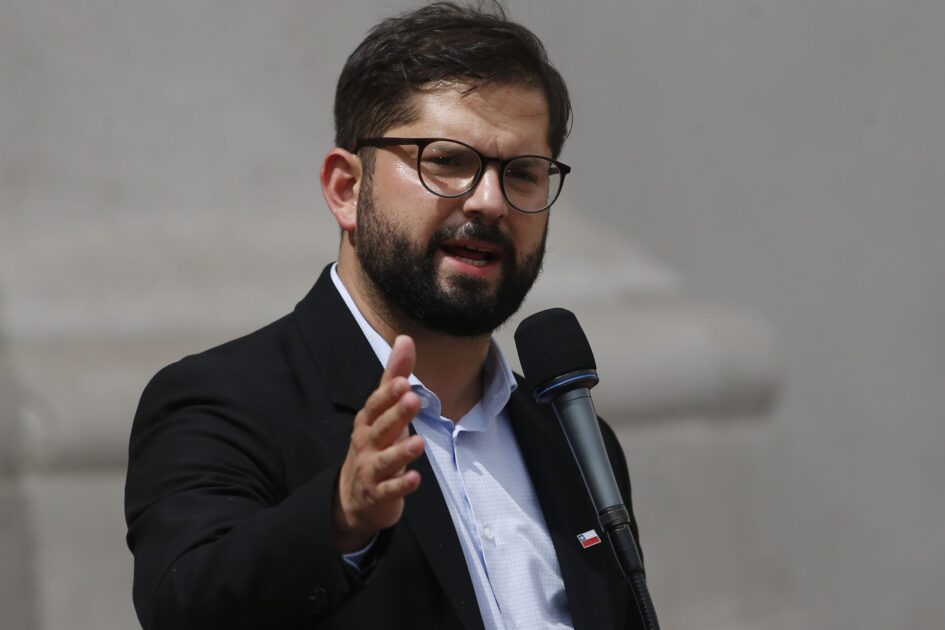 This story originally appeared in Mondoweiss on Jan. 18, 2022. It is shared here with permission.

When Chile announced the results of its presidential elections, Israel and its supporters were not at all pleased with the result. Gabriel Boric, Chile’s pro-Palestine, left-wing contender for the presidency, emerged victorious over the right-wing, pro-Israel Jose Antonio Kast.

A former student leader, 35-year-old Boric rose to prominence during the 2011 mobilizations for free, quality education in Chile. In 2013, Boric was elected to parliament as an independent candidate representing the Magallanes region. Running against Kast in the 2021 presidential elections, his rallying cry to bury neoliberalism reflected the nationwide uprisings against outgoing president Sebastian Pinera.

Boric is also a vociferous critic of Israel and supports the Boycott, Divestment and Sanctions Movement (BDS). In October 2021, after committing to support a bill to sanction goods from Israeli settlements, Boric pledged to take a stronger stance in defense of Palestinian human rights.

In the end Boric defeated Kast by a vote of 56-44 percent signaling that Chilean voters are ready to make a break from the past.

Chile and Palestine share similarities in terms of their struggle with neoliberal violence. Both indigenous populations–the Mapuche of Chile, and Palestinians–face the horrors of Israeli military weapons and surveillance technology. However, the question at this point is whether Boric will align with international consensus over the two-state compromise or maintain his support for Palestinian liberation.

In the Israeli press Boric is being described as antisemitic for his earlier pro-Palestine activism, including direct challenges to the Jewish community in Chile which is largely supportive of the Zionist colonial policies. His links to Daniel Jadue, a Chilean-Palestinian who was also a candidate for the 2021 presidential elections and who is very outspoken against Zionism, have also been raised as objectionable by Israeli media.

Emilio Dabed, a Palestinian-Chilean lawyer who also holds a doctorate in political science and who specializes in constitutional matters, international law and human rights, spoke to Mondoweiss about how Israel’s propaganda is manipulating Boric’s stance, and also shed light on the complexities of Chilean foreign policy towards Israel and Palestine.

“Boric has been accused of antisemitism because he has expressed the view that Israel should withdraw from the occupied Palestinian territory, with his detractors implying that calling for the application of international law is unjust or could amount to antisemitism. Also, in an open letter to Boric by prominent Jewish women in Chile, the elected president was criticized for holding ‘Jews responsible for policies of a government in power in Israel.’ But Israeli propaganda and its supporters insist that Israel represents all Jews, and accuse all Palestinians of being antisemites for criticizing the policies of the state of Israel,” Dabed explained.

“Moreover, the President of the Jewish community in Chile has also criticized Boric for supporting BDS, a non-violent, international law-based initiative to force Israel to abide by its international legal obligations. From the perspective of Israel and Israel’s supporters, calling for the respect of international law is almost a crime, supporting Palestinian rights is antisemitic, and the establishment of a just peace in Palestine is a danger threatening them.”

And yet the doomsday headlines in the Israeli media about Chile electing a pro-Palestine president almost entirely gloss over the fact that Israel would have preferred Kast to win the election, despite the fact that his father, German-born Michael Kast, was a Nazi Party member and whose family was involved in the dictatorship of Augusto Pinochet.

Chilean author and investigative journalist Javier Rebolledo, whose research about the Pinochet dictatorship brought many previously guarded secrets to public scrutiny, states in his book “A La Sombra de Los Cuervos” (In the Shadow of the Crows) that both Kast’s father, as well as one of his brothers, Cristian Kast, were involved with the National Intelligence Directorate (DINA). Kast’s brother, Miguel Kast, was one of the Chicago Boys–the group of economists trained by Milton Friedman who were tasked with the neoliberal experiment in Chile. He was also appointed by Pinochet as Minister of Labor and later President of Chile’s Central Bank.

During the 2017 presidential campaign in Chile, Kast shone a spotlight on himself with his staunch support for Pinochet. “If Pinochet were still alive, he would vote for me,” he boasted. He also proclaimed himself against the closure of the Punta Peuco luxury prison, where former DINA agents and torturers are serving their sentences. Kast’s 2017 campaign was funded by Pinochet supporters, among them the daughter of former DINA agent Marcelo Castro Mendoza.

Israeli media confirmed that out of 111 Chileans in Israel, 73 voted for Kast. Speaking about Boric’s electoral triumph, Gabriel Colodro, the president of Israel’s Chilean community, stated, “There is concern for the Jewish community [in Chile], but we wish him success.”

Israel’s response to the Chilean election is reflective of its own colonial enterprise, and the international diplomatic support it is used to receiving. Israel’s ties to the Pinochet dictatorship, to which it sold weapons when the US decided it was time to distance itself from the crimes against humanity it had funded in Chile, are also part of the legacy between both countries which continues to today.

Both Israel and Chile from the dictatorship onwards, at least until the latter’s previous presidency, thrived upon ignoring the past.

Dabed maps out the impact of this erasure by Israel, and how this played out in terms of the Jewish community’s choice of Kast in the 2021 presidential elections in Chile.

This erasure was also demonstrated by the Chilean community in Israel in its preference for Kast. “The same negative politics operates within a part of the Jewish community in Chile as shown by their choice in the Chilean elections. They mostly voted for Kast. The Chilean community in Israel, for instance, voted almost 70% for Kast, negating the crimes of Pinochet’s dictatorship that Kast supported and still defends, negating the torture, the assassinations, the disappearances of political dissidents during the dictatorship, all of which were carried out with assistance and training from the Israeli state to Pinochet’s security forces,” Dabed explained.

What to expect from the Boric government

Despite Israel attempting to depict the new Chilean presidency as dangerous in terms of its diplomatic relations, Boric will be navigating old and new political terrain, both in terms of Chile’s own turbulent history since the dictatorship and the transition to democracy, as well as its foreign policy.

Chile is home to the largest, and well-organized, Palestinian community in Latin America. Its activism in terms of BDS continues to grow and has influenced Chilean politics. For example, in November 2018 the Chilean congress passed a resolution calling upon the government to review its agreements with Israel and to provide Chileans with information about Israel’s colonial expansion in order to make an informed decision about doing business with Israel or visiting the colonial state.

To view earlier pro-Palestine activism as a game-changer in Chile’s foreign policy, however, is a simplistic view.

“Boric is a young leftist politician who will be confronted during his government by the anti-democratic Chilean right-wing; the same that helped to overthrow the socialist government of Salvador Allende almost 50 years ago, and the establishment of the Pinochet’s dictatorship that they defend until today. In these circumstances it would be very dangerous for Boric to completely alienate the Jewish community of Chile which, by and large, is very influential, supports right-wing politics and voted for Kast. Given the radical changes that Boric has promised and the support that he would need to put them forward, I do not think he would risk more confrontation,” Dabed explained.

“I do not think there will be important changes in the Chilean foreign policy. Regardless of political leanings, Chilean governments have retained the same foreign policy regarding Palestine/Israel. It repeats the mantra established by the international community about the fact that it supports a two-state solution for the conflict. It does so, even when we all know that this strategy has not led Palestinians anywhere. Negotiations for a two-state solution have become the name for maintaining the colonial status quo subjecting Palestinians until today. This discourse has allowed Israel to ignore its commitments during the Oslo negotiations in the sense of exchanging land for peace, and to reach its objective of conquering the land and imposing peace terms that consolidate their colonial project.”

However, Boric’s impact in terms of activism and politics should not be discarded. While the two-state diplomacy dominates political discourse, Chile now has a president that is outwardly aligned with the Palestinian cause, and Chile is well-placed to influence the regional political debate about the Israeli colonization of Palestine.

Dabed concludes, “I also think that Boric coming to power represents tremendous support for Palestinians and the Palestinian community in Chile. Even though he may not change Chilean foreign policy in this respect, he and his team and supporters are aware of the Palestinian colonial condition, they oppose it, and they are not shy in expressing these views. Not only Boric, but many others in his circle know the injustices and crimes that Palestinians are subjected to by the Israeli state, and they are prepared, I hope, to make at least discursive changes in the way Palestine/Israel is viewed and spoken about, and this is not without importance. This could lead to the creation of initiatives at the international level that could bring Palestinian back to the public debate, after so many years of silence in the mainstream media and international forums.”