What is Organizational Materialism? 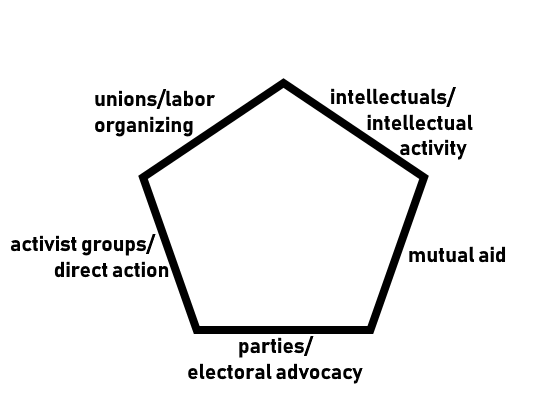 For decades the left has interacted with itself in a way dominated primarily by ideological relations: Trotskyist versus Stalinist, Anarchist vs. Marxist, Maoist versus Social Democrat. But in the wake of the fall of the Soviet Union most of these relationships have persisted despite their signifying no material relationship. Despite the various vainglorious naming schemes, the difference between a Trotskyist and a Maoist reading group is mostly one of words and historical or literary disagreements, rather than a difference based on practice. This is the realization that the heart of organizational materialism: that by analyzing radical and mainstream politics through the lens of practices in organizations instead of the ideological justifications they build up around themselves we can build a materialist understanding of politics.

This material analysis comes from connecting tendencies in radicalism directly to the kinds of practices they commonly engage in.  These practices can usually be reduced to some combination of five practices–intellectual activity, mutual aid, electoral work, direct action, and labor organizing, and the ideologies which emerge from these groups usually emerge after the fact to justify work the group is already doing.  By ignoring most ideological differences and looking purely at practices, organizational materialism allows for an actually materialist analysis of politics and shows just how many disagreements within the left are, more than useless, but signifiers of deeper pathologies.

These organizational practices should not be viewed in a hierarchical way. Any successful radical movement from Cooperation Jackson to Russian socialism consisted of groups which were pushing all of these forms. Which brings us to one of the most important conclusions of Organizational Materialism: that a certain level of fragmentation and division is actually useful so long as those divisions are based on real material differences. Russian social democracy was marked by tremendous fragmentation and internecine hatred, between the Narodniks and Bolsheviks, anarchists and Mensheviks, but without one of these groups the Russian left would not have been able to bring things into a revolutionary situation. Conversely, movements which were dominated by one organization or practice, from the alter globalization movement of the 90s to official communism in Western Europe, were each marked by a tendency towards degradation.

This slow degradation comes from a tendency in movements dominated by a narrow collection of practices and organizations to fall into the problems that characterize that particular practice.  I’ve been writing lately about how this works at the micro level but we can see this from the protest movements of the 90s to the self-destruction of the Communist parties during the Cold War.  What follows from this is that, past a certain point, one cannot simply fix the neuroses and pathologies of a practice within that practice.  The answer to a movement which has too many activist organizations is not necessarily another activist org which does the same thing but better, but a larger diversity of organizations.

On the flip side, successful mainstream political machines have elements of each of these practices within them. Their patronage networks include unions and firms, liberal or conservative newspapers and think tanks which support and develop their views, and Charities and ngos which have by and large replaced the welfare state as a purveyor of aid and now serve the same role that they served in the 19th century during the Golden Age of political machines. While political machines have receded from view as the liberal social sciences have focused on more individualistic ways of analyzing politics, organizational materialism allows us to understand the links that exist within the bodies which currently dominate our urban politics.

This is merely an introduction to a framework I’ve worked on elsewhere, notably in the Left Wind where I published Organizational Materialism in all its 20+ pages.  If you’re interested in an expansion of these ideas I would start there.  But there are notable gaps in this framework, which myself and other comrades are working on.  With this space I’m going to write a series of smaller articles (ideally this size) expanding on the concepts I laid out in that paper, and I hope y’all come along for the ride.