What Is the Florida Anti-LGBTQIA+ Bill and How Can We Fight Back? 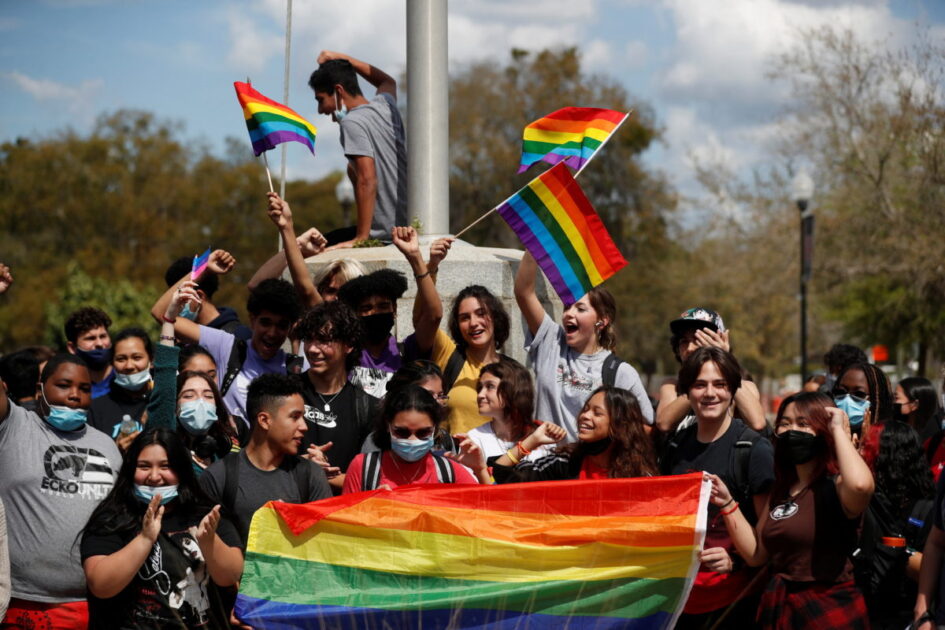 By: The APL LGBTQIA+ Commission and APL Florida

In recent months, an unprecedented amount of anti-LGBTQIA+ legislation has appeared across the country in dozens of states. One of the newest attacks has arisen from Florida where HB 1557, more commonly known as the “Don’t Say Gay” bill, was passed by the state’s Republican-dominated legislature and just signed into law by Gov. Ron DeSantis. This reactionary measure targets LGBTQIA+ youth in Florida on multiple levels, leaving little room for supportive and affirming measures. The bill itself reads:

“Classroom instruction by school personnel or third parties on sexual orientation or gender identity may not occur in kindergarten through grade 3 or in a manner that is not age appropriate or developmentally appropriate for students in accordance with state standards.”

This vague language undoubtedly will be used to attack the validity and existence of the LGBTQIA+ community within the state of Florida. By calling educational measures concerning  LGBTQIA+ people “not age appropriate,” the reactionaries in the Florida legislature have opened the door to full censorship of the discussion of LGBTQIA+ relationships and the problems faced by non-heteronormative individuals. The precedent for doing this has already been established in Texas, where Gov. Greg Abbott instituted rules that treat gender-affirming medical treatment for transgender minors as “child abuse” to be investigated by the state and Attorney General Ken Paxton attempted to squash Pride Week events in the Austin public schools, claiming they were “sex education.”

The Florida law, in effect, treats children as the “property” of their parents, directly alienating them from their own rights to free access to education and information at the behest of their parents’ demands. In response, during the first week of March, thousands of Florida public school students throughout the state organized walkouts and demonstrations protesting HB 1557, showing a clear will to take control of their education and a popular respect for the identities and safety of their LGBTQIA+ peers.

This bill is also designed to “out” students to their parents if they disclose to teachers or other school employees that they are themselves LGBTQIA+, with an exception to the measure if the school employee thinks that such a disclosure could lead to a dangerous living situation (which may not in itself be so obvious).

This legislation has been labeled as a “parental rights” bill, but this is extremely misleading. This bill gives a great deal of authority to parents who hold bigoted and religiously-based transphobic and homophobic opinions while leaving parents who  support LGBTQIA+ rights powerless to deal with the onslaught of intolerant parents who threaten the educational integrity of the public school system. As a basic principle, children are not and should not be considered the property of their parents. Children fundamentally deserve intellectual autonomy as developing human beings. Any bill that is framed around “parental rights” that simultaneously contradicts the intellectual autonomy of children also directly contradicts the basic human rights of children themselves!

“I, as a trans Florida student, feel absolutely threatened with this ‘Don’t Say Gay’ bill passed by Rep. Joe Harding. This bill could kill thousands of innocent teens who don’t deserve this. They don’t deserve to be treated like second-class creatures. They don’t deserve to be treated like anything else other than an American. This bill and Rep. Harding are a danger to the innocent youth of Florida. They seek to silence LGBTQ+ youth with their bigotry and raw hatred. … This country has proven itself many times to fail its people.”

It’s important to remember that anti-LGBTQ+ politicians have gained and kept power with the financial backing of opportunistic and bigoted corporate elites. The Walt Disney Co. itself has caught backlash for its generous campaign contributions to the bill’s backers. In the 2020 election cycle, it gave money to every sponsor and co-sponsor of the bill, according to the Orlando Sentinel. Disney workers walked off their jobsites in protest as a result of the failure of the company to actively oppose this measure from its inception. After a concerted campaign of protest by the LGBTQIA+ community and numerous Disney employees and the walk outs, Disney’s CEO spoke out against the bill although by then it was too late for his new-found opposition to have any real effect.

The American Party of Labor and its LGBTQIA+ Commission will continue to monitor this ongoing situation as the legislative attacks on our nation’s queer community by right-wing politicians continue to mount and we will do everything in our power to oppose them wherever they may arise. We, as working-class advocates, will make our voices heard in opposition to this tide of anti-LGBTQ+ chauvinism. And we urge local school boards and the Florida Department of Education to find the political courage to refuse to implement the provisions of this bigoted legislation. (A good example was the school boards in Florida that refused to uphold Gov. DeSantis’ anti-masking rules.) We must protect the human rights and dignity of Florida’s LGBTQIA+ students and the educational integrity of its public schools, including their ability to openly and honestly discuss LGBTQIA+ topics.